Spring has sprung! Hey, that reminds me of a little ditty from my childhood:

Spring has sprung,
The grass is riz,
I wonder where the bridies iz?!
I know, I know. The weird stuff in my brain is never-ending.

For those of you still here, I was going to post a bunch of photos I've taken the past few days. DC is GOR-JUS this time of year, and it gets better and better every day. But you got lucky and I actually finished a card, so I'll share that instead.

My friend Phyllis is turning 50 on Sunday. Since I am older than she is, I am taking a certain license with how much fun I make of this milestone in her life. For starters, I thought I'd make her a card. (Imagine that.)

Did you know that card MAKERS are the absolute worst card SENDERS? It's true! I think we've even discussed this before. We have a bazillion cards everywhere, so you'd think we would just grab one and send it, right? WRONG! When making a special card, like for someone we KNOW, just any old card will not do. Nope, it needs to be special for that special person. Most of the time we run OUT of time and end up sending nothing at all.

So why, you ask, do I bring this up now? Have you checked your calendar? Today is Thursday, and it is Thursday NIGHT here on the right coast of the USofA. That means there are only two days remaining that mail MIGHT be handled and maybe delivered. Oh, did I mention she is IN A FOREIGN COUNTRY, like ACROSS SEVERAL OCEANS? Yeah, this will be late.

So ANYway, this is what I've made over the past few days: 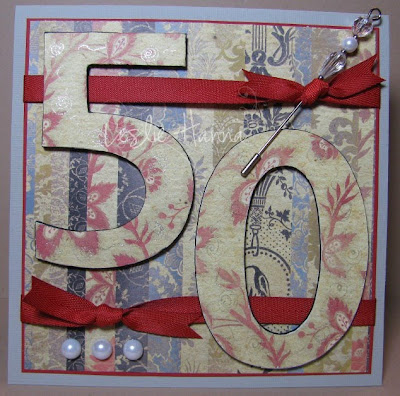 Her favorite color is green, so naturally I selected a vintage-y paper with no green in it what-so-ever. I did get lucky, though, because the 6x6 scrap of striped paper was laying right next to a piece of the yellow & pink-ish paper, and I just happened to notice they coordinated! Yep! That third in from the left stripe on the background paper is the same as the piece I used to cover the numbers. (yay!)

This was hard. Real hard. I cannot remember when I've futzed quite so much with two pieces of chipboard. But I persevered and I think it came out fine. I ended up coloring the edge of the chipboard with a black marker in an attempt to get some contrast.

I was quite proud of myself for using some of my Pretties kit - this may be the first time I've used one of the stick pins. 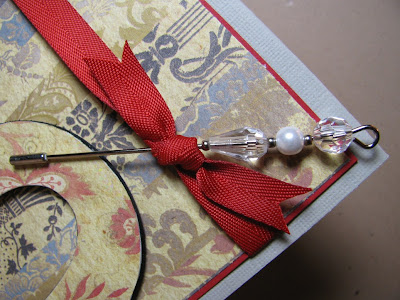 The last thing I did was add some swirls to the numbers with a glitter pen. See: 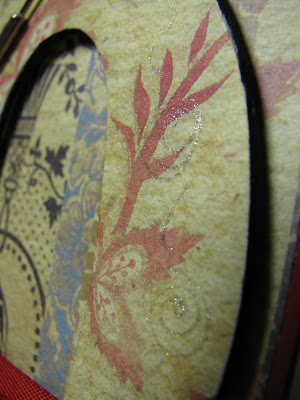 This marvelous, glittery suggestion came from one of my Tweeps, @paperbatty, who I am actually going to get to meet in late April. YAY!

Then, because the outside of the card was so pretty, I decided to be just myself, and I stamped this on the inside: 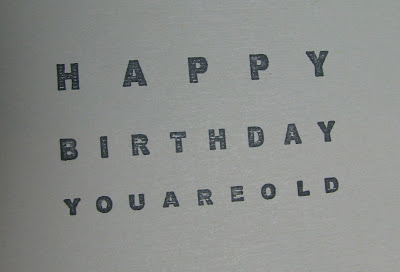 It's actually straight on the card (no, really, it is!); I just turned the camera so the image was not in a shadow. (Seriously, it is straight ...)

As an added bonus, let's examine the elephant in the room: 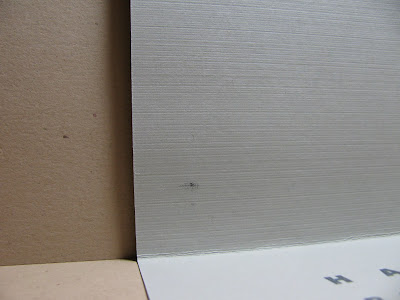 See anything out of order here? Let's take a closer look: 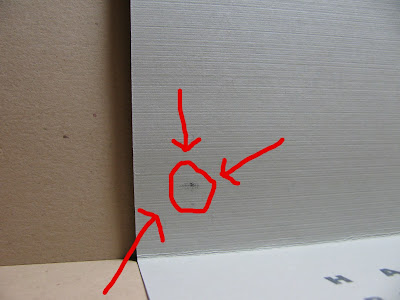 Yep! I schmeared ink on the inside. I am an idiot. Ah, well, since there are no mistakes in stamping, only opportunities for embellishment, I see an opportunity here. Big time.

Now I need to go make another card for my April Stamp Camps. I'll be back when I've made one, or I may slip in those blooming bushes and trees photos. You'll be able to gauge my success based on what I post next. ;-)

Thanks for stopping by!
Posted by Leslie Hanna at 7:53 PM