The Remains Of The Day

Today was my standard Tuesday off after my weekend of Stamp Camps. But before I get to today's adventures, let's take a peek at what we did Sunday & Monday, shall we?

Here is my standard Mis En Place - everything was cut and neatly stacked in front of their respective serving suggestion and necessary supplies. 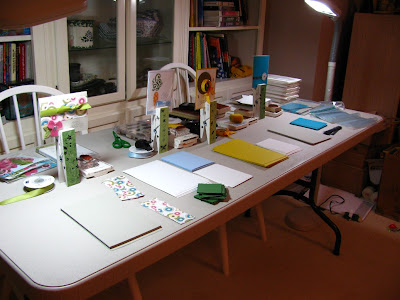 After assembly of the kits, I found it necessary this month to set up an auxiliary station in the Kitchen: 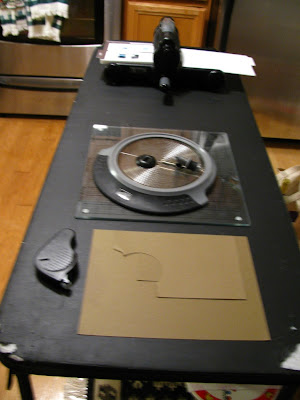 I needed the Big Shot for a texture plate, and the circle cutter to, well, cut a circle. I decided I was not going to pre-prep this time, so this station was needed.

As always, several people found the urge to deviate from my suggested cards, which is not only fine, it is encouraged! Here is my original sample of this card: 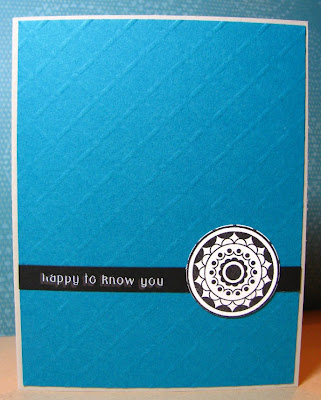 For theirs, though, they were supposed to use the 1 1/4" circle punch instead of the 1 3/8" punch I used here, then layer that on a 1 3/8" black circle. Here is what one crafty lady did, that was then copied by a bunch of others: 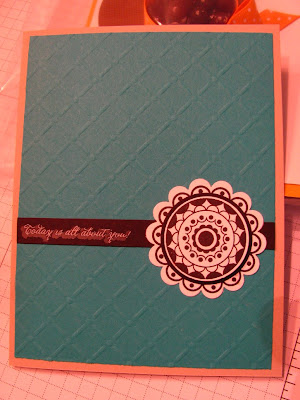 (Please excuse the lighting ...) She asked for the Scallop punch and punched out the remaining scallop edge and layered the circles on top of it with Dimensionals. Lookie: 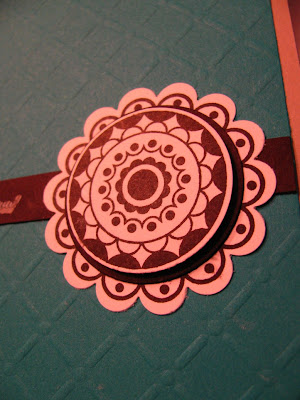 Niiiiice. Most of the Ladies did the same thing, or at least took the scalloped piece home. Then in walked BR#2. Now you must understand she has been stamping since they used hammer & chisel, and she sees my serving suggestions not as suggestions, but as challenges. That's right... as in, " how different can I make this before she kicks me out?" Check out her version of this card: 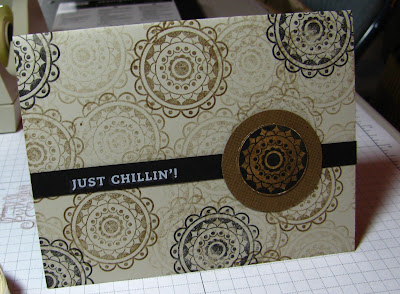 I love when people are comfortable enough to step this far out of the box. She's a little scary sometimes, but the result is always fun.

Then we had this card: 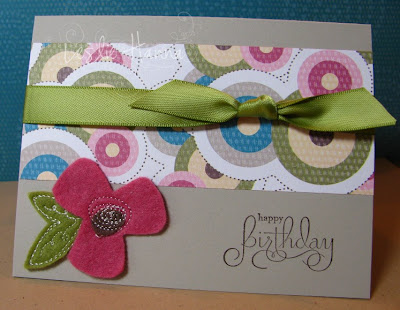 I was going for simple, yet classy. Some people mixed up the felt flowers a little bit by using some different ones from the pack, and one person just flipped it on its side like this: 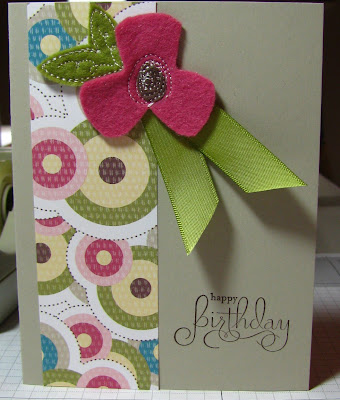 ... and used a ribbon scrap as an additional accent. Very clever! And less waste for me!

After Monday night's session, I actually cleaned up the three tables and this is what I had left at the end of the clean-up effort: 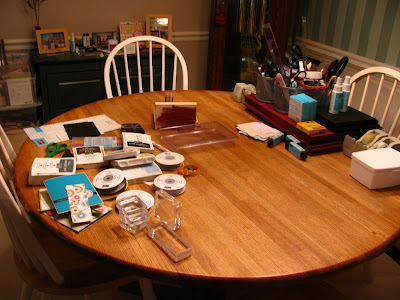 That's it! Just the inks, ribbons, blocks, and a few stamps that were waiting for me to find their boxes. Oh, that stuff in the back (on the right, really)? That lives there. I have no where else to put them, so they live here permanently.

In other news, I did leave the house on Saturday to run a few errands, and along the way I saw this car: 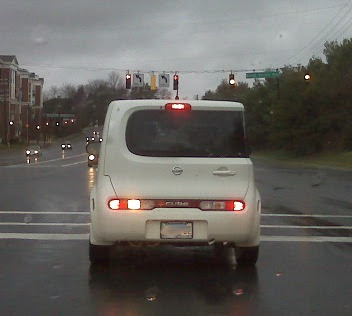 I am intrigued by this car - A Nissan Cube. I've seen them before, but I never noticed the back has a really bad blind spot on the driver's side. Weird.

I saw this in a parking lot. Whoa: 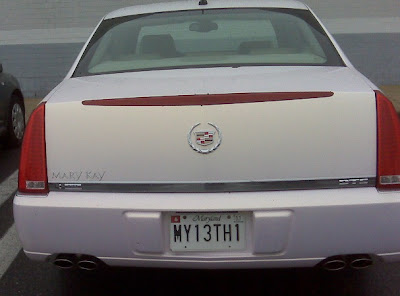 Then today. I must tell you about today. Day off, right? So I had scheduled Sears to come out and figure out why my oven was flashing the F-10 error code. I looked it up before I called, and it has something to do with electronics. Given that I have a healthy respect for electricity, I made the call to have a professional come look at it. He came, he looked, he said nothing was wrong. He could replace the electronics and see if that made it stop, but suggested I save myself the money and just use the oven and call back if it happens again within 90 days. If it does, the almost $100 I paid for him to show up will be applied to my repair bill. Well, that was nice.

So I went to the store to buy food I could cook. I KNOW! I went to a different store than my usual one, since I had also stopped at Chloe's to see if any cards sold (9 - NINE - sold! Woo-hoo!). This store has the self-scan-while-you-shop gizmo: 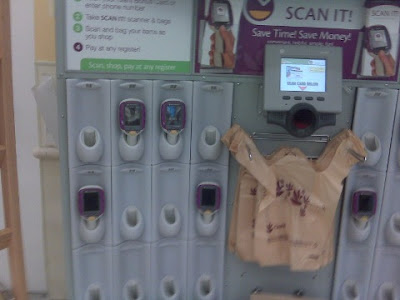 Since it was a Tuesday afternoon, and there were actually more employees in the store than shoppers, I took a chance. I mean, I am a computer person, right? And I've seen the check-out people scan my items for a bazillion years, right? And I can wand stuff at IKEA and even at the self-check-out at the grocery, right? So how hard could this be, right? RIGHT?

Look at this thing:

It has a "shoot" button, right under where her thumb is. You line it up with the bar code, scan the item, then put it in a bag in your cart. At the end of your shopping trip, you scan the END bar code at the register, and pay. Your stuff is already bagged and you are done. Simple, non?

NO! I either got a bum scanner, or I am not smarter than the average bear. It literally worked every other time. I picked up two of the same item and it only scanned one of them. I asked for help. I asked for help with almost every freakin' item I picked up. I decided I was not meant to buy most of it and put it back if it would not scan. Interesting diet technique, don't you agree? You are only allowed to buy what scans, and the rest you have to put back.

Finally I gave up, and in utter frustration I only tried scanning a new item one time, and if it didn't scan, I put it in my basket instead of in a bag. People were laughing at me. Okay, not AT me, but WITH me. One lady watched me frantically scan one of two items, and repeatedly fail with the second one. I exclaimed that I was apparently not smarter than the scanner, to which she replied, Yes, I was, but that second item was obviously free. Interesting approach, I thought.

Oh, and the idea of dealing with loose items in Produce? Didn't happen. Not gonna go there.

So I got to a checkout with two bags half-full, a bunch of unscanned items in my basket, the scanner in my limp left hand, a pleading look on my face, and I exclaimed, "I've failed!!!!" He gently took the scanner from my paw and threw it unceremoniously onto the back of his area, instructed me to please empty ALL of my items onto the conveyor, and he checked me out the old-fashioned way.

I got home and had a glass of wine. Seriously. Can you imagine that adventure on a weekend, with a bunch of people pushing me out of the way and telling me to hurry up? Nu-uh.

So because I've had copious amounts of wine this evening, I thought it best to NOT start my 2009 taxes. I'll worry about them tomorrow.

Oh, are you still reading? Hey, thanks! I'm signing off now, and I hope to get inky again later this week so I have something of substance to show you.

Thanks for stopping by!
Posted by Leslie Hanna at 8:01 PM