I stamped something! Really, I did! Lookie: 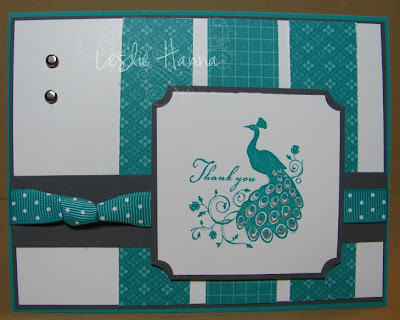 This is a total CASE of this card. She used Nestabilities for her beautiful layers, but as we all know, Nesties are considered "contraband" in an SU workshop, so I had to come up with something else.

Thursday night, while I was working on this (see? I told you it takes me 3 days to make a card!) I decided to leave the layer a square and just round the corners. Idiot that I am, I used the Ticket Corner punch instead of the Corner Rounder. That's the point where I tossed the piece onto what's left of my work area on the Captain's Table and called it a night. My CASE had failed, so I did a meme instead.

But LAST night, I got a clue! I embraced my happy Ticket Corner mistake and added a Basic Gray layer behind it. What you don't know is that I was an idiot yet again, and I put the dimensionals behind the grey layer before I punched the grey corners, and the punch didn't fit! I had to cut the corners by hand. Oh, the sacrifices I make for my craft...

I also opted for just a knot instead of a bow. As a workshop card, The Ladies will appreciate the no-bow on a project.

In keeping with my "no contraband" theme, I could not use the silver pearls she used, and while SU now has bling, it's only in the one kit, and I certainly don't have enough to go around, so I opted instead to use silver brads on the left, and the - OH, CARP, we don't carry the Ziggy gold/silver pen any more. FOOEY! Ah, well, I used it here on the peacock's tail. Well, it used to be an SU product.

On that note, I think I'll see if I can spend some time out doors today. It's supposed to be 72 here on the Right Coast, and I love it!!!! Happy Spring!

Have a good day, and thanks for stopping by!
Posted by Leslie Hanna at 9:03 AM