What I am about to show you is real. Do not adjust your monitor*. In fact, those of you who are not of the crafty variety might just want to look away. Hmm, on second thought: no, please stick around, as this may explain a lot about a crafty person in your life.

This, my friends, is what can be referred to as "sensory overload": 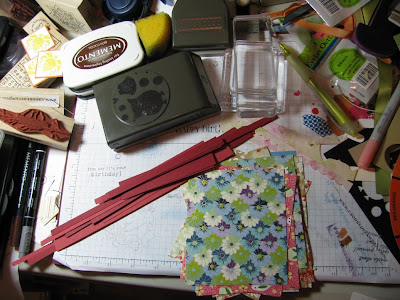 No, this was not staged. Yes, this is a perfect example of too many ideas coming together in one place, and too fast. So fast, in fact, they run into each other, causing major distractions, so the crafter loses focus, thus spiraling totally out of control. As each "oh, I want to do that" is added to the pile, work space begins to disappear, and nothing actually gets accomplished. (Oh, look: shiny.)

On this work space I have evidence of at least 6 projects and project wannabes, some of which are only a few pieces of scraps. Let's do the numbers: 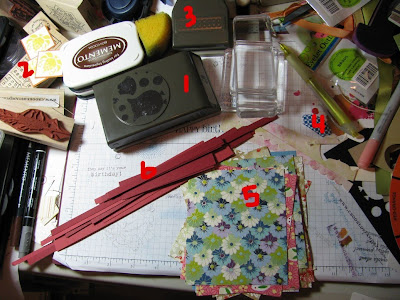 1. My owl punch. It is out for several reasons: (a) I used him to punch out several different pieces of new DSP to see about mixing and matching papers. See also (4). (b) I read something about using the owl punch to make tulips, and I want to try it; could be a potential card for an upcoming Stamp Camp. (c) I haven't bothered to put it away yet.
2. Three stamped and matted images destined to be put on a card. I stamped them plus three others that I rock-n-rolled and I used those three instead of these. These languish, ignored.
3. My new scallop lace punch. Yes, it has been used. Yes, the resulting paper is ... around here somewhere. Drat - that would have been (7).
4. A pile of owl parts in varying colors and patterns that will some day be magically combined into AWESOME owls. Or tulips.
5. A pile of pretty paper that I finished cutting in preparation for making the rest of my pretty paper cards. I did make them, but first I was distracted by ...
6. A bunch of strips of red card stock. Normally, this would = trash in my world, but when I saw them all nice in a pile next to my paper cutter, I didn't have the heart to toss them. That little confused voice in my head started repeating things about being wasteful and I began channeling my Mother, so I saved the little buggers because "I just KNOW I can use them, somehow!"

Yes, we are spiraling and out of control.

Over the past few evenings I have played with various items on this work space, and tonight I ended up with ... um ... something. You tell me what this is: 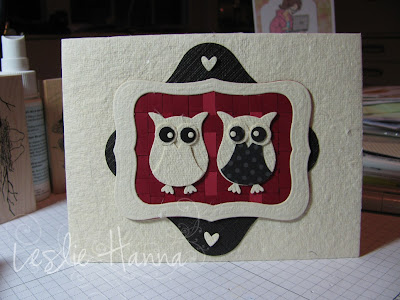 I called the photo "Wedding Owls", and I do believe I've seen several examples of owls dressed up with bow ties, etc., as I've blurfed this past weekend, but there is also a lot more going on here. Mostly: texture. 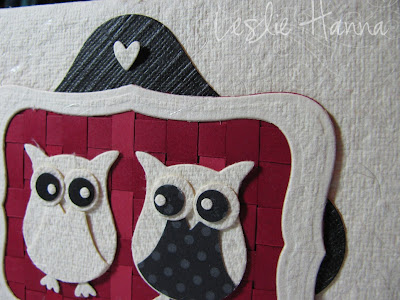 Sigh. I started with a handmade paper card that is really thick and I can never figure out what to do with them, but I bought a bunch of them from June's stash so I have them, k?

Then I wove all those red strips (two different colors, so I decided I liked it that way), then spent an inordinate amount of time sticking it all down to something, cutting it, etc.

Then I cut into another one of the cards to make a frame for the red piece.

That black layer is some Core'Dinations card stock that was die-cut with a Nestie. Then, since there wasn't enough texture going on already, I ran the piece of textured black card stock through the Big Shot with an SU texture plate.

Then I set it aside and worked on something else.

Last night I started futzing with the owl parts, and then, since I could, I punched two more owls out of the partly-cut-up card and these owls came into being. I stuck the two hearts onto the black piece, mostly because they were there and I thought the card needed something.

I still think it needs something. I'm thinking the word "Love" needs to be in the bottom right corner. How to accomplish that, I'm not so sure. But the card is still on my work space, taunting me, and I'll move on to something else while it waits for me to figure it out.

Another thought while I stared at it tonight: It's kindof "dark". You know, black and red? Is that too weird? Would someone, perhaps of the vampire-lover type, get a card like this?

So, what do you think? Not about the distraction part, because I think all crafters suffer from some form of ADD**, but about the card. Should I cut my losses, or do you think someone would buy it? ... ... ...

In other news, my SU workshop order arrived, as well as an order from My Favorite Things. Like I need more stuff, right? As soon as any of it hits paper, I'll be sure to share with you! :)

That's all I have for this evening. Thanks for stopping by!

* For those of you not old enough to remember, that was a take-off of the introduction to the old Twilight Zone show. The black & white ones.

** About that ADD? Think about it ... if we didn't have it, and weren't constantly distracted by pretty things, would we be single-handedly supporting this industry? Well, would we?!
Posted by Leslie Hanna at 8:30 PM