I had a busy day today! And except for the fact that I failed to get stampy, I did get a lot of stuff done. The BESTEST part of today was my Tweet-up with @patriciamonkey in St Michaels, on Maryland's Eastern shore. It's a 2-hour drive for me, but it is quite scenic, and, more importantly, it's in the opposite direction of all the commuting traffic. YAY!

Our destination was The Crab Claw restaurant where we ordered this: 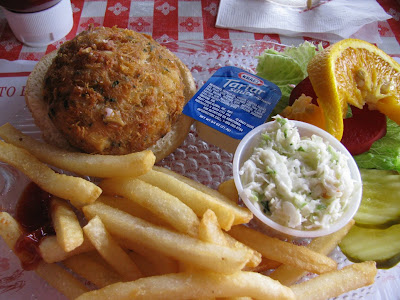 That, my friends, is a Maryland crab cake, and one of the best I have ever had. My friends and I used to bike on the Eastern Shore, starting and ending in St Michaels, because The Crab Claw is at the end of the street, right on the water. Some of the guys went on the 30-mile ride (the Eastern Shore is FLAT, and has W-I-D-E shoulders for biking) JUST so they could get crab cakes and beer at the end of the day. I have to admit, though, after a 2-hour drive, 4 hours of biking, lots of good food and maybe some beer, that 2-hour drive home was a killer. But we slept good that night.

ANYway, I digress. Patti and I had this fabulous lunch, surrounded by no fewer than 394 cackling teachers on safari. But it was so great to get together, we didn't mind screaming at each other or repeating ourselves ("Eh? WHAT?!!") to be heard. Much.

After lunch we went outside to check out the boats we'd been watching through the windows. Like this one: 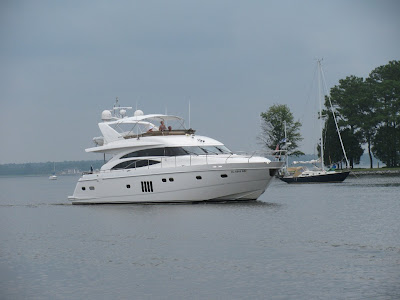 Boats can dock right next to the restaurant: 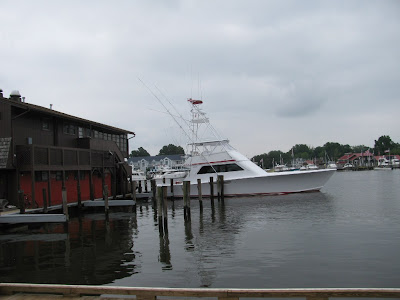 In fact, back to the biking story, we would come around the corner of the building and look for an outside table next to the water. One time all the tables were marked "Reserved". When we asked how to reserve a table, they said call two weeks ahead, and show up on one of those (pointing to a yacht). We ate inside.

As Patti and I walked up towards town, she spotted this bunny in a yard: 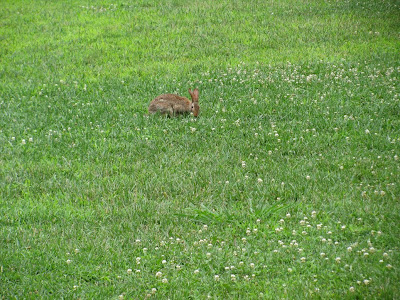 St Michaels is a cool little touristy place, so we walked along the main drag checking out some shops. She spotted these boots outside one of the shops: 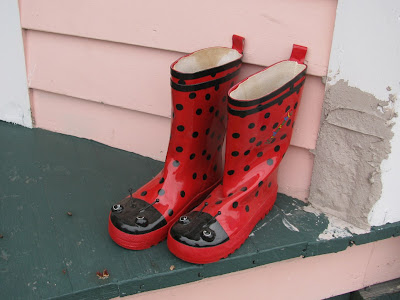 ... and then we saw these kitties: 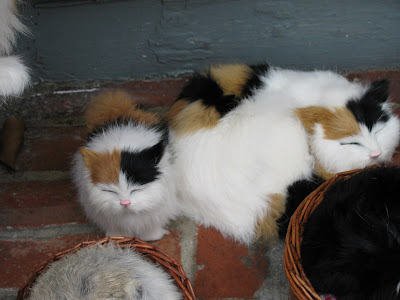 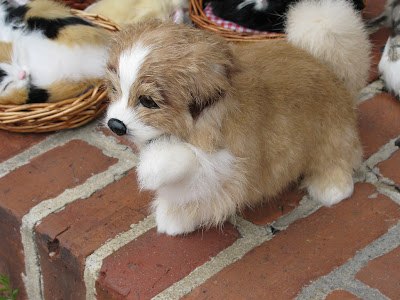 Then we realized that for being a town on the bay it was pretty darn H O T, as in, "We're m e l t i n g!", so we headed back, said goodbye, and hopped into our respective air-conditioned vehicles to head outta town.

I have to cross the Bay Bridge to get there and back, and there is no stopping permitted on the bridge (unless you want to DIE), so as soon as I hit the mainland, I stopped at Sandy Point State Park. In all the years I've lived here, I've never been to this park, so a Tuesday afternoon in July seemed like the right time to give it a try. The main reason I wanted to go there was the park is right next to the bridge on the Bay, so what better place to take a photo of the bridge?

Well, I didn't do it justice (surprise): 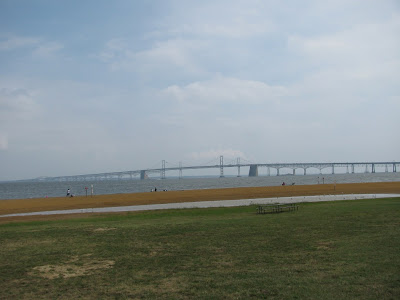 This bridge is 4.2 (or maybe 4.3) miles long. I know these things because I've walked it. Twice. There is an annual Bay Bridge Walk in early May where they close the Eastbound span of the bridge, bus us across, and we walk back. Standing in the middle of the bridge overlooking the Bay is an awesome experience. So anyway, I needed to take a picture, and I did. I can check it and the Sandy Point State Park off my bucket list.

I also took this next photo, mostly because I could. And I love lighthouses, or whatever this thing is: 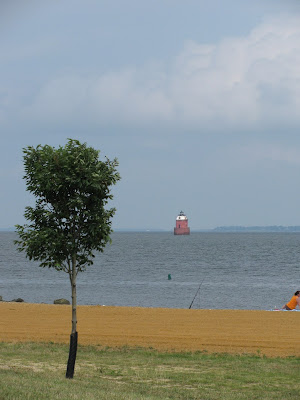 On my list of things to do today was to stop off at The Paper Source just West of Annapolis. I found it. Lookie what they have: 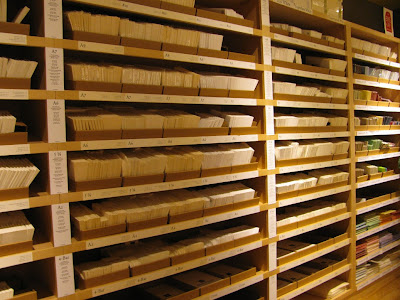 Can you say "envelopes"? O.M.G. It's like I'd died and gone to envelope heaven. I've been to The Paper Source in Georgetown (DC), but I wasn't looking for envelopes, so this never registered in my pea-brain. This is just part of the neutrals section. I turned around to get a shot of part of the colors section: 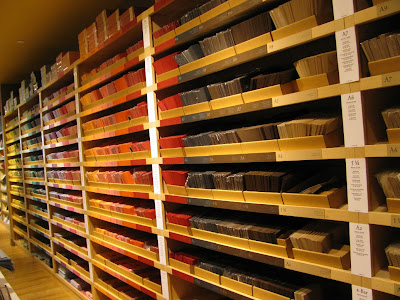 Like I said, "O.M.G." And the nice lady spoke in tongues, so I fell in love with her. I said I needed envelopes for 5x7 cards, so I assumed that was 5.25 x 7.25, to which she replied, "Oh, of course, an A7." See? Tongues. She spoke my language! Then she went on to explain all the different whites they have. I think I was getting a little weak in the knees.

So yes, I got my envelopes for my pig cards, and a few extra since I was there. And since I was there, and it was air conditioned, I looked around. Remember how I say I have paper to last me more than my lifetime? SABLE? Supplies Available Beyond Life Expectancy? Um-hm. Remember me mentioning Parent Sheets? Let's just say they need to be rolled up to be transported. I have a large collection already, and I don't need more. Nope, I don't.

Well, maybe one. Or two. HEY, they matched the Poppy Parade color! Okay, maybe three - another Poppy one. Wait - one more ... it goes with the new Grape card stock that I'm having a heck of a time learning to love. Just four more, that's all. I really did stop at four. Oh, wait, maybe it was five, since I got that sheet with the big owls on it. But then I stopped, paid, and left. The end.

All shall be revealed once I cut into them. I will show you what a smart purchase they were. Yes, I will. Promise.

When I got home, look what was in my mail: 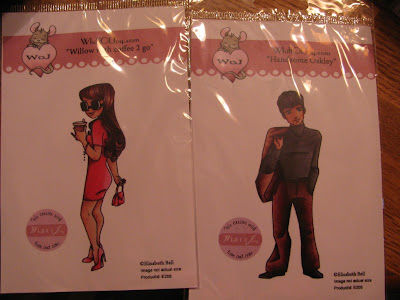 New stamps! I usually don't like the Whiff of Joy images, but these two have potential for that pesky Tween group that's so difficult for card-makers. They now live temporarily on The Captain's Table, right in the middle of my workspace, so hopefully I will use them.

So that was my day. Now I need to go to bed so I can ... go to ... w o r k tomorrow morning. The only problem with a 5-day weekend is people expect me to be all rested and ready to jump back in where I left off last Thursday. Not gonna happen. In fact, I might need an extra cuppa to kick-start me tomorrow morning.

Thanks for stopping by!
Posted by Leslie Hanna at 8:32 PM