Day four of my 5-day weekend is coming to a close. So sad. I feel like I've accomplished a lot, but not nearly all of what I'd hoped to get done. Isn't that always the way things go? I traditionally get to about half of my list. Yeah, I'm about on target.

What I find amazing is that when I don't have to wake up for any particular reason in the morning, I manage wake up WAY before the alarm would go off, if I'd set it. Seriously. I'm getting up earlier than I would if I was (were) going to work, and I get out of bed and do things around the condo. I am productive! BEFORE COFFEE!

I had two Stamp Camps yesterday and one tonight, but since I didn't go to work, I got stampy during the day. Before we get to that, though, let me show you something ... see these two markers: 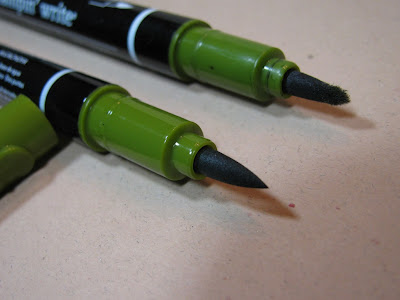 Can you see the difference, subtle though it may be? The one in the back is fuzzy, and I don't mean like I took another bad photo. I mean fuzzy as in "not pointy". Yeah, I'd noticed when making one of this month's cards that the tip of my Artichoke marker was, er, um ... can I say "flaccid" on a G-Rated blog? As soon as I'd touch the marker to the stamp to color it, it bent and was pretty much worthless.

I actually didn't think too much about it until I broke out one of my new markers to color the same stamp, and noticed it was pointy. Then I realized ALL of my new markers were pointy. Yep. That's when it hit me: time for new markers. So last week, during my "let's expedite 3 or 4 orders because I keep forgetting things I need RIGHT NOW" period, I added in a new Artichoke marker. This led to that photo above, and a show-and-tell moment for The Ladies at this month's Stamp Camps.

(See how I tied that all up nicely? Eventually?)

So ANYway, here was this month's Mis En Place: 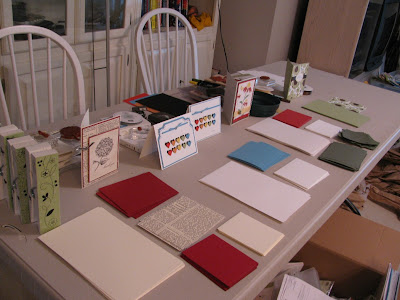 Most months I end up with at least one project that shares a punch, or an ink pad, or something, with another project. This month I was so proud of myself for not doing that, until I was prepping the parts-is-parts for this card: 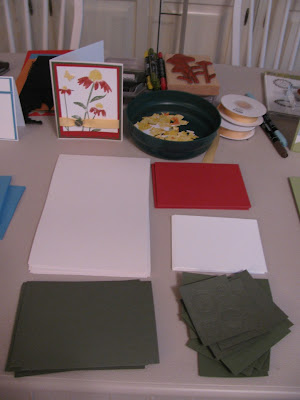 Yeah, there's a lot of parts here. That's because there are three parts that needed the Big Shot to accomplish: the die-cut buttons (bottom right), the die-cut butterflies (in the green bowl, back right) and the texture plate used on the stamped white layer.

The logistics of having The Ladies do all three of these was mind-boggling, and as several of them pointed out this evening: the line for the Big Shot would have been huge. So I saved a lot of nerves by prepping two of the three parts myself and including them with the kits.

Finally, Sunday arrived and I had to open a window for kitty. She has a little roost on the kitchen window where she likes to sun in the mornings: 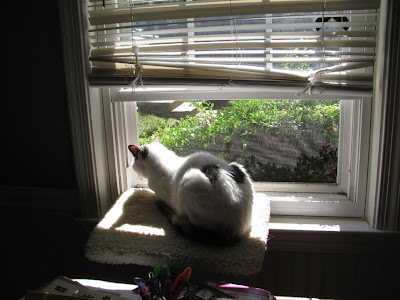 All together now: Awwwwwwwww. Yeah, she is a sweetie.

So today I was stampy. First up, remember this card: 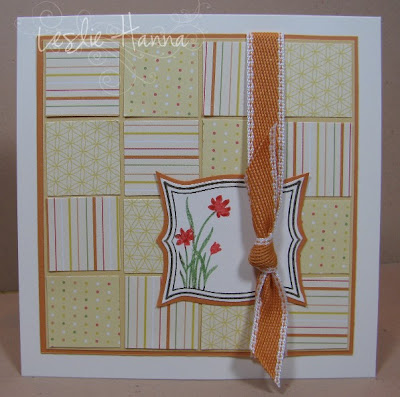 Yeah - pretty awful. So awful, in fact, I gave myself a do-over, and that one fared better. But today, the failed version was sitting on what was left of my work space on the Captain's Table, and I needed to make a decision. Should I toss it, or should I try to save it. I opted for the save.

And here it is: 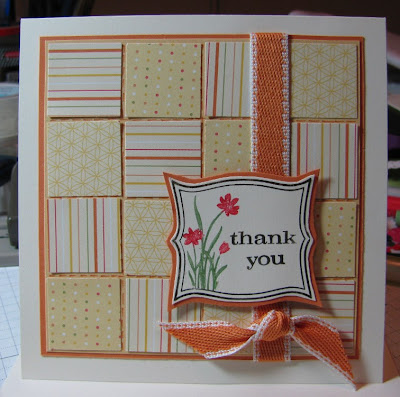 What I changed: I did NOT move any of the squares; they are still crooked. I did take my Peach marker (I LOVE that the In Colors have markers!) and drew dashes (faux stitches) between the crooked squares. I ripped off the stamped image and re-did it, adding a sentiment. And I re-did the ribbon - I wrapped it flat, joining the ends under the sentiment panel that is now raised up on Dimensionals. The knot is a separate piece of ribbon, and was stuck on with a few glue dots. I called it DONE.

Moving right along, I wanted to crack open my Blueberry Crisp papers, so I took out one sheet and cut it into 6 pieces, then I made this: 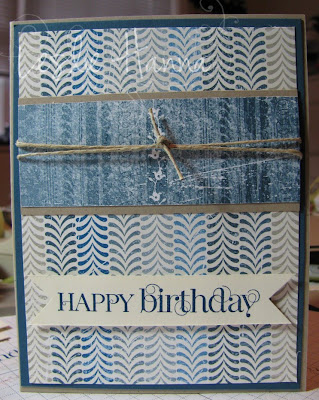 The blue layer is Not Quite Navy, and the base is Kraft (mine is still called Kraft, because I am still using old card stock, but the new color name is Crumb Cake.) The horizontal strip is the reverse side of the DSP. The sentiment is from the new Curly Cute sentiment set.

Drat. I was going for a manly card, and I used a stamp from "Curly Cute". What do you think? Is that sentiment too cutesy for this card? I dunno. I think it works. Okay, let's forget that it's called Curly Cute. That was easy.

Then I got really crazy and flipped over the DSP and made this: 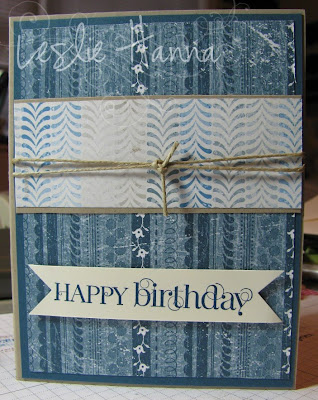 Maybe even more manly than that first one. Maybe. I still have the Curly Cute thing to deal with. Sigh. And are those flowers in the patterned paper? Double-sigh. Oh, and this card is a contender for next month's Stamp Camps, and it was made before this month's stamp camps were behind me. Crazy, I KNOW!

I had enough parts for 4 more cards: 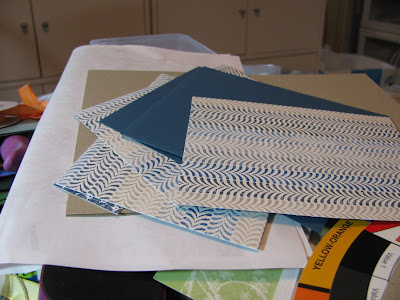 ... but then I got distracted.

Do you see those brightly-colored bird brads between my stamp and the tape dispenser? 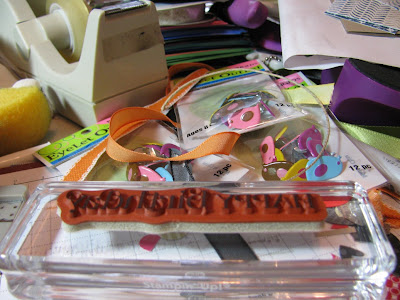 This is what's known in the biz as an "Oh, shiny!" moment, otherwise known as a distraction. Or creative avoidance. Here they are, up close and personal: 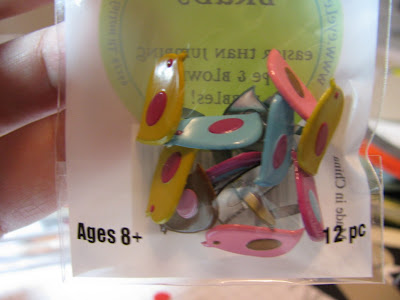 Oh, look ... Ages 8+ ... I'm safe. Aren't they cute? The devilish online store where I recently dropped part of my disposable income had these featured on one of their pages, and I had to have them. I bought 3 packages.

Check out their packaging: 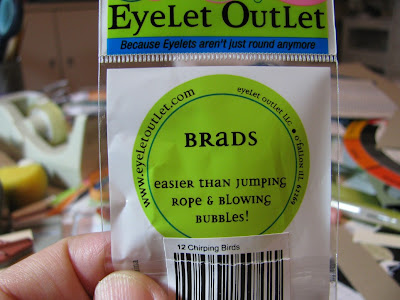 Can YOU jump rope and blow bubbles? Well, I could a looooooong time ago. Today? Not so much.

This is the stamp image the online store had used with these brads: 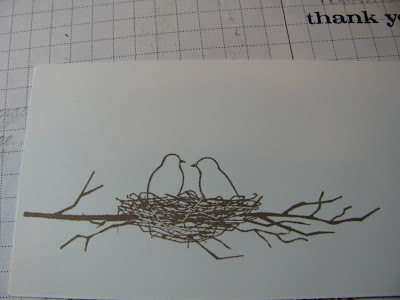 I did a test run: 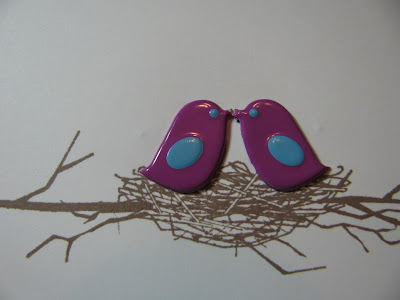 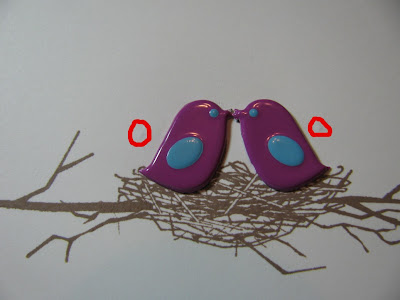 These two red circles point out where I folded open the backs of the brads so well that they poked back through the card stock... like I don't know my own strength. I rescued the brads from that scrap of card stock and ended up with this: 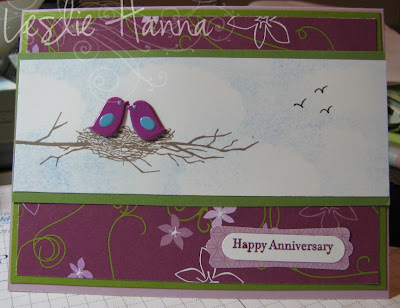 I actually used some of my Cottage Wall DSP. And did you notice? No ribbon! I considered putting it around the right side of the white strip, but I ended up drawing in birds-in-flight instead. It pained me, but I did it. (Oh, look, the sentiment is crooked. )

Now that you've wasted a perfectly good 5 minutes reading this far, I thank you for still reading at all.

Tomorrow is day 5 of 5 of my long weekend, and I plan to spend part of it driving to St Michaels, on Maryland's Eastern Shore, to have lunch with one of my Tweeps. On the way I plan to stop at The Paper Source outside Annapolis to get some 5.25 x 7.25 envelopes. Lots of them. The rest of the day I hope to get stampy some more and mentally prepare myself for going back to work on Wednesday. This will not be pretty.

Thanks for stopping by!
Posted by Leslie Hanna at 9:48 PM