It's been a wild ride today. It all started when I woke up and thought I heard rain. Yep. It was raining. Eh, I can handle rain. I mean, it's not like last week where it was raining sideways, with 50 mph winds, then the lights went out and stayed out for a few days, right? Wrong.

I stepped into the living room and the rain started to really come down. Then we started again with the wind and the thunder and the lightening, so I logged on to weather.com and then the lights went out. Seriously.

Well, this wasn't like last time, right? The lights would come right back on, right? RIGHT?!?! Wrong. I waited until the lightning stopped and the thunder moved on, then called in to work to tell them I'd be a little late, and quickly took my shower (by candlelight). When I finally left for work, it was lovely out. Look at that sky: 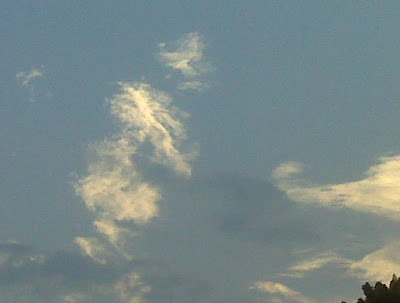 But don't look over there: 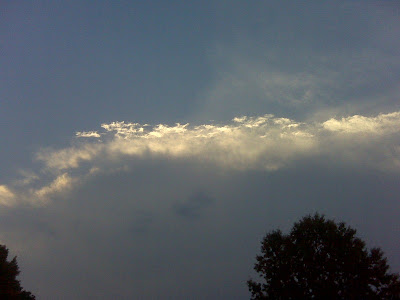 Ew. I was fortunate that I take the beltway to work, because a lot of streets had downed trees and flash floods. As I drove, I heard about two water rescues near a local creek, and there were rumors of a ... what did they call it ... not a wind sheer - those are what take out planes. Um, it was basically a wall of water that they said was really hail that had melted on its way down. It was ugly. I only had to deal with a few dead stop lights once I exited the beltway, and if people could remember that 4-way stop thing, it would have been totally uneventful for me.

I knew we were supposed to have more bad weather for the commute home (HOW did I get to be so lucky?), and not only did we get it, but we also got a tornado watch with it! For free! YAY! Ohboy!

Fast forward to about 5:45 pm, and I was driving into this: 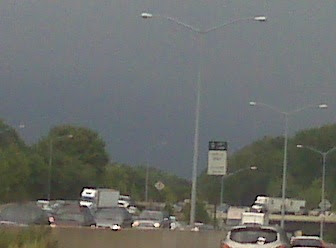 ... and yes, this is normal traffic. Actually, it was kindof light today. But that sky - ew. Serious lightning. I tried to capture it, but I failed to do so.

Then it started to rain. REALLY rain. Eventually I pulled over and just turned on my flashers. This was all I could see out my windshield: 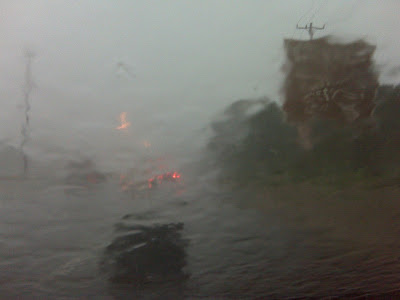 A whole lotta wet. (No, that's not a pirate ship like some of my Tweeps thought. It's one of those brown, historical road signs.)

I got home, and still no power. Bummer. I went to the fridge to save the remains of my very, very thinly-sliced corned beef, and as I rummaged for the beast, the lights came back on! Yay! Woo-hoo! Life was good, and I was back on track.

On track for what, you ask? Last night I had this idea. I've been making normal cards for way too long, and I felt the need for snark. I thought if I made up one design and just changed out the sentiments, I could crank out a whole bunch of cards at once. So I did. I settled on 12, and my goal was to use up some of the papers in the Heaplet. I selected a few papers, a few sentiments, stamped everything on white, die-cut all the parts-is-parts, and ended up with this pile: 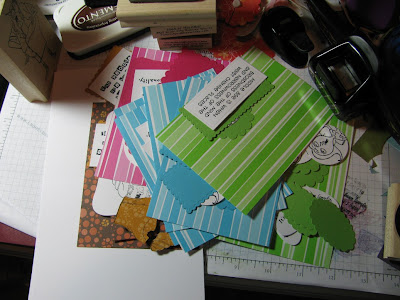 Some of you SU people will recognize these striped papers. What do you think: 2003? Well, they're gone now! I assembled as much of the cards as I could, and just left off the pieces that needed to be colored. Here's the stack of almost-complete cards (and a look at one of the sentiments): 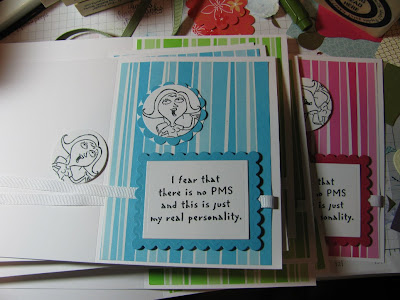 I colored one of the ladies and realized I could do that even if they were attached to the cards, so I attached them all and called it a night. When I went to bed last night, I had this set up and waiting for me for when I got home tonight: 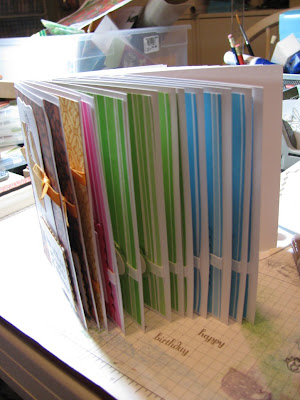 Just look at all those little soldiers! Of course, this photo was taken last night, because when I got home tonight, there was no power. But once it came back, I tackled the coloring. I'm proud to say I have finished them all, plus four more, because I could. Let's have a look!

First, we have Jane wearing the very popular Tempting Turquoise: 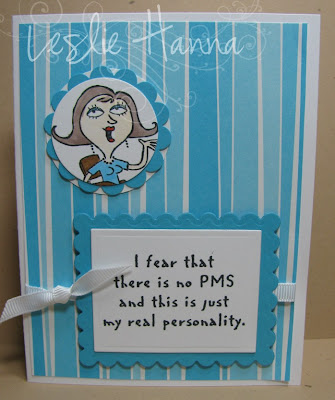 I think she speaks for a lot of us on some of our more "sensitive" days.

Next we have Margo, sporting some vibrant Green Galore: 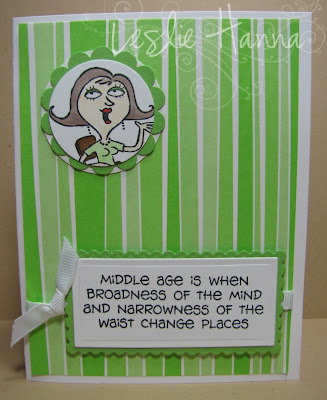 She is quoting one of my Tweeps who was shocked when she quoted someone who'd said this and I replied, "I have that stamp." I don't lie about these things. I am quite proud of my collection of irreverence.

Speaking of which, here is Carlotta, also sporting Green Galore, but with a different sentiment: 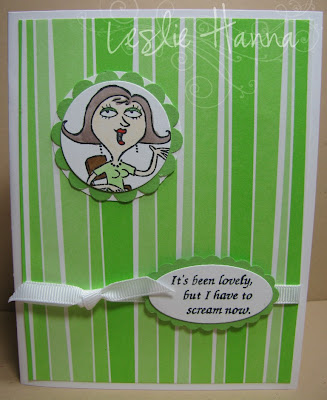 Now how many of you have felt like this? Hmmm? Maybe only a few hours ago? Like in the pouring rain? Like when that I D I O T was driving in torrential rain with no head lights? YEAH, THAT IDIOT!? Oh, wait, that was me screaming. (nevermind)

Next, we have Sharon wearing Pink Passion: 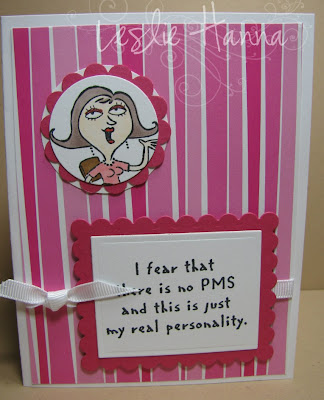 She has issues similar to Jane. In fact, they are very close friends.

Next up is Tammy, wearing a quite subdued Mustard: 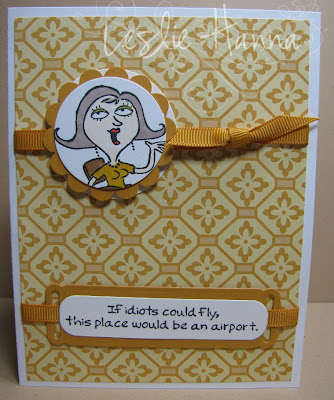 (Every time I say "mustard", I think of Col Mustard, in the Library, with the candle stick.) Tammy must work with me, because some days I think I am surrounded by idiots. No, not really. I like where I work. Okay, the drivers are all idiots.

Finally, we have Maude. I love Maude. She is a snarky old girl! She is also sporting some Mustard, with orange and brown accents: 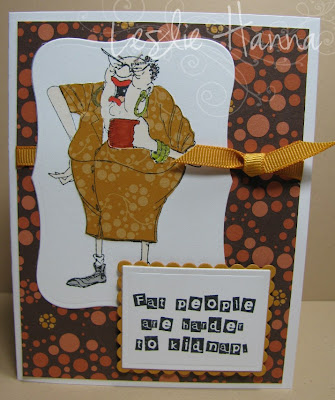 This is another sentiment that I had to tell my Tweeps "I have that stamp". Lookie: 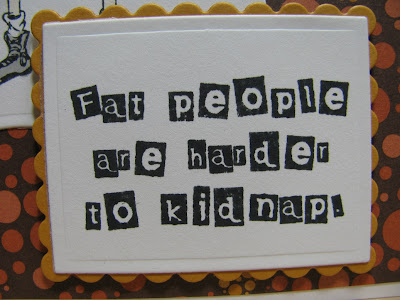 Then, because I could, I made four of these: 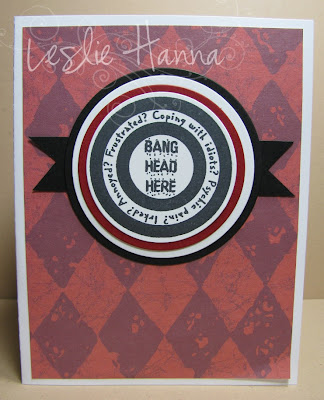 The most difficult part of this card was finding paper with red & black in it that wasn't so busy I lost the target image. When I finally blew the dust off of this one, I realized it was purple, not black, but it's so washed out, I think it works. The central image is one stamp, and I die-cut all the other circles to make it look like a target.

Then I called it a night. I think between this round of stamping and the last one, where I made multiples of all the Stamp Camp cards and used up the extra kits, I have enough new stuff for this weekend's market AND to stock my box of cards at Chloe's coffee shop. And I may even add a few to my Etsy store!

I also printed off 30 City Cards, but I have a feeling I'll be bagging and tagging all these other cards tomorrow night and I won't get all those City Cards stamped and colored until next week. Oh, well. At least I can tell people who ask (because they've been asking) that I will have some, they're just not finished.

So thanks for reading this far. Now that this place has cooled off from being without a/c all day, it's time to put these old bones to bed.

Thanks for stopping by!
Posted by Leslie Hanna at 9:38 PM