Hi! Remember me? Whoa, this week totally got away from me. All of a sudden it was Thursday and then it was FRIDAY and ... and ... I didn't stamp! Ack! But it's not like I've been sitting around doing nothing. Well, okay, maybe last night I did nothing. I tried to make up for it this afternoon during the 1/2 day I took off of work.

Next up: dusted & vacuumed. This happens rarely, but, well, you know that character in Peanuts - Pigpen? Mmm-hmmm. It was time.

THEN I assembled my second of two Plexiglas display racks and stowed it in the car for tomorrow's market. MORE floor space!

THEN I went into the Captain's Quarters to have a few words with my new cabinet. When I first measured (twice!) and put the screws in the wall, the resulting spacing was 1/8" too far apart. Carp. So today I re-measured (twice) and re-did the holes and the screws. I even double-checked them by making a template (paper with markings for the placement of the holes in the back of the cabinet) and checking the holes in the wall. Then ... I hung it up: 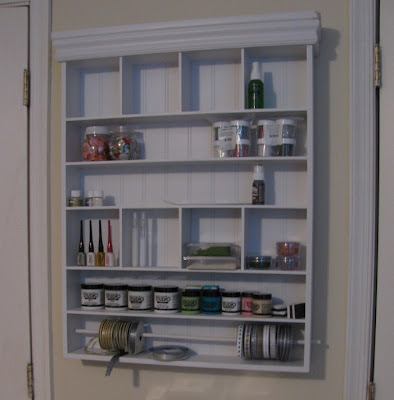 YES! Isn't it purty? I proceeded to grab all sorts of homeless crafting supplies and stowed them on these tiny shelves.

You can see my paints and sprays and Flower Soft and some other stuff. I wasn't going to use the dowels for ribbon, but I have some Martha ribbons (on the left) that were hidden in a box, so now they are out where I can see them. I also grabbed some other homeless ribbons and put them on the right. The shelf with my paints has holes for another dowel, but I'm not going to use it. Better as a plain shelf.

While going through all this drama, I re-discovered this set: 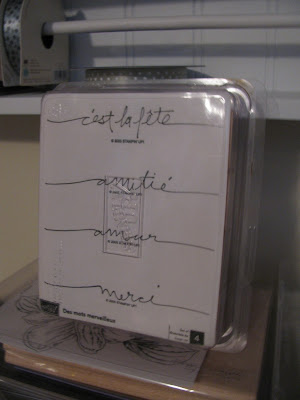 I got it many years ago when the SU Wonderful Words first came out, and I wanted it in French. (Why, you ask? That year we had a vendor at the market from ... some island and they spoke French, so I thought it would be cool to make cards in French.) This was when SU had just opened in Canada, the Quebec catalog was available in French, and none of the US stamps were offered in other languages yet. This was also before SU made it clear there would be no "across the border" sales. I'd already done a trade with a Canadian Demo before SU put the kibosh on that sort of thing.

Anyway, I actually have two of these, and I'll be selling this French one. If you'd like it, let me know. I'll add it to my Buy My Stuff list over there on the right.

Then I actually, finally, made another Sympathy card. This one is an oldie but a very popular one: 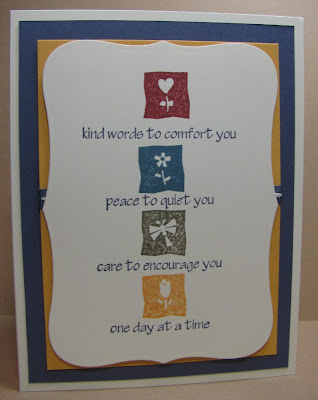 I make it a little different each time, but I always use these '07 SU In Colors. Heaven help me when I run out of them. The stamps are from Endless Creations, and I've had them for years.

This isn't a traditional Sympathy card, and many people have purchased it for non-traditional situations. Like a son who lost a fellow High School friend. Anyway, it's sold out, so I've made a few more.

Then it was time for something NEW. I opened one of my new Totally Stampalicious sets and made this: 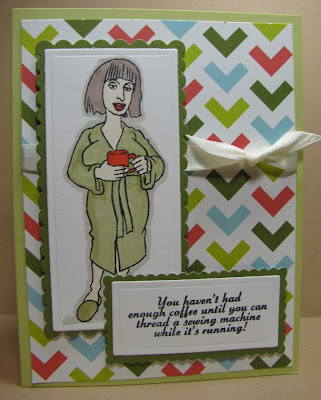 The piece of patterned paper was out, and I used it not only for the bottom layer, but the green die-cut shapes are from the other side. I made two of these. Wow, at this rate I'll use that piece of 12x12 paper in my lifetime. Yes, I still have some left.

For those of you who are visually challenged like I am, here's that sentiment, up close and personal: 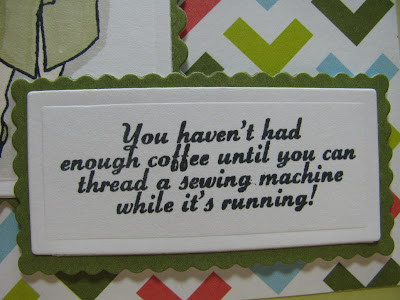 I don't know about you, but having been a sewer (that's sew-er, as in someone who sews, and not that other "sewer" thing) for many, many years in my youth (yoot - name that movie), I find this sentiment hysterical. Especially since NOW I can't even see the freakin' needle.

Moving on, I had some other new stamps in the house from Starving Artist, and I made this: 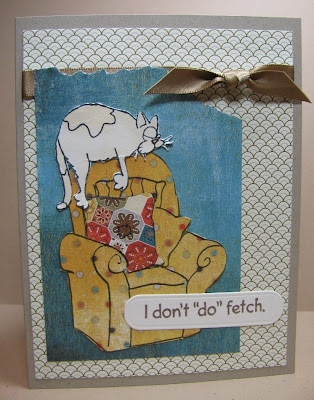 Let me just say it took me over an hour to get this far, and I'm still not in love with it. I'm not happy with how that sentiment looks anywhere on the card front. Say what? Inside?!? Put it inside?!?! Not in my world.

The chair and pillow were stamped on two pieces of paper from my now-opened Max & Whiskers Basic Grey 6x6 pack. (You do understand that this totally justifies its purchase, and enables me to buy more BG this weekend. Totally.)

The larger piece of patterned paper is SU, and was laying on my Heaplet, so I used it.

Doesn't the cat look like he's floating? Like I should have put him further down on the chair? Mmm-hmm. And all that tearing of the blue layer? I originally wanted to put the sentiment up there, and it looked good, but not right next to the cat's head, so I added the ribbon (!) and moved the sentiment down. Eh.

Tonight I need to bag & tag these and all the cards I made last Sunday so I can take them to the market with me tomorrow. It's supposed to be lov-er-ly weather-wise, and I'm looking forward to that!

In other news, the cocoon is still a cocoon. No butterfly or Mothra yet. I did put up a piece of cheesecloth, held in place by monster thumb tacks. If the winged one emerges when I'm at work, I hope the cheesecloth will contain him and I can use it like a net to take him outside later. We'll see how that goes.

That's all for now. Thanks for stopping by!
Posted by Leslie Hanna at 9:01 PM