I thought I'd start this post with a typical moment in kitty's world: 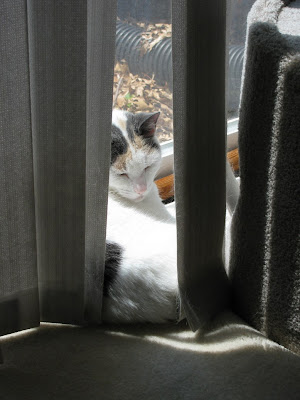 Asleep in her sun beam. And yes, the back sides of my vertical blinds are fuzzy. What, yours aren't?!

You know how you know stuff, but you conveniently forget to apply it to yourself? Yeah, well I'm there. I think I've mentioned before that my kids went to a Montessori school when they lived in Maryland, and the staff made sure the parents knew what was going on so we could extend the concepts into our home life.

One of the things we learned was that a child can have "too much". A child is capable of making choices, but if there are too many options, they get overwhelmed and choose nothing, then act out their frustrations. The example used was toys at home. It's okay to have a bazillion toys, but not all out at once. If a child has a room strewn with toys and he says he's bored and has nothing to do, he's not bored - he's overwhelmed. Have a shelf with, say, six toys. The child can play with any of those six toys. Then every few weeks, swap out one toy with one you've been "hiding", and it's fresh and new, and there's still only six toys out.

Fast forward to my stamping world. I think it's been determined that a lot of stampers have a mild form of ADD (oh, look - shiny!) and are easily distracted by new things. I, myself, have so many ideas in my head, they fight to get out. Then I see something new and I must have it, because I can picture all the things I can make with it. Then the new SU catalog comes out and I buy everything in it to, well, you know: be a Good Demo.

I get all excited and I start with one thing, get half-way through, get stuck, set the project aside and start with the next new thing ... repeat. I end up with a pile of incomplete projects (aka: The UFO Pile), and a big mess. After a while my work table looks like this: Yes, I am taking one for the team once again. Actually, that is an amazing amount of free work space. Really! Okay, let's do the numbers: 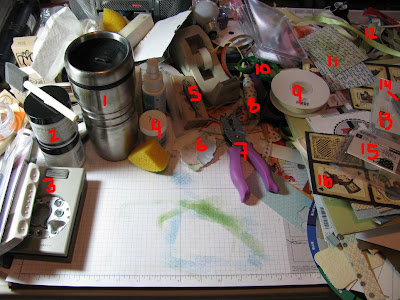 1. Coffee. I forgot about it and it got cold.
2. My gel medium containers from my not-yet-successful attempt to make cool clouds. (See #6)
3. My owl punch. It tried to eat my hand, so I gave it a time-out, but I'm not done with it, so I can't put it away yet.
4. Embossing powder and sponge (no, NOT used together) I just used to make one of the cards I'll share in a moment.
5. Fish stamp from my last batch of Cod cards, which are selling quite well, by the way.
6. Clouds. Still not attached to anything, but they are stacked nicely, non?
7. Hole punch. Used to ... make a hole. I'll talk about it again in a sec. It has since been moved to my "potential workshop projects" staging area on the Dining Room table.
8. Ribbon from my stash. I bought it many years ago, thinking it would go with everything, when, in fact, it goes with nothing. (I used to have a pair of shoes like that, too.) I take out the ribbon, try it, hate it, and will eventually put it back in its box.
9. Very Vanilla grosgrain ribbon (LOVE) that I have out for ... I don't remember, but I've since put it away.
10. Deckle-edged scissors. (See # 16.)
11. Two failed attempts at one of the cards I'll be sharing. The failed parts are now toast (in the trash).
12. My "OMG, I simply cannot throw this piece of ribbon away. I just KNOW I can use it for SOMETHING." pile of scrap ribbons.
13. A stamp set I pulled out of its shipping box so I'd use it. Haven't touched it. Still unmounted.
14. You can barely see the edge of a new SU Sizzix die. I have since moved it to the Big Shot neighborhood. It is NOT put away, because I haven't used it yet.
15. A stamp I actually mounted and used in one of today's cards.
16. A really, really cool piece of card stock - so cool, in fact, that I bought about 5 of them. It's Halloween paper from Graphic 45 (LOVE THEM!) with an Alice in Wonderland theme. AND, the back is Jabberwocky! EEEK! Perfection! I know, I don't do Halloween, but I thought I could use some of the images for other things, so I've cut them out with Deckle-edged scissors. And here they sit.

So what part of "overwhelmed" is not clear, here? Why did I just figure out that's my problem? Everything I touch I say "eh?", set it aside, and move on. Too bad next weekend is my Stamp Camp weekend, and I only have two projects made. No pressure. LOTS of time.

I went scouting for potential cards to CASE for my classes, which resulted in some of that mess you just saw. This card led me to futz and eventually make this: 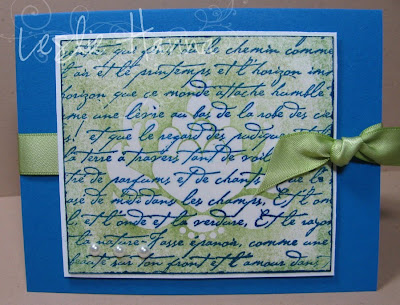 Hers was all blue, but I wanted to do something to make mine different, so I used greens to sponge over the embossed image. I'm not so sure it was a good choice. I also did not use the jumbo eyelet like she did to feed the ribbon through, not because I don't have any (I hoarded them, you see), but because true-to-form, I already have another project planned that uses the Crop-O-Dile, and I didn't want to have to deal with changing the settings 30 times, so I just used a hole punch instead. It's covered up anyway. It'll be fiiiiiine!

I also didn't tie a bow. Not that I didn't try, because I did - about 12 times. Then I remembered some of The Ladies detest bows, so I just tied a knot instead. 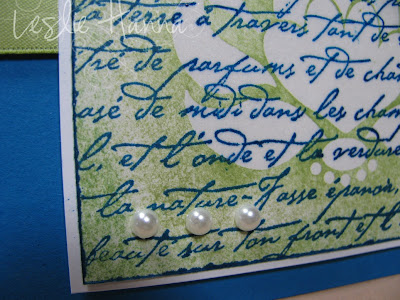 You can actually see there's three half-pearls there. I think they were more obvious on her card. I may go back and change it up to blues. Dunno yet.

Because the card base is dark, I cut out a Top Note shape for the inside: 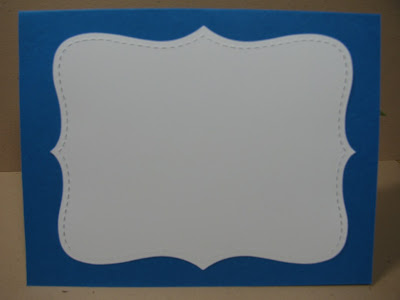 Of course, I already have another project planned that uses the Big Shot, so I'll pre-cut these for The Ladies and put them in their kits.

Then I moved on. I took this new (to me) stamp and decided I wanted to separate the sentiment from the image, so I did: 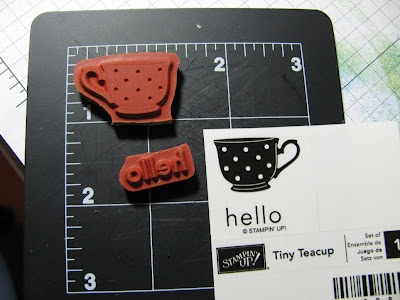 I used my Craft knife to cut the sentiment off, then I mounted it to the side of the wooden block. I figured I'd use them separately more than I'd use them together, so this would make life a lot easier.

Then I tried to CASE this card, but I ended up doing it a little differently: 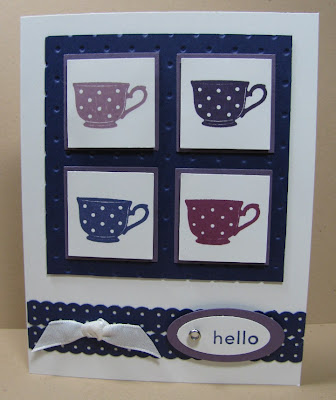 What I changed:
- I used Perfect Plum squares under the tea cups instead of Rich Razzleberry
- I used Concord Crush instead of Eggplant for the dark purple
- I embossed the purple square with the Perfect Polka Dots folder and turned it upside down so the de-bossed side is up.
- I used the new Dotted Scallop Ribbon Border punch, and I punched two of them.
- I tied a simple knot instead of wrapping ribbon around the whole card.

First of all - me and purple? This is not normal. But since I have yet to use one piece of the new Concord Crush card stock, or even to unwrap the ink, I forced myself to do it. This is also why I used the Concord instead of Eggplant for the layers.

I'm not so sure it was a good choice, so I'll stare at it this week to see if I want to include it as a project or not for the weekend. Oh, drat! I already have a project that uses the oval punch. Sigh. Guess I still need to work on projects for next weekend.

Maybe if I put away a few more things, I'll get some forward momentum again. Perhaps I'll play with the Jabberwocky/Alice stuff. You know, I never had to memorize Jabberwocky in school. Nope. I had to memorize plenty of other things, just not that one. I'm kindof sad about that, as it's a cool poem!

’Twas brillig, and the slithy toves
Did gyre and gimble in the wabe;
All mimsy were the borogoves,
And the mome raths outgrabe.
On that note, I think I'll go do some laundry so I can go to work tomorrow, then do a little work space straightening. Maybe I'll be inspired along the way!