Today I'd planned to make all four projects for this coming weekend's Stamp Camps. I got half-way there. Not bad, not bad.

I wanted to do something with the Elizabeth stamp, but not with embossing like I did here. Nope. Something a little easier. I saw someone cover the oval in the stamp with an image from the Oval All set, so that's what I did here: 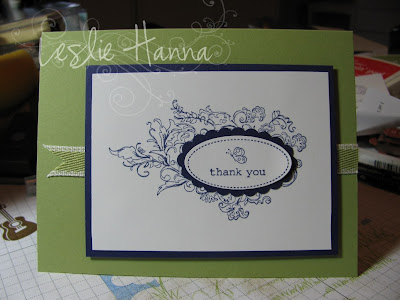 This is the nekkid version - before coloring. The Ladies will have the option to color it or not. I finally (FINALLY) used Concord Crush, which I've paired here with Pear Pizzazz (heh heh, pun not intended). And I FINALLY opened my In Color ribbons. My gosh, but that twill is scrumptious. 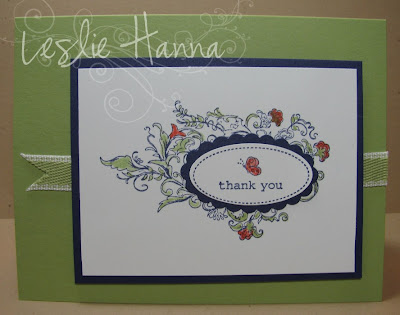 I used a blender pen with Pear Pizzazz and Poppy Parade to color some of the leaves and flowers. I like doing only some of them because (1) it gives the idea of color without having to be perfect, and (2) if I miss a leaf I can say "I meant to do that".

This next one was sorta CASEd from this card. I have white-space issues, so I added layers of color: 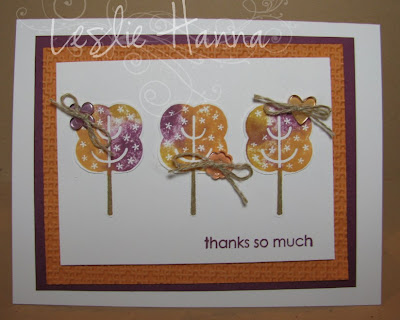 No, it's NOT crooked. Well, not as crooked as it looks. I embossed the Peach layer crooked in the folder, so the whole thing just looks crooked. I used the Baby Wipe technique to stamp the trees, then I cut them out. If The Ladies think they can get them stamped evenly, they can skip the cutting step. I tried it and I failed, more than once. I am such a hard-a$$, aren't I? :)

And to any of my customer reading this blog post: never fear! You will not have to thread the Linen Thread into those teeny tiny buttons. It's all done with mini glue dots. You can tie the bows and stick them on with a rolled-up glue dot. Easy peasy.

Then, to celebrate being half-way done, I tried making something I've had in my head for a while: 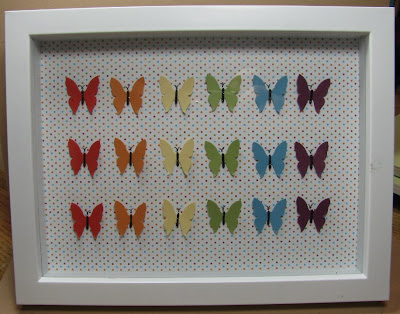 It's 6x8, and the butterfly punch is an MS punch. I colored the bodies with my Memento marker, stuck them down with rolled-up mini glue dots, and then drew on the antennae when I was done. Then I went back over all the bodies with black Stickles to give it some shine.

I want to try it again with textured card stock, which I'll order this month. I think it will add a bit more texture. I decided against adding three mini black pearls or rhinestones to each body and went with the Stickles instead. Ugh, but that bling sounds like work.

This is a shadow box frame, so there is space between the butterfly wings and the glass (or faux glass - not sure). I could probably pull this off without the shadow box - just a plain white frame, but I like how the wings can be 3D in this frame.

So that's all I've managed today. Oh, I've started three or four other projects ... they just never made it to completion. Some days we just struggle so, until we hit on something that works. I'll get there. Heck, it's only Monday! LOTS of time! :)

Thanks for stopping by!
Posted by Leslie Hanna at 6:40 PM