I promised you a post about okra, and here it is. I also promised myself I'd try to be nice about it. I'm trying.

But first, to stall just a bit more, I wanted to show you my first batch of completed bookmarks: 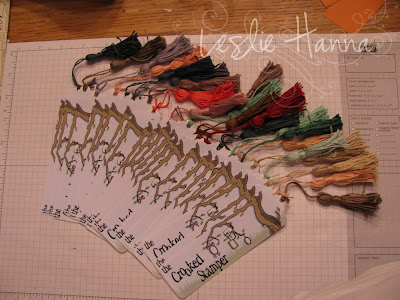 Aren't they purdy? I'm sending this batch (and maybe some more, if I get to them) to the organizer of the Falling for Handmade craft show in which I'll be participating on Oct 16th. I'll drop more not-so-subtle hints about that later. Tonight it's ALL about the (gag) okra.

Here is some cultivated okra in its just-picked state: 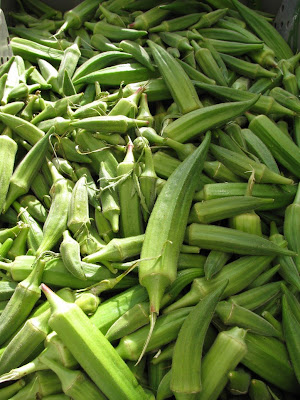 Some small. Some large. You know they were just picked because they are still fuzzy: 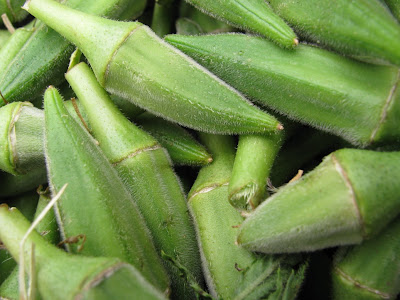 Since not all of these sold before the end of Saturday's market, I bought some. NOT A LOT, just these: 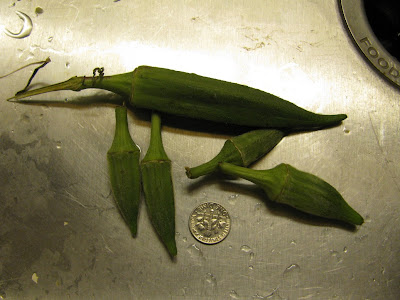 The dime is for perspective (gots to have perspective). That's four baby ones and one Big Bertha for comparison. Here's what I did to prepare them:

Verdict: I do not like okra. I will agree that when fried it is at least not slimy, but it still tastes like okra, and there is no reason on this earth that I should ever HAVE to eat it ever again, so I choose not to.

In other news, tonight I am making the cards from the left-over class kits (I had a few cancellations). It is so nice to have not only a sample card to follow, but all of the card stock pre-cut. I know, I repeat myself, but it's true! I think I need to find another Demo and take her classes just to have that luxury once in a while. :)

I've done 6 of one card so far, which leaves me with 18 to go (3 cards x 6 kits). I hope to get them done by Friday so I have something new to bring to the Market with me on Saturday.

I also got a shipment of 4 (FOUR) new sets of Nestabilities which will need to see some lovin'. I hope to find some time to use at least one of them before Saturday.

That's it! Thanks for stopping by!
Posted by Leslie Hanna at 8:37 PM