This week's Jingle Belles Rock challenge is to use stickers. Stickers - I haz 'em. Having cleared enough space the other night by finishing a bunch of unfinished projects, I went back in to make my Jingle Belles card. 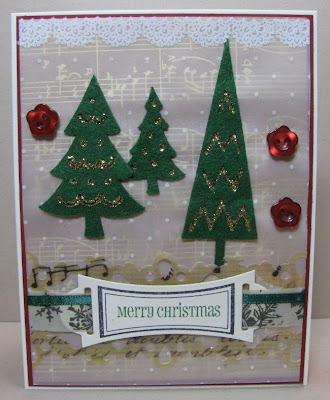 It's a mess. Vellum and I are not friends, and I have no idea why I chose to use it on this card, but there you have it. It started with those green felt stickers. I had some of the embossed music paper still out (of course), but it was so SHINY, the trees didn't work. Oh, now I remember about the vellum: it was to tone down the SHINY and still let the music show through.

I stuck the trees to the vellum, then put glue on the back of the vellum behind the trees and stuck it to the music paper. I thought I was being so smart. We'll come back to that in a moment.

Here's the bottom part of the card, whose details follow: 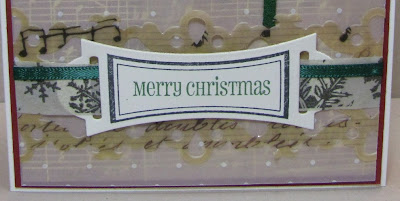 I pulled out a package of plastic stickers from the stash and used part of one as the bottom horizontal layer. It had music on it - had to be done.

Then I added a piece of Tim Holtz tape (which, in my world, is a sticker) across the middle of the plastic sticker. I have music tape, too, but I thought that might be overdoing it a bit, so I used snowflakes instead.

Then I broke out my new Taylored Expressions Layers of Love II stamp set that coordinates with the Nestabilities Ribbon Tag Trio 3 dies, stamped and cut the tag, but realized any ribbon I'd use would cover up one of my sticker elements. What to do ... what to do. I unstuck the tape and put it through the die-cut tag instead of ribbon, then stuck it back down. I could do this because it's such a good sticker. :)

Then I got a hair-brained idea that the trees were boring, so I filled all the openings with gold Stickles and set it aside to dry overnight.

The next day ... I had warped vellum. Have I mentioned that vellum is not my friend? Sigh. So in an attempt to secure the wavy vellum, I added some MORE stuff to the card to disguise the glue dots I put under the vellum to try hold it down. Now I have three red buttons on the card and the vellum is still wavy. ;(

I layered the whole thing onto a piece of (I think) Cherry Cobbler remnant to make it look like I meant to put those red buttons there. THEN the bottom of the card was boring with no color, so I added some skinny green ribbon so you could still see the tape (sticker).

As my final effort for bonus points, I added a rub-on across the top, which we all know is really a fancy sticker, am I right?!

This card weighs 12 pounds. It could also be sub-titled: not knowing when to stop. But it does have stickers, so I'm calling it my JBR entry for this week. I'm also calling this a one-of-a-kind, as I have no plans to revisit any of this ever again.

I'm off to link this up to the Jingle Belles blog, then I plan to move on. Only two more weeks to go, which means two more holiday cards to make this year! How many holiday cards have YOU made so far? Hmmm? I have a squillion!!! :) Feels soooo good.

Thanks for stopping by!
Posted by Leslie Hanna at 8:59 PM