My first craft show of the season is this coming Saturday, with set-up Friday night, and no - I am not ready. I'm never ready. Well, technically I am ready since I have a car full of cards from the markets, and my box of 100+ holiday cards is sitting on my Dining Room table, but it just never seems to be enough. Later this week I'm sure I'll resign myself to the "if I'm not ready by now, I never will be" thinking and get over it. Until then, I shall panic.

So in this state of mind I ventured into The Captain's Quarters with the intent of making some cards for the upcoming show, when my brain was suddenly distracted by something discussed on Twitter several days ago. One of my tweeps asked about the napkin-as-paper technique (aka: Felted Cardstock), and I decided today that I needed to do that. Like right now. I have no idea how my brain works, and it's probably better that it remain a mystery.

I pulled out two napkins from my stash ... Hey, while we're on that subject, I think napkins should be sold singly to crafters. I do. Why in heaven's name do I want 25 napkins that will make a squillion cards?!? I only want one or two, please.

So I took the napkins, and using some paper recycled from my work printouts, I ironed the napkins to card stock. Important tip: Do not put any printed material facing your card stock. My paper has a printed line on one side of it, and since I wasn't paying attention, I got this: 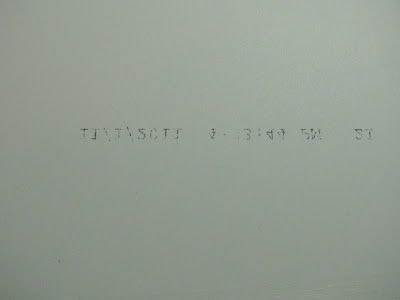 which is okay if you plan to stick that side to something else, but I just thought I'd share.

Okay, so here's the first card I made: 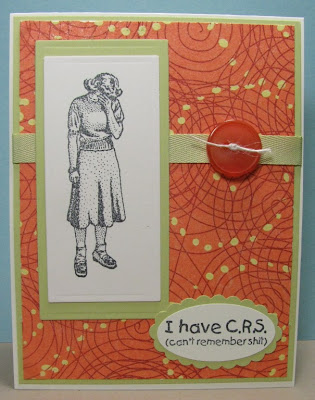 The orange part is (was) a napkin. I decided that the dots in it were PTI Spring Moss so I used that for my layers. I also used two of the ladies sitting on my table from before, not yet assembled onto cards (I made two of this design).

Oh, the craftalanches (plural). My first craftalanche of the week in The Captain's Quarters happened in the craft closet. It seems I've used enough of several of my Basic Grey 6x6 pads that they are no longer stacked flat, and a few of them leaped (lept, leapt, jumped) to their intended demise and landed in a scattered heap on the floor of my closet. I stood there looking at them, decided they were unharmed, and there they sat while I finished whatever I was doing. I did eventually pick them up, but the point is, they tumbled. I might have to re-think how I store them. Tomorrow.

The second craftalanche happened when I reached for a bottle of buttons, knocked another one off the shelf, it hit two spools of neatly arranged baker's twine, and all fell to the floor. Sigh. I watched the whole thing happen slow-motion-like, then put it all back. Never a dull moment around here.

Moving on to my next napkin, I had a bit of trouble trimming it, and it kept doing this: 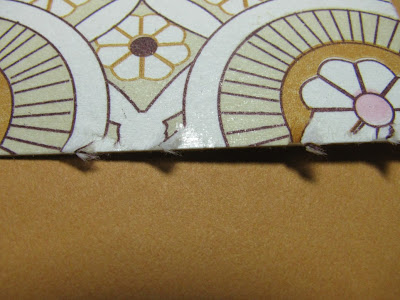 See the torn edge? Yeah, probably a combination of not heating it long enough AND I need a new blade on my paper trimmer. To keep me from trashing the whole thing, I opted to die-cut it into shapes instead and made two cards. Here's the first one: 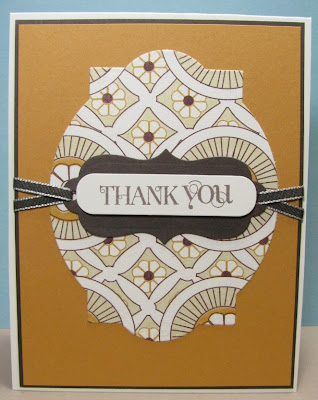 I layered it onto More Mustard and used Early Espresso for the bottom layer and tag. This could work as a Thank You for Thanksgiving, so that's pretty timely for this upcoming show.

Here's the other die-cut: 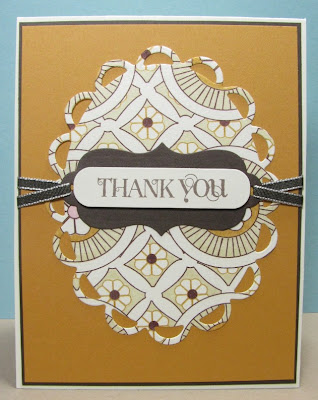 Purty, huh? I have a few more pieces of both of these napkins, so I'll go make a few more cards, then maybe focus on something. Hey, it could happen.

Thanks for stopping by!
Posted by Leslie Hanna at 12:14 PM