People ask me where I get the weird sentiments I put on some of my cards. Well, believe it or not, most of them are stamps that I've purchased. I must just hang out at different stamp stores than everyone else does. Actually, the scary thing is that someone else thought them up; I just bought them.

Another source for a lot of my irreverent sentiments comes from the Interwebz, and mostly from Twitter. People say the darnedest things, and repeat things they over-hear. I get LOTS of ideas from Twitter. Some of them not suitable for this blog, but I will admit the cards sporting them sold this past weekend. :)

So the other day, one of my peeps and I were talking about something and we were both so riled up, at one point she said, "That brings out the inner trucker in me." I laughed so hard I had to write it down.

Tonight I bring you my inner trucker card: 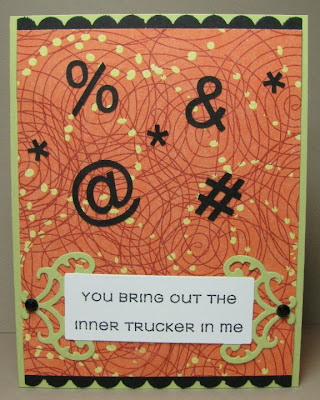 I used the last piece of orange napkin "paper" I made several weeks ago, so that's off my desk finally. (bonus!) I cut the special characters on my new toy! I caved and got a Silhouette Cameo, and I'm learning I have much to learn about using it. Still, these came out poifectly!

In other news, I've printed off 17 more sketch challenges to add to the 17 I didn't do last week. BUT, this week ends in a 4-day weekend for me, so I might actually make something. Could happen.

Thanks for stopping by!
Posted by Leslie Hanna at 8:44 PM