Saturday, while rummaging for something in one of my overflow boxes, I re-discovered a package of 12 pre-scored card bases: 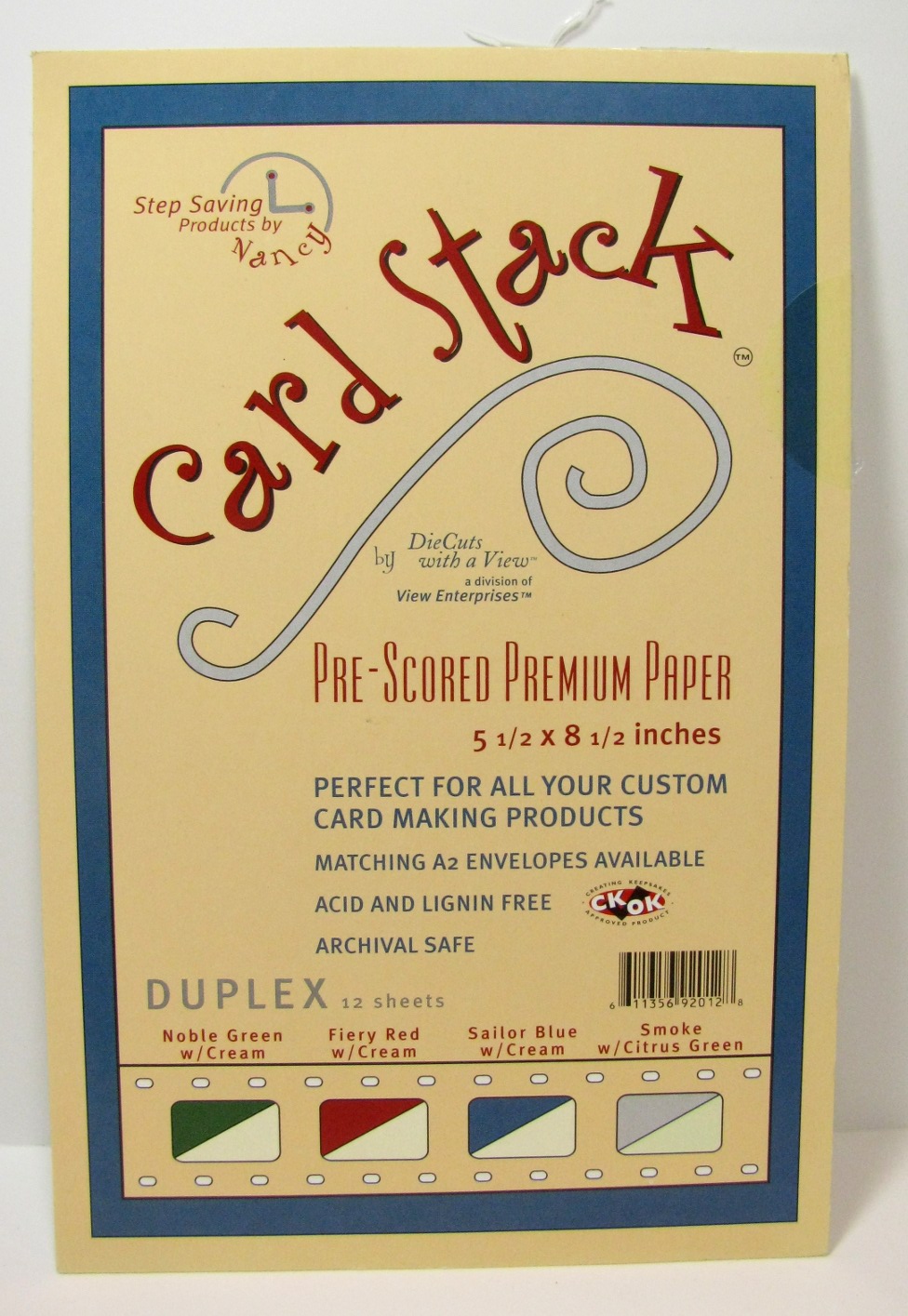 The colors of the card bases are actually quite rich colors, which you'll see here in a moment.  I decided to use washi tape on all of them, with a plan to add a round shape with a sentiment later.

From previous experience, I knew if I wanted the tapes to have good color and be visible, I needed to put them onto white card stock. I did some math: 12 cards x 3 strips each = 36 pieces of white card stock I needed to cut. Ugh. I did disappear a bunch of white scraps, though. :) 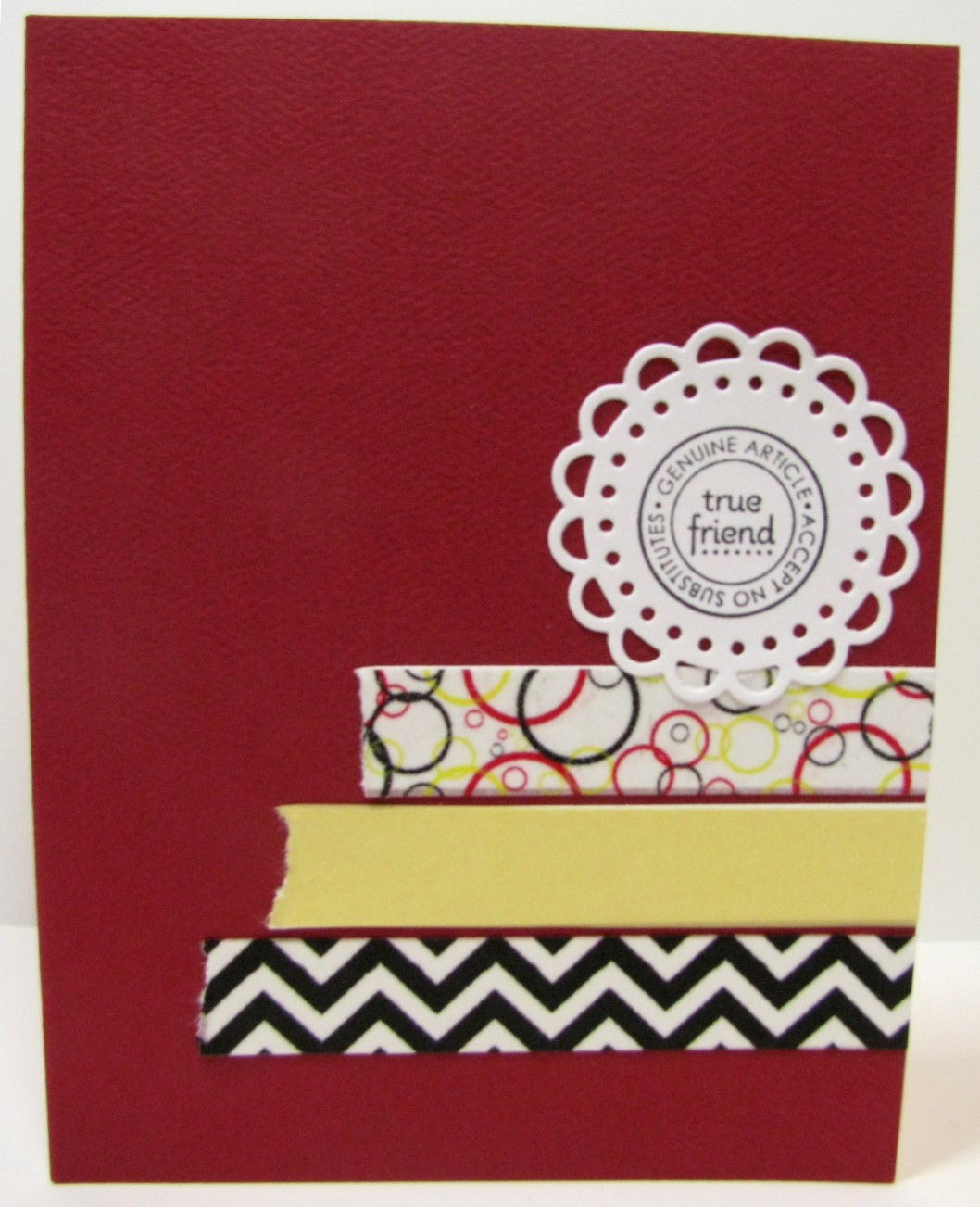 I stuck all the tapes onto the white strips, then applied them to the card bases. I used the same tapes on both red and gray bases. Here's a gray one: 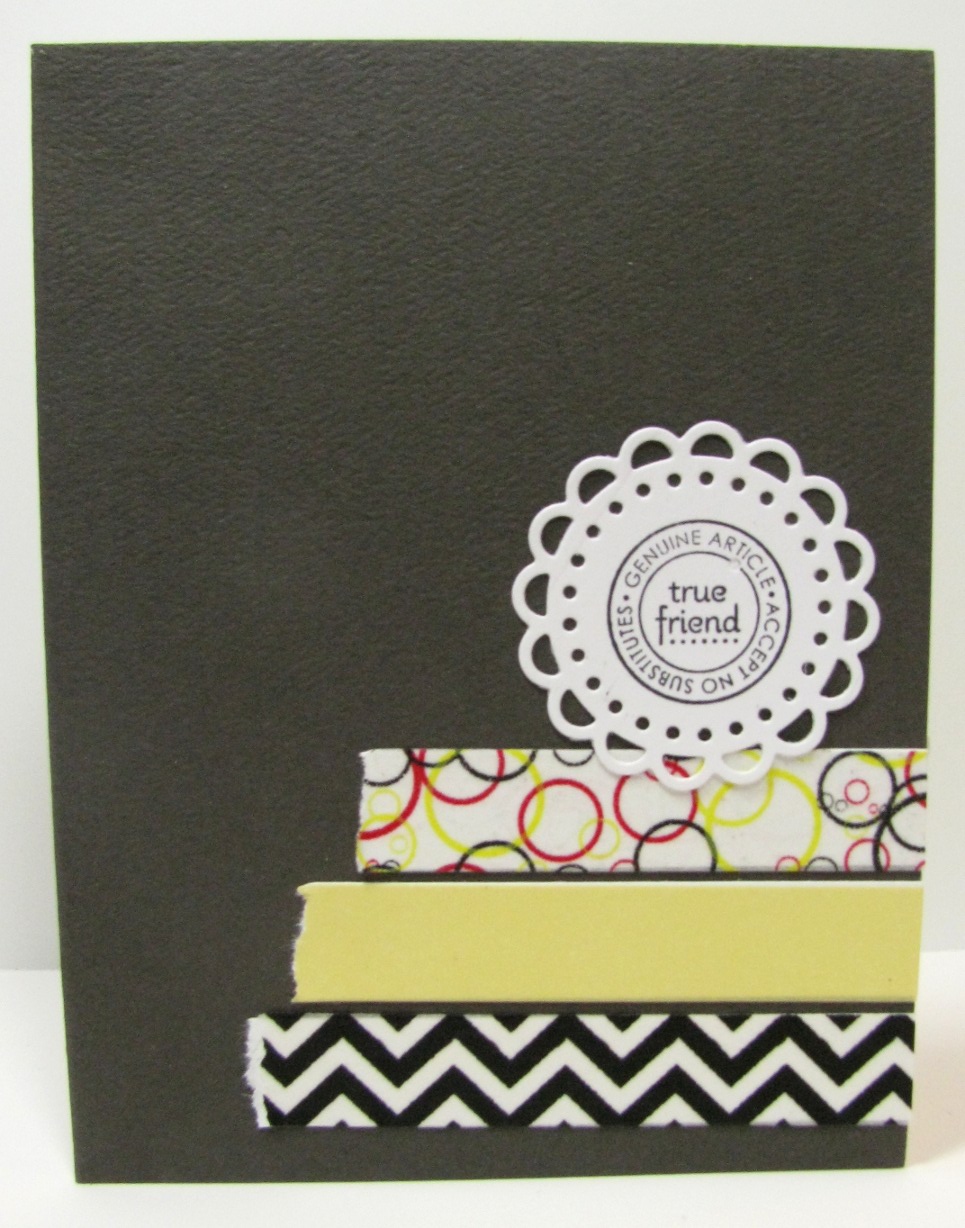 I used three different tapes for the blue bases: 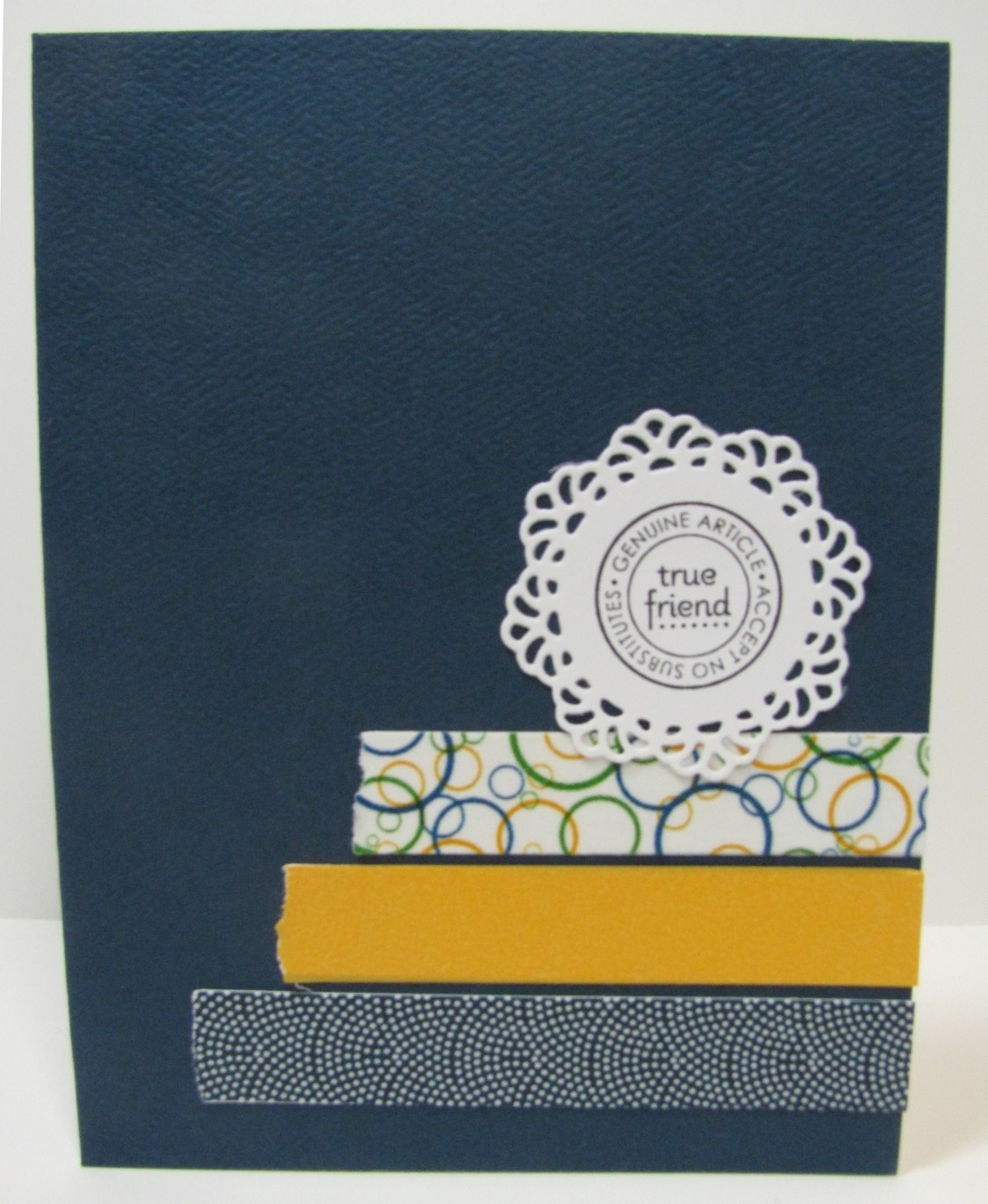 and also for the green bases: Can you believe that's the only dark blue patterned tape I have? Sigh.

There is a lot of open space here, so I made two attempts to fix that, then I had to save myself from myself and undo it all without destroying the card fronts, or at least in a way it could be covered up. I started out with Liquid Pearls, thinking I could "make" varied sized pearls. Not.  Here is save #1: 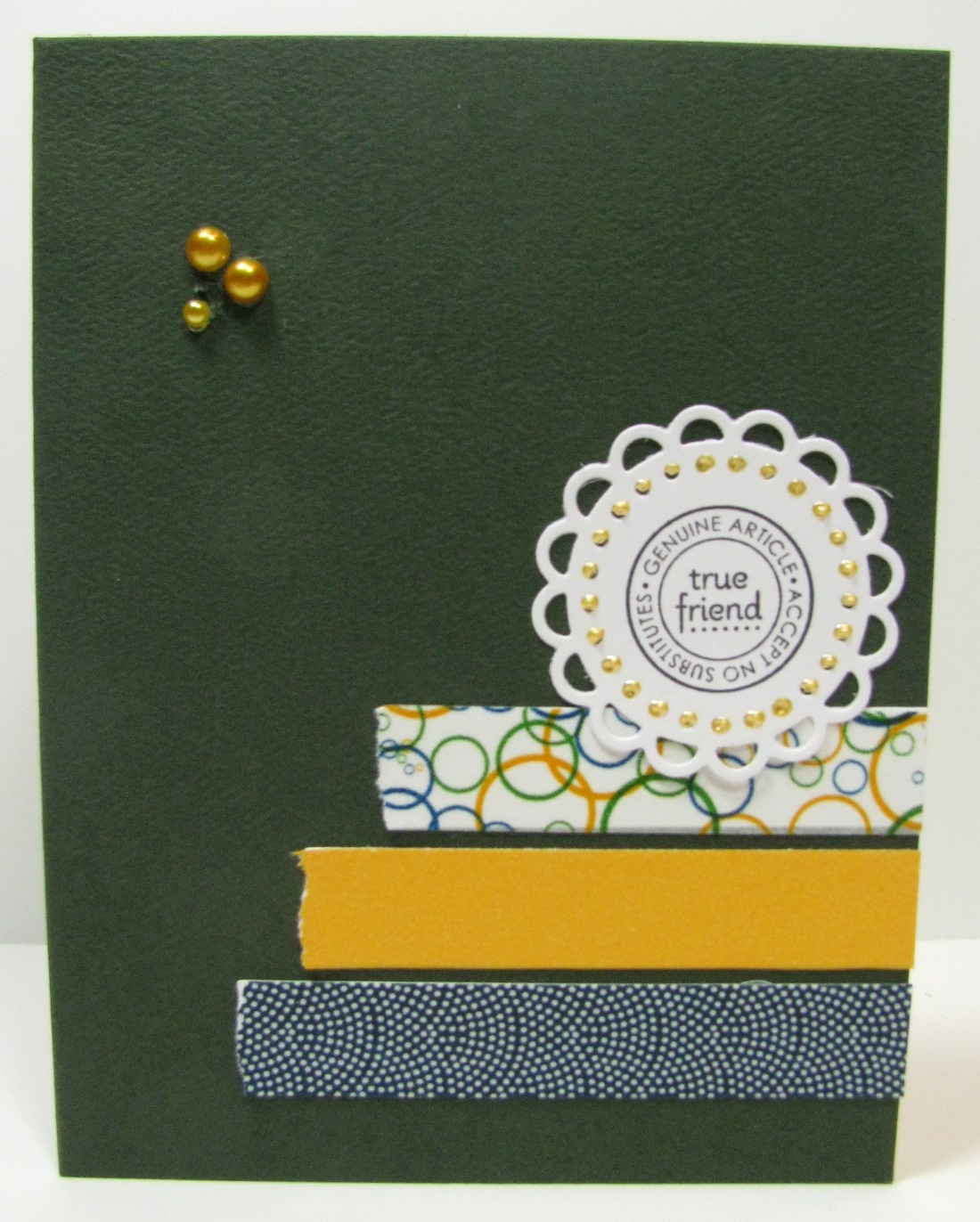 I had to leave the Liquid Pearls in the die-cut, but I scraped them off of the top left and covered the spot up with some Doodlebug pearls. It still looks odd to me, but maybe that's just me. 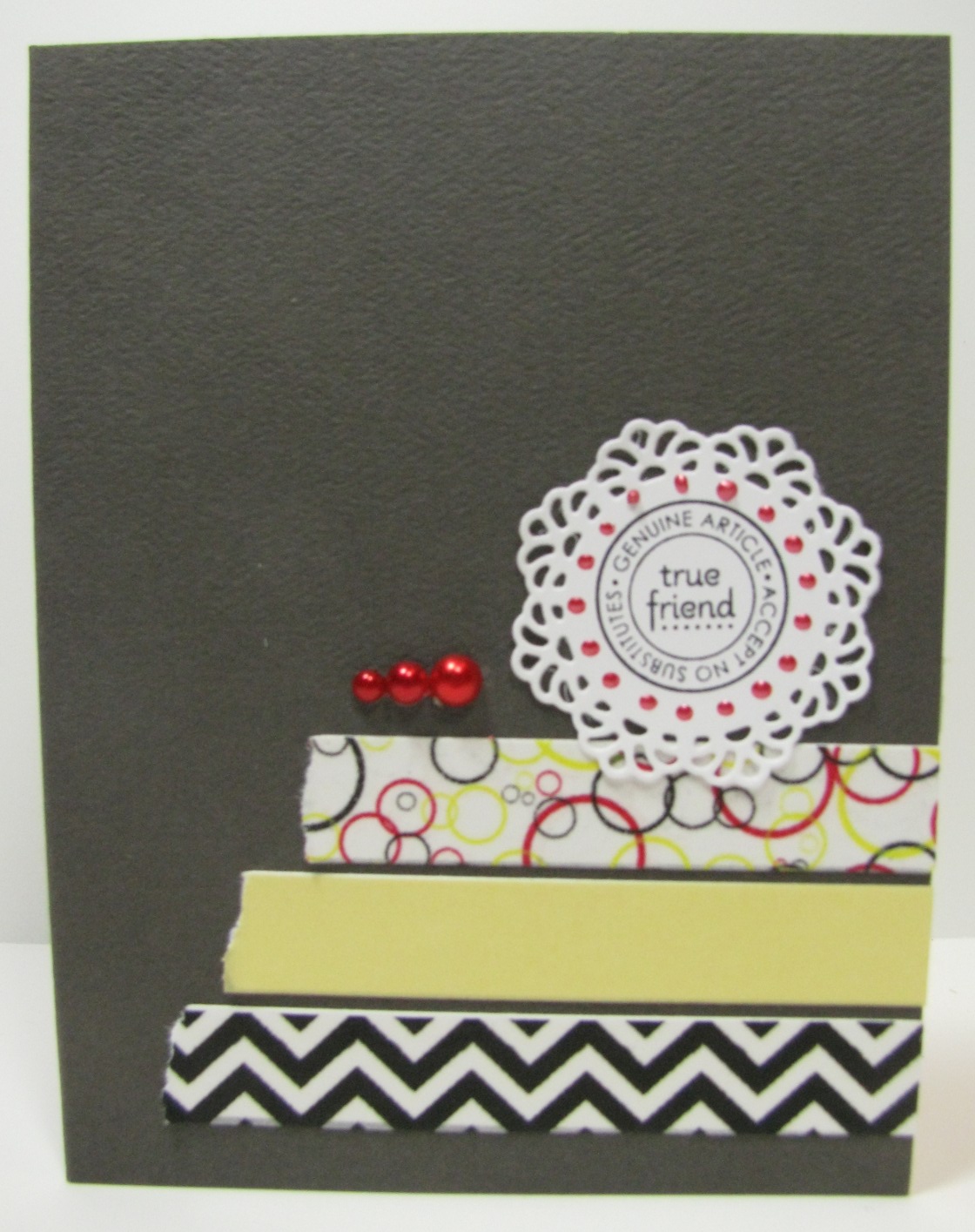 Again with the dots on the die-cut piece, but this time I added dots to the left of the mini doily. They were also removed and replaced with pearls. Both of these were fairly traumatic for me, so I opted to leave the other 10 untouched.

In other news, Sandy is headed our way, and will hit either tonight or tomorrow. I'm far enough inland (North West of the DC beltway, and hour inland from Annapolis, two hours inland from the Atlantic) that we won't get slammed, but they do predict lots of rain and wind. I have pitchers of water and a vat of key lime cheesecake-like bars, so I'm all set if we lose power and water. Oh, I have wine, too. And Tequila. I'm good.

Products used but not linked below: SU Punch Bunch stamp set, KaiserCraft Basics pearls, ancient DCWV card bases, and some washi tapes. I'm also not certain about that orange one I included below - mine may be more gold. THIS is why you should label your tapes when you take them out of their packaging.