One of the things I like to do to justify my various crafty purchases is to force myself to use the stuff before I put it away. I recently added a few Spellbinder's full-card dies to an order, and I spent a bit of time playing with one of them. Eventually this happened:


This is the Spellbinder's Cascading Dots die. Well, part of it. It comes with this center part which cuts the holes, but it doesn't cut around the outside edge (ask me how I know). There's a separate frame die part that does that. After I finally watched a video, I understood, but I was still challenged.

You see, the outer die is A2 size, and for me to get it to work, I needed to cut my card stock bigger than A2, so I was wasting a lot of card stock. After too many tries, I finally decided to cut the card stock smaller than A2 so it nested inside the inner piece. I also got it to work by manually trimming down the piece after I removed the circles die.

Speaking of which, you really do need to use a piece of wax paper between the die and your card stock to get the card stock to easily release from the die. I still had to poke all the holes out of the die in order to use it again. If I find I use this often enough, I'll invest in the Spellbinder's roller thingy that you just roll over the die and it pops all those pesky holes out for you.

So, once I had a white panel that I liked, I was stumped with how to use it. I'd  planned to put it over a piece of shiny card stock, and I still might. I think I set that one aside while I wrestled with the die and Mr Big Shot. The card above uses a piece of paper from my UFO pile. That piece of card stock was colored with Distress inks (Evergreen Bough, Peacock Feathers, and maybe Seedless Preserves). I then applied translucent embossing paste over it using a Hero Art stencil, so there's a shiny stenciled pattern over all the color. It's been in my UFO pile for a while.

You can see some of the shiny background here: 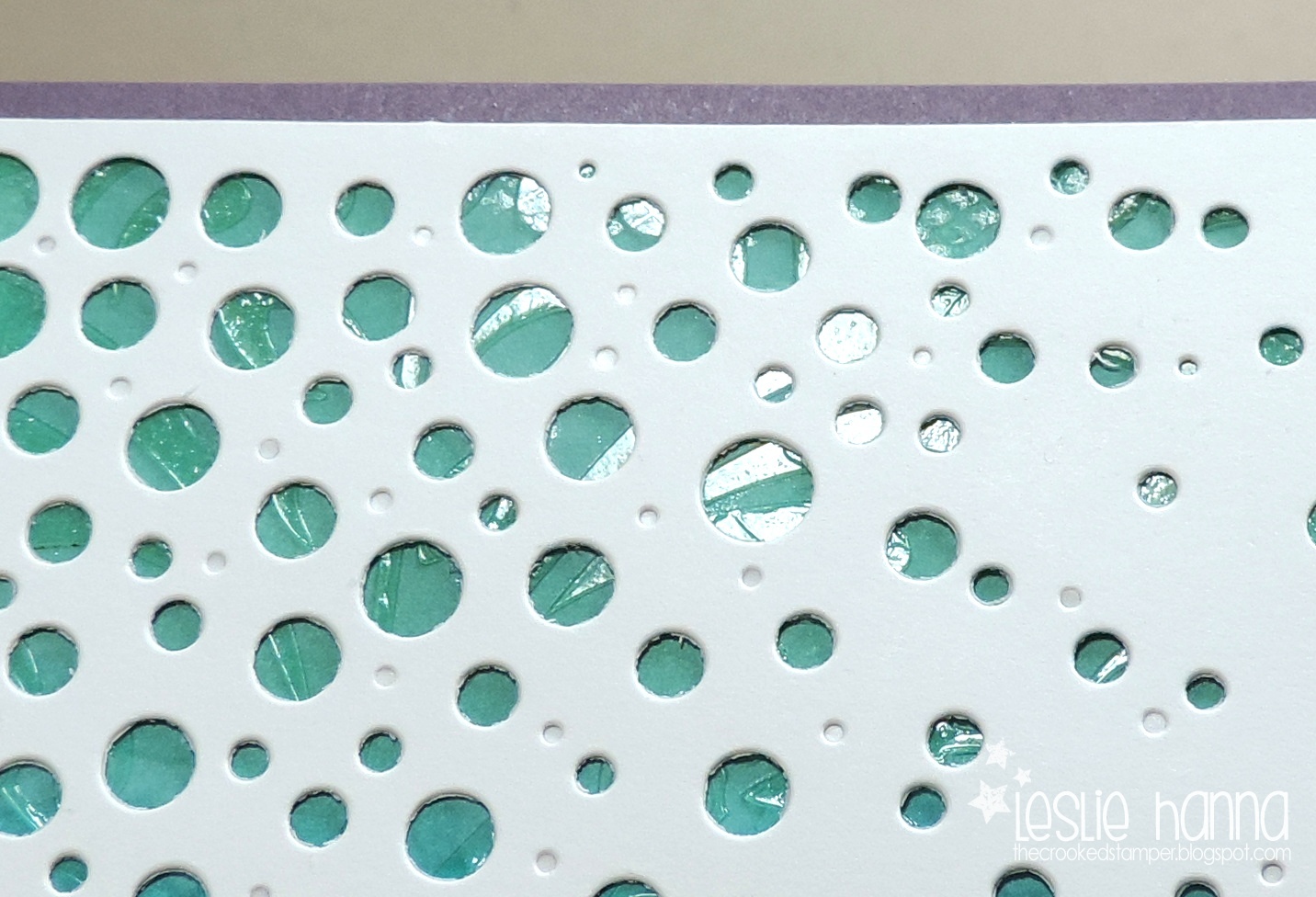 I mostly liked the three colors peeking out through the holes. :) I mounted the piece onto a purple Hero Arts card because I was pretty sure I'd use a green for the sentiment. I ended up distressing a remnant of white card stock with Evergreen Bough, and I die-cut the MFT hello from that, plus one out of black. I layered those babies and stuck them to the card front.

This card has no stamping, and for that I feel guilty. For the shiny under-layer version I may go finish now, I might use a banner with a stamped sentiment. We'll see.