The current Jingle Belles challenge theme is The Great Outdoors, and I had an idea. It happens once in a while.

After much futzing, here's what came out: 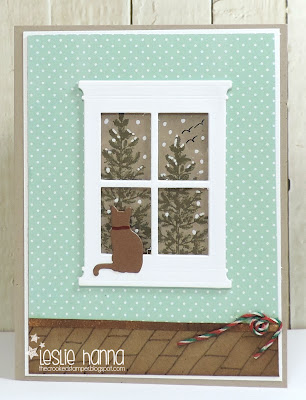 I know, I know, the theme is OUTdoors, and this is obviously INdoors, but hear me out. I love looking at snow from the warmth of my couch. I don't actually mind snow, or even driving in it*, but I think the best part of Winter is snow falling OUTdoors when you are INdoors.

So, let's start with the OUTdoor part: the snowy trees. I stamped my SU Lovely As A Tree tree in an Olive ink onto a piece of Kraft card stock. I knew I wanted to put a window over them, so I masked off around the window (actually, a little bit inside of it), then stamped the trees.

Next up: the INdoors. My room needed a floor and some wall decor, so I first made a faux wood floor. I used a pencil and ruler to draw the diagonal lines, then went over them with a brown marker, and drew in some horizontal lines to make it look like wood planks. I didn't bother with a wood grain. I just went over the wood with Antique Linen, then again around the edges with Gathered Twigs.

For the wall I used a piece of paper from a pile of unfinished card parts, cut a hole in the center a bit smaller than the window, stuck it down atop the faux wood floor, then added one of the windows. It fit.

The snow was made using a glaze gel pen. I even remembered to do it before I put on the acetate layer!

I glued on a few more windows, then a piece of acetate cut from some old packaging, and topped it with the final window.

Trim. The floor needed a piece of trim, so I colored a trip of card stock with Gathered Twigs, trimmed it (I crack myself up), and glued it down. I managed to schmear some brown onto the green paper, so I thought I'd add a cat toy to cover it up. In hindsight, I could have added some car hair along the floor, thus adding a bit of realism to the piece, and getting it off of my floor, but nooooo, I didn't do that.

Instead, I took a piece of the thickest twine I could find (#FAIL), rolled it up a bit, and glued it over the smudge. It took almost as long to wrestle that piece of twine into submission as it did to make the rest of the card. I might exaggerate. Maybe.

Because of the wood floor, I added a layer of white before mounting the thing to a Kraft card base. I used a piece of Neenah Solar White Linen because it's a bit lighter than regular Neenah Solar, but this card still weights about 4.7 pounds.

For my final act, I glued the kitty's butt to the window and put a glue dot under his head so he sticks to the acetate. The end.

I will only ever make one of these cards, and I hope The Belles won't disqualify me since it's an INdoor card looking OUTdoors. That's also an indoor cat looking out, for what it's worth.

* I grew up in SW Ohio, and I've also lived in MI and the Chicago suburbs, so I don't mind snow. In fact, I love it! I don't even mind driving in the stuff. Well, except for the 28 years I lived in the DC area. Those people are scary.

Stuff I used: SU Crumb Cake/Kraft card stock (they're mixed up in my collection, so I'm never sure which one I get), SU Lovely As A Tree stamp set, mystery green patterned paper, and the following: