In my world, it's all about baby steps. I've lived here just over a year, now, and I find I only unpack a box when I'm looking for something. Well, yesterday I was looking for my S-hooks because I wanted to finally hang up some of my IKEA Bygel storage (photos in a sec), and they were nowhere to be found.

I started in the craft room annex, also known as the third bedroom. I unpacked three large moving boxes of "stuff", some of which is now trash, some will make it to the craft room closet, some will be given away (I think I have every color curling ribbon ever made), and some landed here: 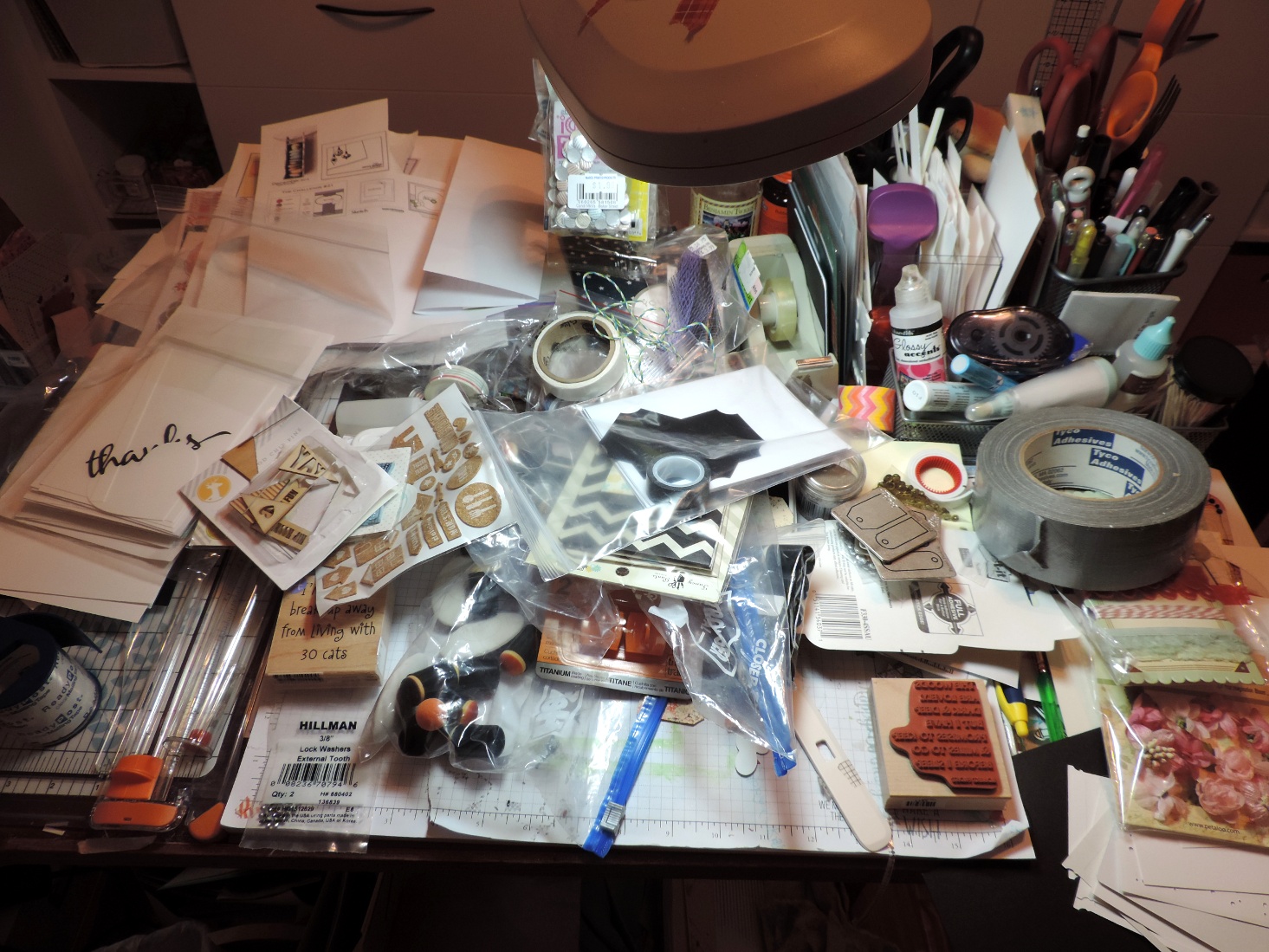 It's time to play What's On Your Workdesk Wednesday!

Yep, this is my desk right now. It holds things I've found in various boxes and bags, and also some new things like the pretty flowers and ribbon on the right that were a gift, and a stamp I haven't used yet (that miraculously didn't get covered up).  All that stuff is either from a box I unpacked in the annex, or from a bag I cleared out from the corner behind my desk (pic in a sec), or from kits I received last year that I have no idea what to do with since I don't scrapbook. They all eventually need homes, but for now they are here. I can't make another card until I address this ... stuff.

In all fairness, I have a huge empty space in the annex that used to hold the three packing boxes. I also have this: 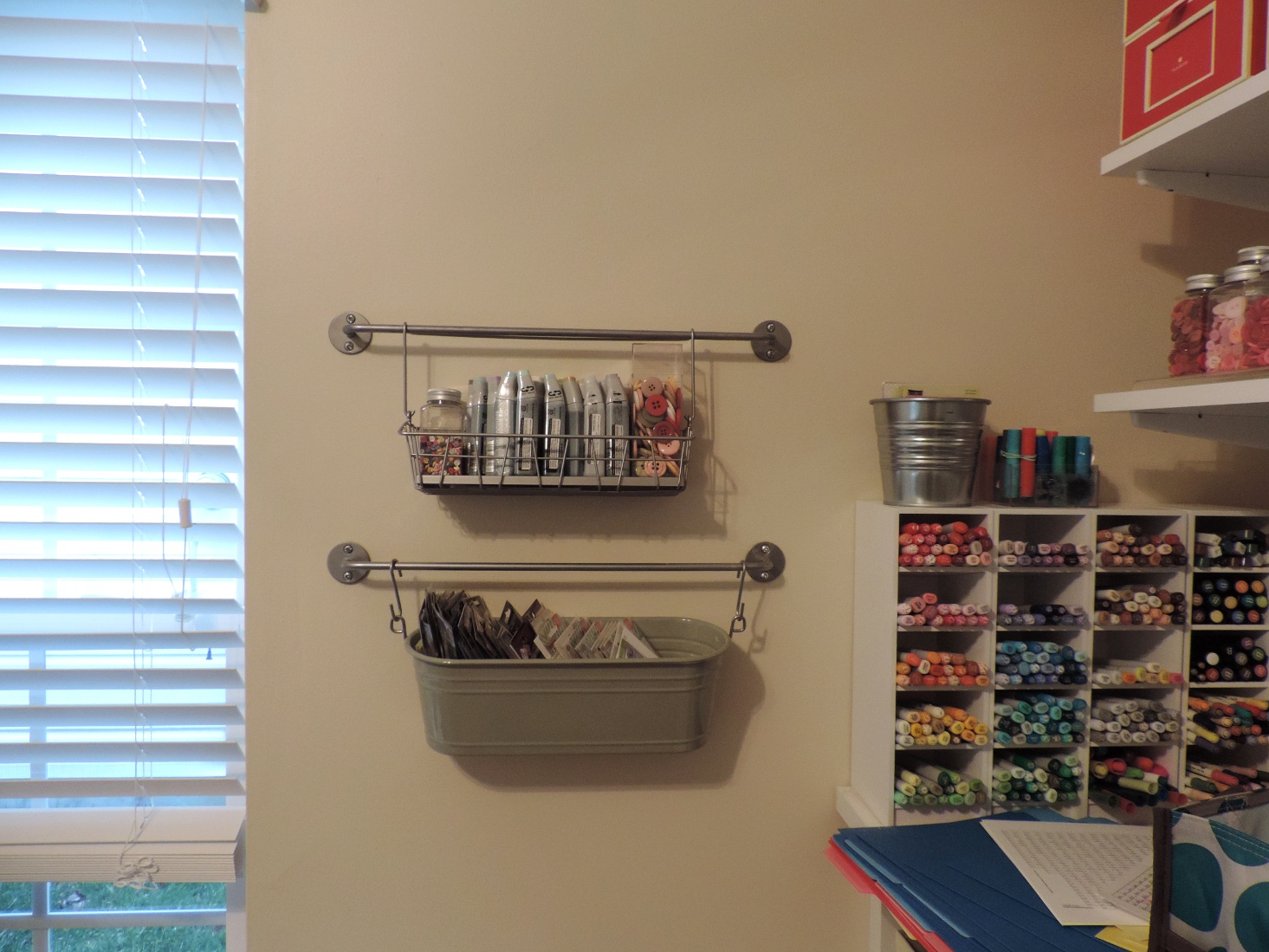 I finally hung up two of my IKEA Bygel rails (you can find them in the kitchen section). See my Copics on the right? My refills used to sit on top of the cubbies, but I got a few more and ran out of space, so I grabbed the basket you see on the top rail, put all the refills in the center, and put in some button storage boxes to hold them in place. This freed up the top of my cubbies for a tin bucket of miscellaneous bling, and my box of Gelatos.

Here's the top basket up close and personal: 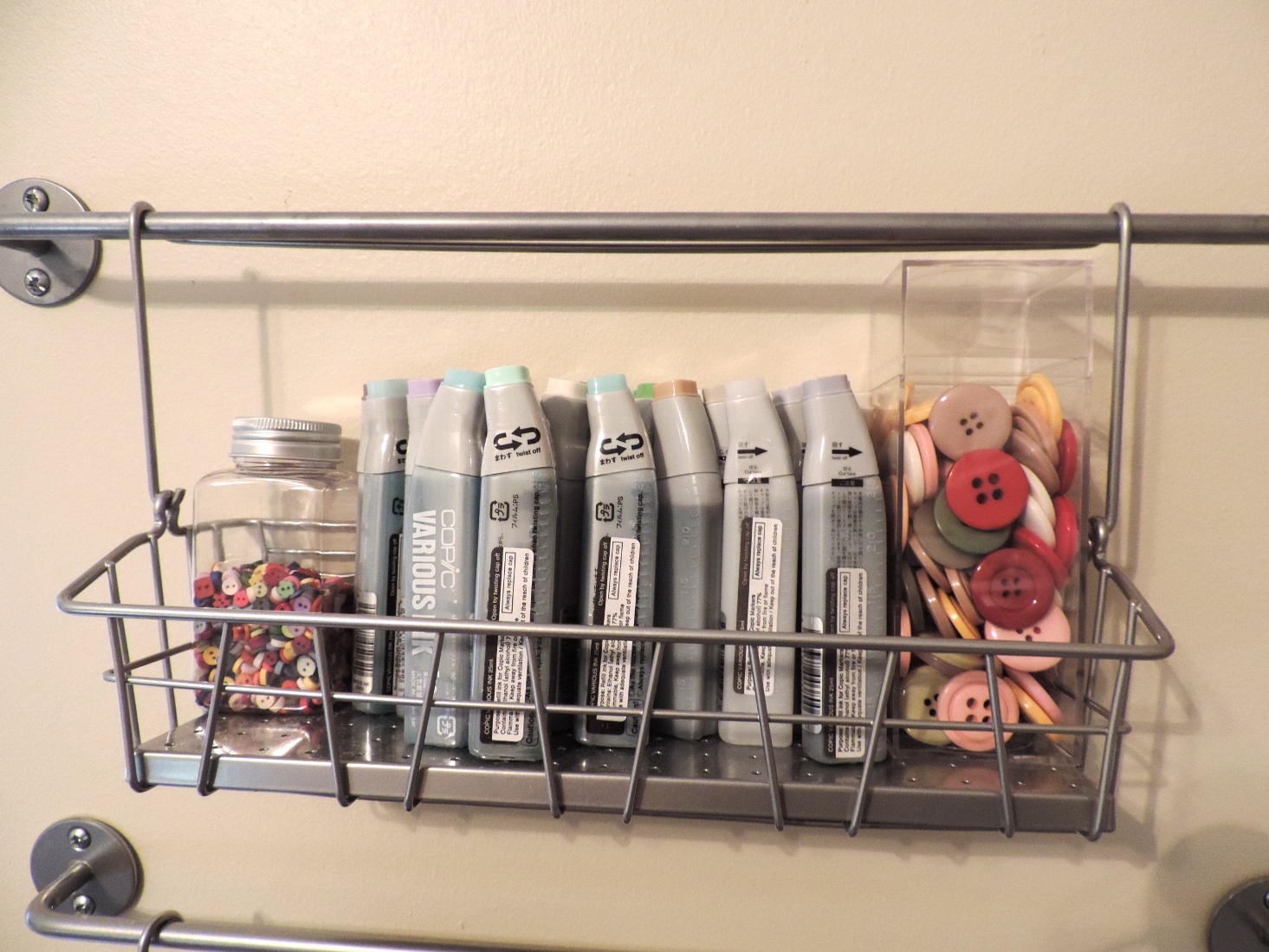 The bottom basket holds all my bling: 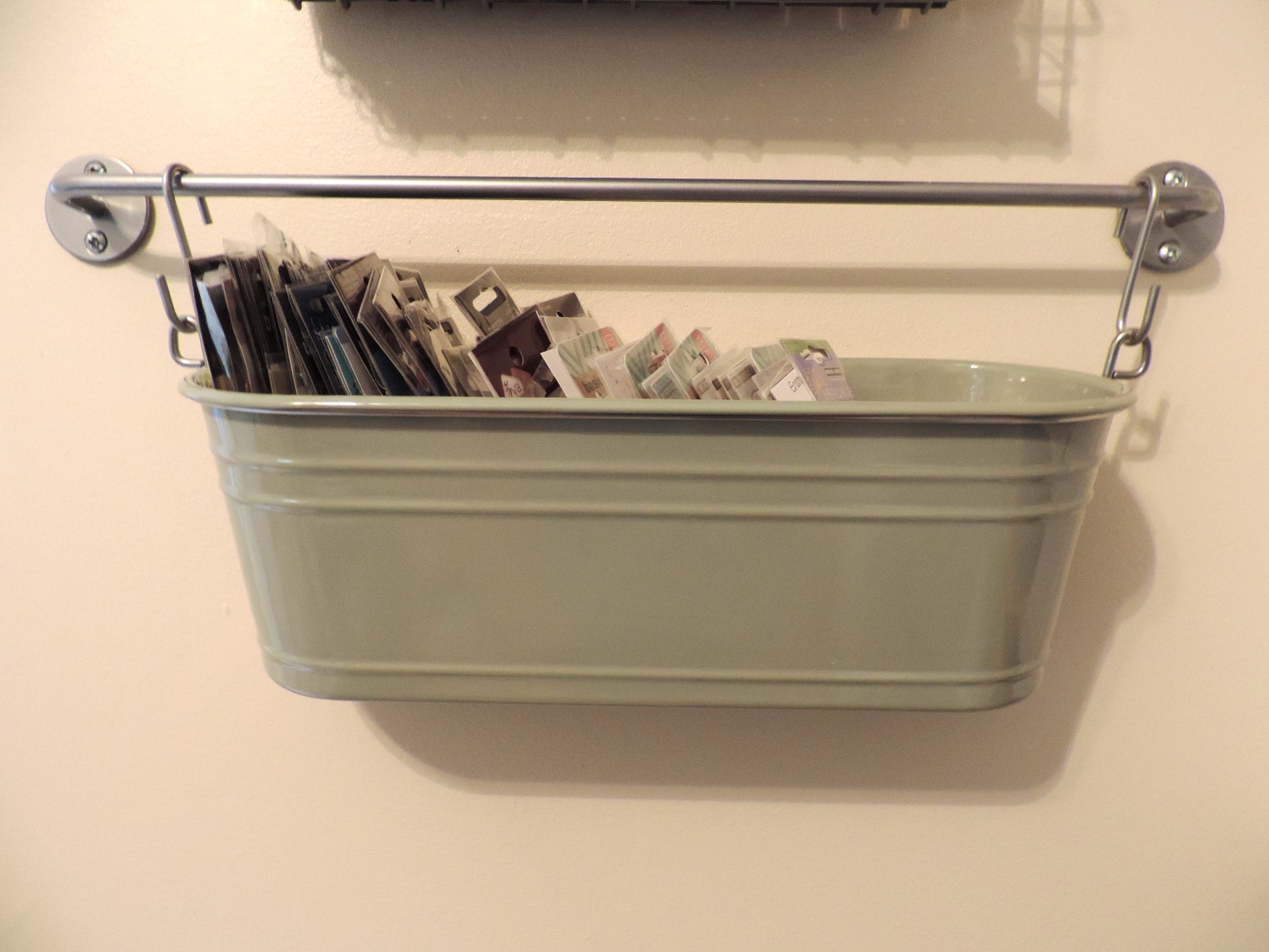 In a rare moment, I bought this container because it was pretty, without a thought to what I'd use it for. I had three small baskets of bling, one each for rhinestones, pearls, and enamel dots. Now they all live happily together in here.

This is also the basket for which I needed the S-hooks. Sadly, after I'd emptied the three huge moving boxes, I still hadn't found the hooks.

Then I moved on to the craft room to look for the hooks. One of the things on my list of self-assigned tasks was clearing out the s-crap that was piled up in boxes and bags that filled the space behind where I stand at my desk, and continued all the way to the open closet doors, and behind the doors. I could barely move in there, and I couldn't get to the closet for all the s-crap piled in the way. Some of the stuff now on my desk was in that heap, and now that space looks like this: 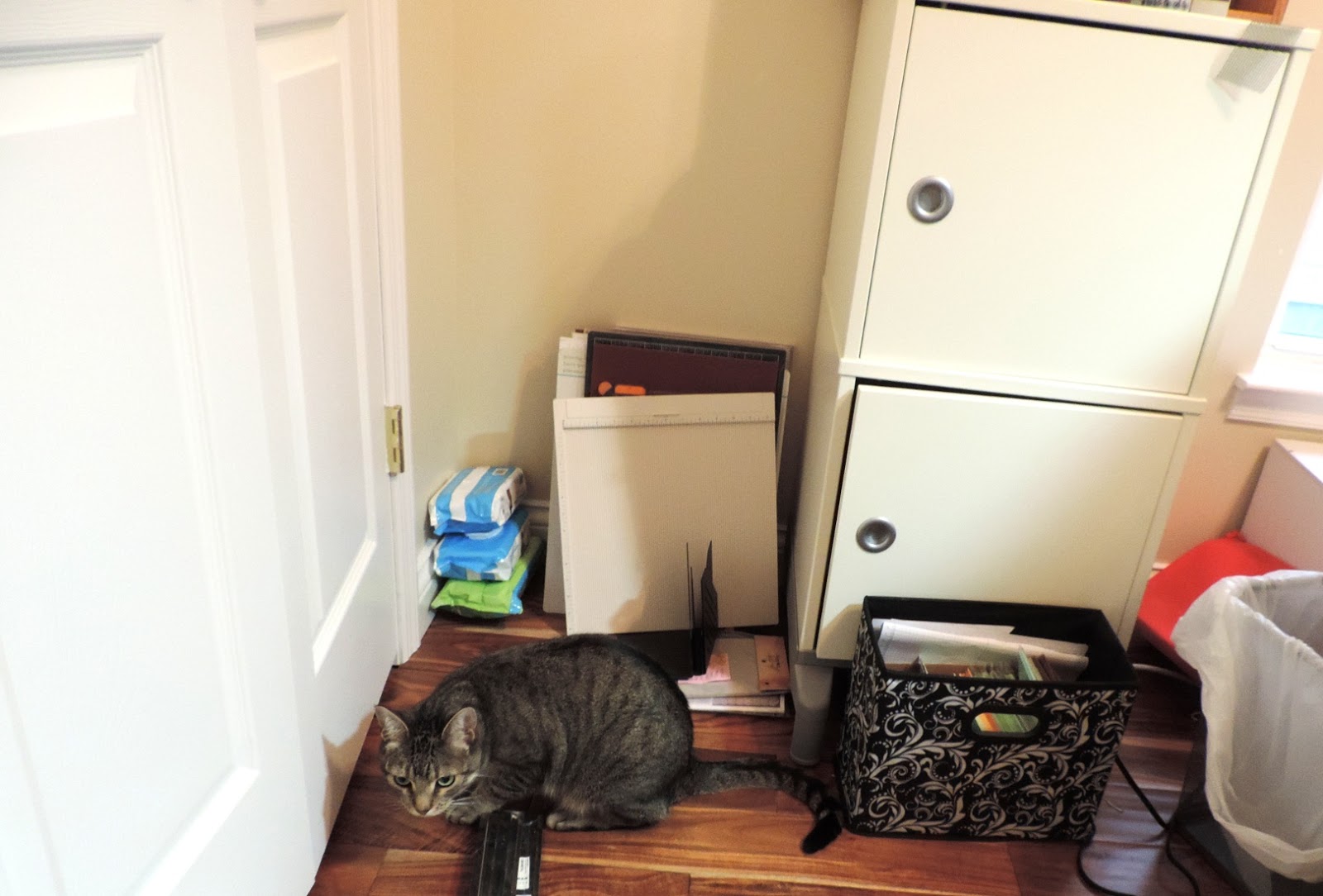 I see floor! And the doors actually close! Wheeee!  Standing next to the cabinet are a few SU grid pads I re-discovered, a few stamping pads, and my large MS score board. Also my cache of wet wipes and a few book ends that will make their way to the bookcases in the annex. Once I relocate that black bag (it holds a bunch of Hero Arts card bases), all the standing stuff will live under the cabinet and it will look much neater. I probably won't be able to handle it.

Bobra couldn't figure out what happened to his exploring area. He does not like closed doors. See: 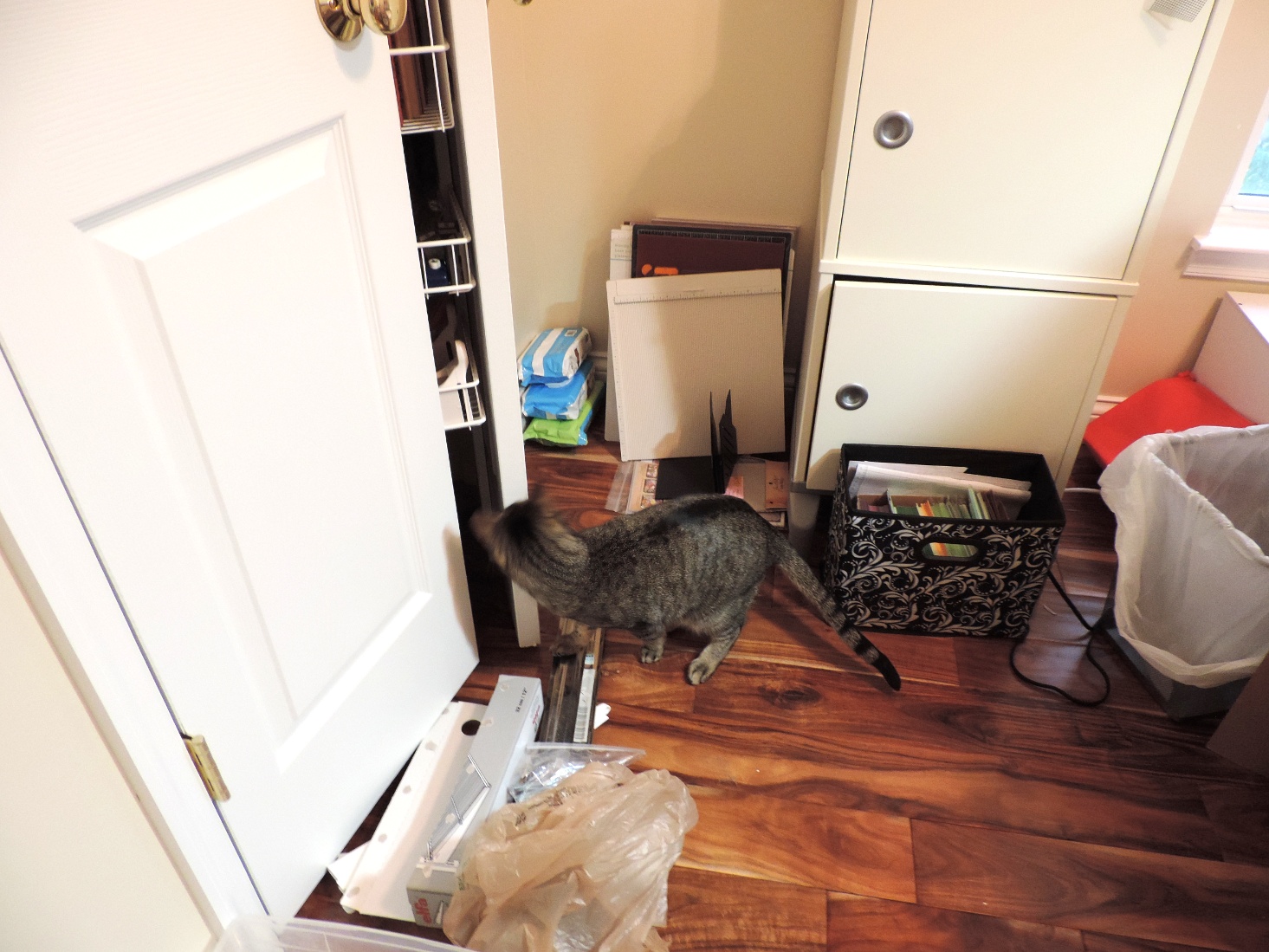 One other thing I did in the craft room was bring in my two wooden CD storage boxes, that now live here: 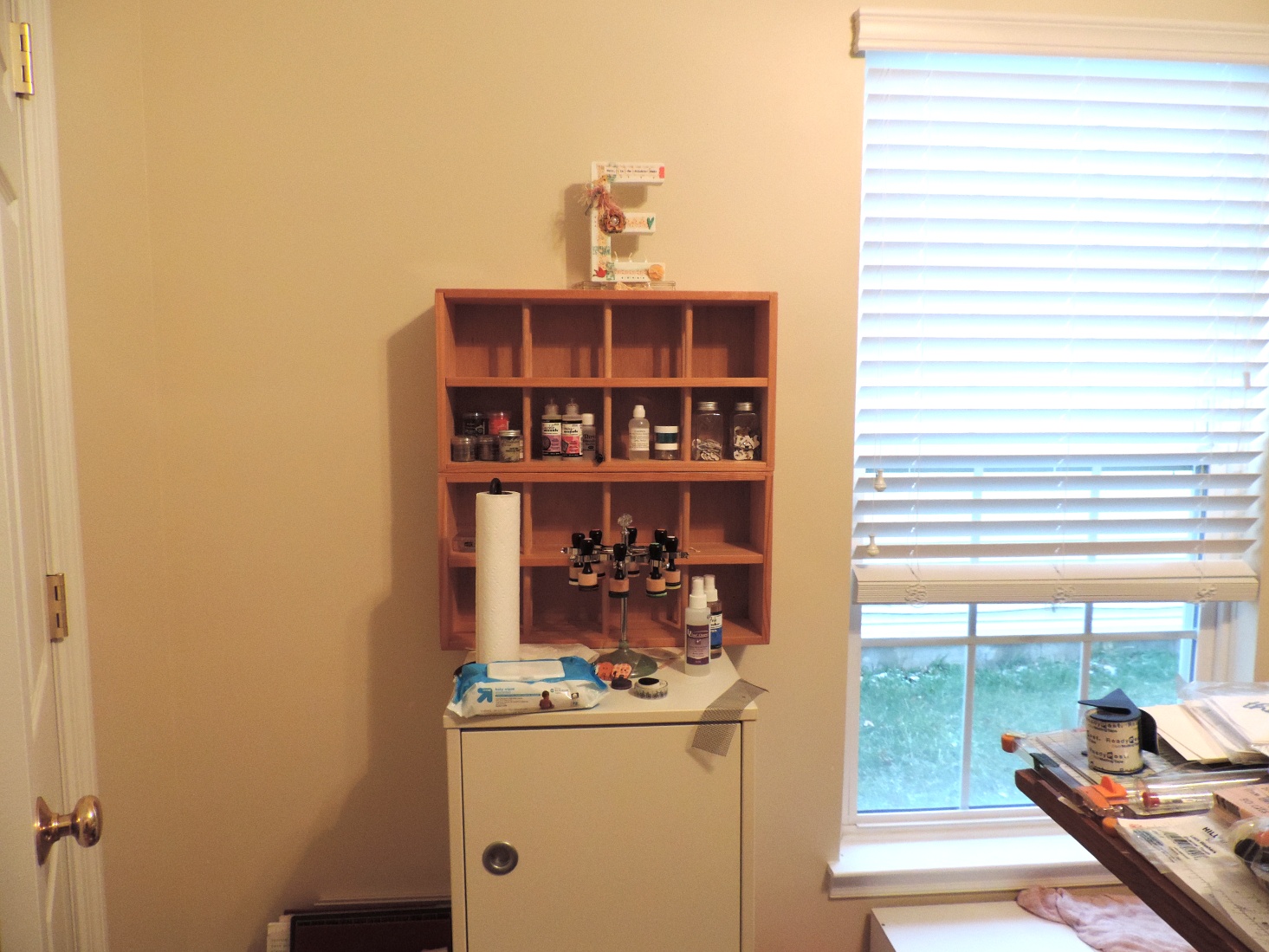 You can see the closet on the left and my standing desk on the right. Now that the closet doors close, I had room for the wooden boxes on top of my cabinet. I used these boxes in my old place to hold my black inks, my most-used acrylic blocks, etc. I see no reason why they can't be used that way again.

On top of the boxes is an altered letter E. I also have an M and an H (MEH), and these will eventually be hung on one of the walls as ART! I have several other pieces of "other people's" art that will also make it to the walls one day.

Oh, about those S-hooks? The next thing on my list to organize is a stack of boxes under my wooden library card catalog. I looked into one of them and found the S-hooks. I hung up my green basket and called it a day.

Up next: the desk.