It's FRIDAY! We're just about half-way through the SOS & Jingle Belles (you have no idea how many times I've typed "Jungle" Belles) BONUS challenge. I've made two more Christmas/Holiday cards, even though it is still September. The Belles make me want to play along.

First I made a "normal" card: 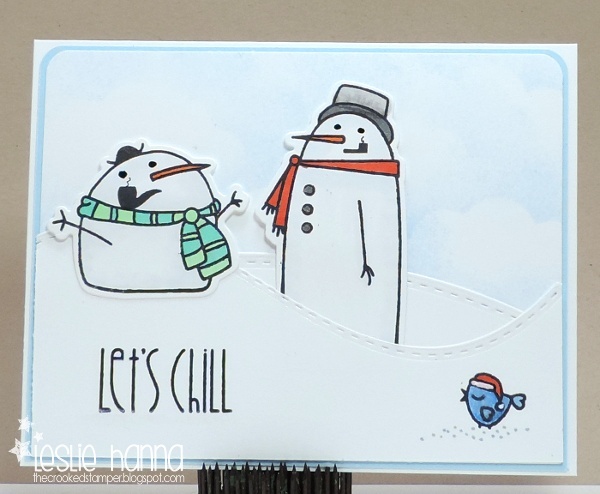 It's difficult to see because of my crack photography skills, but there is Wink of Stella glitter on the edges of the hills.

This card kindof morphed into being. I wanted to use my Swanky Snowdudes images (I've had this set for years) for two reasons. One, I was gifted a second set when I announced one of my dudes was MIA, and my pal handed me her duplicate set. Second, I finally bought the coordinating dies for the set. Unfortunately, I'd already bought them, so now *I* have duplicates. Maybe my pal needs them for her remaining stamp set. We are hopeless.

Another ancient craft item used: a set of Faber-Castell Pitt Artist Pens that were a gift from about four years ago. I wanted to put teeny tiny dots under the bird, and those pens have the perfect point to do so. I also colored the bird with the blue pens, since the set was out, and why not?

About half-way through making this card, I realized what card I should have made instead. So I finished the Snowdudes, then I made this: 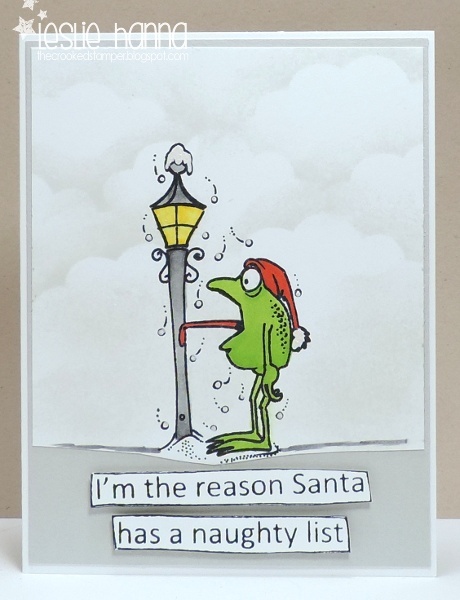 Gosh, I love this guy. The Frog image is from Viva Las Vegas Stamps. I don't think I've ever seen The Christmas Story, but I know a kid gets his tongue stuck to a metal pole. Since I'm clueless as to the circumstances of the sticking, I wasn't sure what an appropriate sentiment would be, so I went with this one. I've had the Dylusions Christmas set for years, and don't think any of the stamps have seen ink. I just fixed that.

I colored the image with Copics, and drew in a line to ground him a little. Then I schmeared black ink across the bottom of the white panel, so I had to cut it off. I mounted the hacked white panel to a layer of Simon Says Stamp Fog card stock, then put my sentiment along the bottom.

I also added clear Wink of Stella to the light to make it shiny: 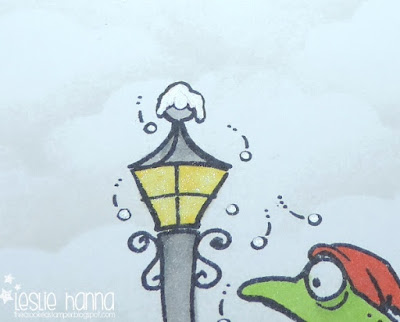 To fill in the snow, I used a Kirarina Wink pen I found stuck in my "every adhesive under the sun" tray on my desk. I must have purchased it after watching one of Jennifer McGuire's videos.

So, why not play along with us? Or play again, if you've already played. You'd be one more Christmas card closer to being ready for December.

If you do play, please link up at both SOS and Jingle Belles for two chances to win some goodies.