I guess it is time for full disclosure with regard to Da Booth, also known as my table set-up at my markets. Prepare to be un-impressed. 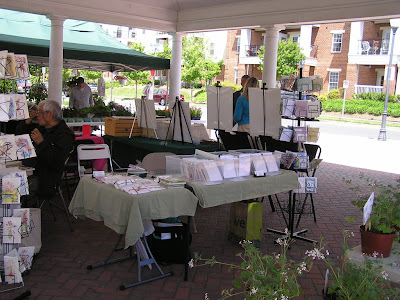 The spinner card rack to the right is mine, too. It looks a lot like the one on the left that belongs to the guy you see sitting there, and that is because he sold it to me! He had an extra one, and a year or two ago he offered it to me, and I took it! It comes apart so it actually does fit in my car. One of these days I'll do a full disclosure on The Car, where I store all this stuff from May to November.

You may find it interesting that I sit right next to someone else who also sells cards, but we really could not be more different. He is a self-taught artist and water-colorer who does amazing Chinese-style drawings. He prints his cards, mostly because he can; these are his drawings, so he can reproduce them any way he wants to! He also sells his larger watercolored drawings and occasionally some of his originals.

He also pushes me to try different techniques, meaning he thinks just plain stamping is not challenging me enough. (If he only knew ...) He thinks I need to broaden my horizons, and he ignores my whining about The Day Job and the teeny tiny condo. Therefore he was very impressed when I showed him that bamboo I drew the other day, and he laid off the pressure a little bit yesterday because of it. :-)

So that's where I spend every Saturday. Now for my Sunday markets, I set up a tent, and if I feel like it, I drag out the folded screen to block off the tent behind me: 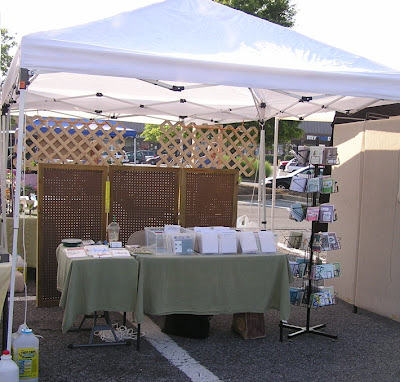 Other than that, this is exactly the same setup as my Saturday market. If I had to do any more than this my head would explode. In fact, the reason I flat-out refuse to do much more than this is I used to do a whole lot more than this. I'm talking 7' walls with hanging card racks, etc. Check it out: 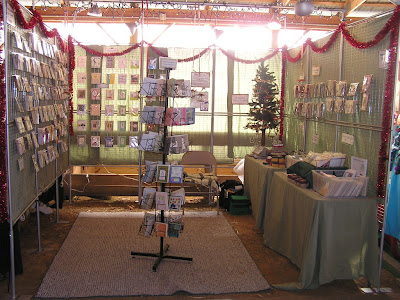 This is a really bad photo from Nov 2006; I had a barn spot (read: outside...these are at a fairgrounds, so you know what kind of "barn" I was in) at a huge annual Christmas Show in a neighboring county. Yes, it was cold. Back to the booth, though, that bugger took me about 2 hours to set up and another hour to break down, so I gave it up for my sanity. And my back. And my lack-of-sleep. I've even sold all but three of the walls to someone else to be rid of them. I still have all the lights and a masso collection of extension cords and power strips. And 8" cable ties. For a few years there I should have been buying stock in the company that manufactures the cable ties; I used them to secure the card racks, and they get cut off at the end of the show, so I had to keep buying more. The racks hung from S-hooks (oh, and I have a collection of those, too), and then I'd anchor the racks to the grids in the walls with the cable ties; two per card rack. Putting the cards into the racks was the easy part! I always thought something was very wrong when it took me 2 hours to set up my walls and card racks, and about 5 minutes to put the cards out. I decided I was too old for the whole process, so I scaled waaaaaay back, and I am much happier for it, too! I no longer do those bigger shows where a professional-looking set-up would be necessary to "sell" my stuff.

Maybe some day after I am retired and have more time on my hands, and when I can nap often, I'll get back to that level of set-up, but for now, not.

So that's it! Like I said, not too impressive, but then when you are surrounded by farmers with veggies, people think having a tablecloth is classy, and that's good enough for me!