Each week, jen del muro posts a Sketch For You To Try (SFYTT) and this week I decided to actually give it a try. As usual, I am practicing some Creative Avoidance and not cleaning for this weekend's workshops. Nope; instead I am using my new-and-uninked stamps so I can say I've used them before they get tossed into The Other Room, ne'er to be seen again.

This week's challenge spoke to me, and I decided to use my new Verve Visual Asian Flair set to make my card. I largely decided to do this because of her bamboo card on this post, wherein she outright enabled me to buy the set in the first place. So jen, this one's for you! 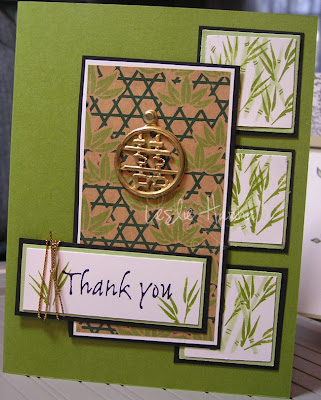 The bamboo is made (per jen's instructions when I begged via email) by drawing a line with a marker, then going back with the fine tip of a darker marker (hey, that rhymes!) and drawing lines across the wider marker lines. I just re-read that and it makes absolutely no sense, so just look at the bamboo - I drew it. In my case I used a very fuzzy Certainly Celery marker, then went back with the fine tip of the Old Olive marker to make it look like bamboo. A little aside: One thing I love about the DC area is there is bamboo growing everywhere. I understand it is much like a weed, which by definition is "anything you do not want growing in your yard". But it is beautiful and very green. So anyway, I layered the white on Celery, then Black. Yes, they are crooked...I know ... surprise!

Next I had this idea to make a Kimono out of a piece of the Washi Paper Stash I have, and after mangling a few pieces of other paper trying to remember the pattern and how I'd altered it the last time I did one, I gave up and decided to take my paper of choice and do a simple panel instead. Done!

I added the Double Happiness charm from my Charm Stash and secured it with a brad. Unfortunately, I decided to do this after I'd stuck the panel to the card with about 300 Dimensionals (kidding - it was only 6, but they really stick good!) and I had to peel back the top of the panel to get the brad in, then put on more Dimensionals to re-adhere the panel. Sigh. Good thing I get those babies at a discount, huh?

The sentiment is from SU's Artfully Asian set which is retiring, and I could not be sadder. It will not appear at any future workshops, but it is staying in my Keep pile of SU stuff because I like it!

I really like how this card turned out, and I might even make a few more of them!

Thanks for stopping by! And check out the previous post to see who won my Milestone Challenge. :-)