The Rule of Twelve

If you are domestically-challenged, you may not be aware that all standard shower curtains have twelve (12) holes in them for hanging on the rod, and this is to match the 12 holes in the shower curtain liners. That's just the way it is. How do *I* know? Well, when I was younger (much younger), I used to make my own shower curtains. Yep! I detested all the standard patterns, so I (well, my Mom) bought a full-sized sheet set in my pattern of choice; she kept the fitted sheet and pillow cases, and I got the flat sheet. You lay that bugger out on the floor, lay a liner over it, mark the holes, then using a grommet set and a hammer (this was the old days), you put in your grommets and voila - you have a shower curtain. Well, it was actually a bit too wide, so I had to fold over the fabric and sew the edge. But it opened up a whole new possibility for bathroom decor!

So anyway, I know there are 12 holes in those buggers, which explains why shower curtain holders/hooks/rings, etc. are sold in ... sets of 12! Funny how that works out, isn't it? :-)

Now, I have this theory about these sets of 12 rings. It is a conspiracy, and a quality control issue. Personally, I believe (and this is my idea, thunk up by lil' old me all by my lonesome): These rings should be sold in sets of 13, also known as a Baker's Dozen. This is to give you the often-needed back-up ring for when one of them goes bad, like this: 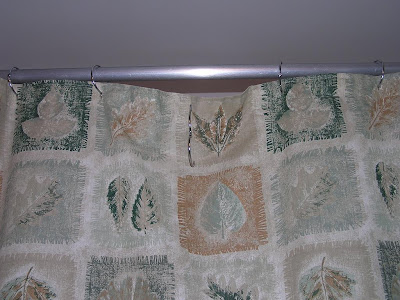 This ring has been the death of me for several months now. Why don't I fix it? Because I'll have to buy a SET OF 12 to replace just one ring gone bad. Then I'll have to store the other 11 in a dusty corner somewhere for many, many years, and where's the logic in that?!

I think the manufacturers of these rings (probably men, the same ones who thunk up pantyhose) are afraid to offer a Baker's Dozen because it would imply their product is so bad they need to give you an extra one in case one breaks. Bah, I say, bah! They should market it as "Get a free ring!" and it would sell like hotcakes! (Can you tell I was a Marketing Major in college?) No women would be offended by the implication of low quality. No, siree! We'd revel in the fact that we had a single backup ring for the inevitable situation of one ring going bad, and we'd buy the buggers!

As it stands now, the only choice we have is to buy 12 more and store 11, or in my case, I've actually switched styles of rings when going through this process. I used to have clear plastic rings/hooks, and when one broke and I was forced to buy 12 more of something, I switched to these metal rings, thinking they'd be less likely to break than plastic. When switching to this new style, I threw away the 11 perfectly good plastic rings. They were relegated to the trash for no other reason than one of their brethren had gone bad, and I had to buy TWELVE new rings.

That's my story and I'm stickin' to it.

I'm off to today's market now. It's supposed to be a Code Orange day, meaning you shouldn't go outside unless you really have to. So yeah, I'm off to the market ....
Posted by Leslie Hanna at 7:47 AM