I think I have already established here that I am in a contant state of "hopelessly behind". I took today off of work to try and catch up with Life, having spent both Saturday and Sunday doing Farmers Markets and not much else, though I did finish making the color charts for my customers last night. That's one thing done.

So today I had several big tasks to accomplish, and, well, I am tired and sore and mostly done. Sorta.

I started by skipping my shower, so I was at a deficit from the get-go. I had planned to do back-to-back loads of laundry, so it made sense at the time to hold off on the shower. So far (as of 7 pm) I have done 1 1/2 loads of wash, and I have 1 1/2 to go. Not a good track record. I think I'll get my shower before I turn in tonight, and not much sooner.

Then I finally divvied up my last SU workshop order and got those boxes out of my Dining Room. One of my customers wants them, so I carefully broke them down and stowed them in a corner so they do not end up full of cat hair and claw marks. 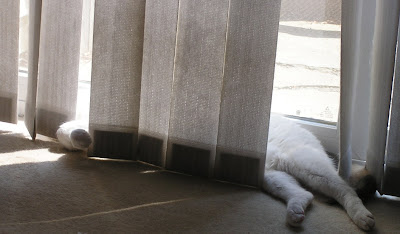 This is a typical day in the life of my cat - lying in the sun beam. Looks rough, doesn't it? By the way, I have fuzzy vertical blinds. Oh, that's not normal? Really?! 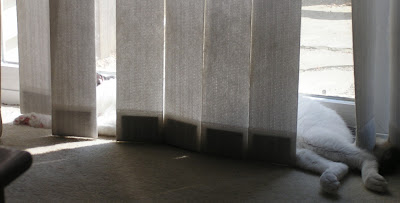 Oh, look, she's moved! Sigh, what a life. She did awaken to throw up once, but then she had to go back to sleep. I am sure it was an exhausting day for her.

So most of my day was spent finishing up my Brother's 50th b'day book. Being the older Sister, I have free reign to really make him squirm, which would work if he wasn't such a cute kid! I have it all done (DONE!) except for one page that I hope to do tomorrow evening. I am very proud of it, and I hope he likes it.

In between scrappin' episodes with the book, I did other domestic things. You know how in order to do one thing you have to do something else first? I hate when that happens. Totally throws me off schedule. LOL!!! Like I have a schedule. Or a plan. Or a clue. Nope, just an endless mental list of things that eventually need to get done.

So I wanted to dig into my CSA haul to finish cleaning veggies and put them away, but the sink was full of dishes. So I needed to put them in the dishwasher, but that was full of clean dishes. Heavy sigh. Had to empty the dishwasher, then fill it up again, and then I started in on the veggies. I rewarded myself with two pieces of Rosemary bread (from the market) with fresh tomato slices topped with fresh basil. Yum! And that is less to put away, too!

Oh, the title of this post? The "aaaaaaargh!" ?? That is because I was stupid and selected an already-bound spiral book to use as a scrapbook, and it came out too fat. The book will not close! Look: 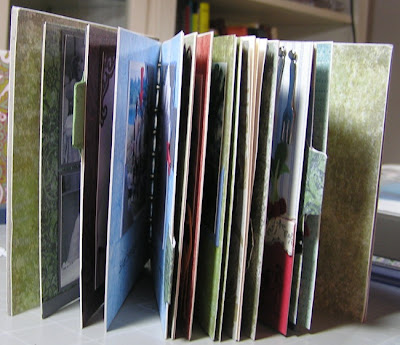 Sigh. I thought I was done. I could un-bind the whole thing and try to re-bind it with my Bind-It-All, but the chances of that actually succeeding are slim and none. I could wrap a huge ribbon around it to hold it closed. I thought about putting Jumbo Eyelets in the covers and tying it shut, and that might help a bit, but my biggest challenge will be figuring out how to ship the darn thing! At this point a bubble envelope does not look promising. Although, the bubble envelope would work if I laid the book open. I need to keep chewing on this. Double-sigh.

To reward myself for my few accomplishments today, I plan to go whip up something from the veggie pile for dinner and wash it down with some ice cream. Did I tell you the flavor of my market ice cream? Honey-Lavender. Yes, it is as good as it sounds!

I'll finish up this catch-up day with (hopefully) some stampin' in between the rest of the laundry. End of whine. Now back to your regularly scheduled blurfing, and thanks for stopping by!