Sunday I started to CASE this card and ended up with this: 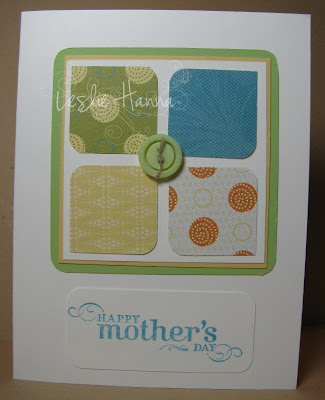 This is a great way to use up paper scraps. Did *I* do that? Nope. I need to have everyone's card come out the same, so I broke into two virgin pieces of Sweet Pea DSP and punched two 1 1/4" squares from each one. Since it's two-sided paper, I got four pieces of pretty-much coordinating patterns and colors.

I rounded two opposing corners of each square. This gave it an interesting look, plus the non-rounded corners were easy to position on the white layer, although mine are, um, er, crooked.

I also learned I need to re-ink my ink pads more often. As is my nature, I'll slave away and futz with a card for a long, long, time until I get it where I'm happy with the result, then I'll totally wreck it when I stamp the sentiment. Like this: 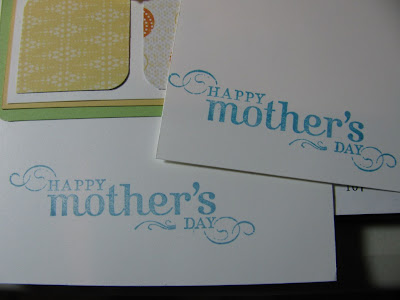 See how faint the one on the card is? See how much better the one stamped on the scrap looks? Yep, that second one was after I'd re-inked the stamp pad. Grrrrrr. But I saved it! I just cut out the second one, rounded the corners, and stuck it over the boo-boo: 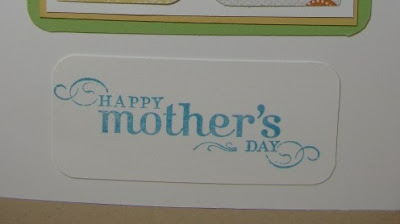 Now, if I hadn't told you that piece was covering up a boo-boo, would you have known? Hmmm? :-)

Then, as things go in my world. I realized I don't have enough of the green buttons to go around, so I tried a different version of the card using a blue button: 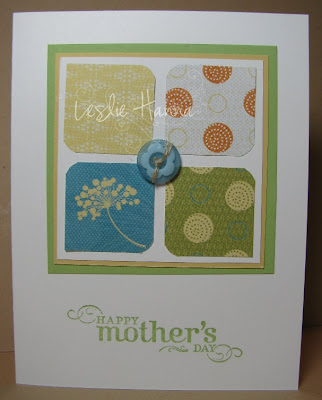 I also took this opportunity to not round the corners of the green layer, and to stamp the sentiment in green instead of teal. I like to give The Ladies options, even though I know it makes some of them crazy to have to think when they are here.

So now I have all four cards planned for my April Stamp Camps. Woo-hoo! Now I can start working on building up my inventory for my markets that start in ... YIKES - 4 weeks! ACK! *panic sets in*

Thanks for stopping by!
Posted by Leslie Hanna at 6:34 AM