We all know I have "issues" with focus and I am easily distracted. So tonight, I went into the Captain's Quarters to stamp all the numbers for the female version of this card: 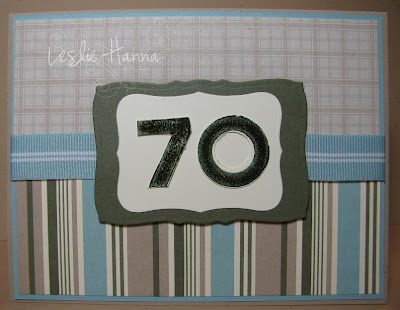 Yeah, I call this one of my "manly" versions, and I made a whole pile of pink ones for "girls". And no, I don't have an issue with gender roles; it's just that not a lot of people buy pink cards for guys, you know?

So ANYway, I sat down to stamp some Basic Gray numbers, but then I spied some bulldog UFOs in my UFO pile, and I pulled them out to finish them. I had three bases, but only two bulldogs & sentiments, so I made two of these: 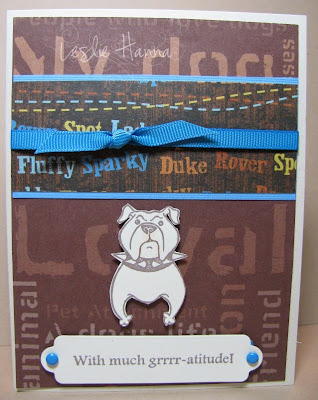 Then I went in search of my bulldog stamp, and decided while I was at it, I'd put away (put away, I KNOW!) some of my other stamps. As I was putting away (that actually hurts to type ... I just thought you should know) my Rosie's Roadshow wiener dog stamp, I found a Rosie's sentiment that would be PERFECT with it. In fact, I'm pretty sure I bought the sentiment because I already had the wiener dog. Lookie: 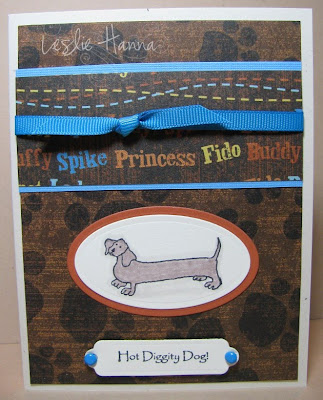 Yep. Perfect! I should also point out that this is a study in brown, as no two browns on here are the same. I like to live on the edge.

Then, using Basic Gray classic (dye) ink, I stamped a bazillion numbers, mostly because I couldn't get the darn things to ink properly. I finally decided I liked the mottled look, and I plan to say "I meant to do that" to make it all okay. Check it out: 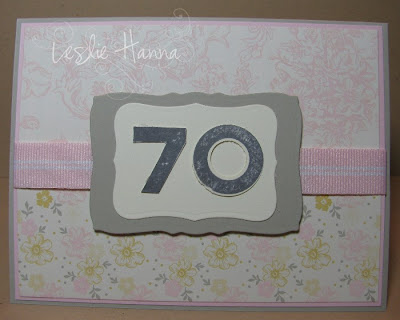 This is one version of my "girlie" cards made from several pieces of Parisian Spring papers from my stash. I have several combos, but they are all this flavor of pink. The base and one grey layer are Sahara Sand.

See how the numbers didn't stamp very well? Yes, I reinked the pad. So "I meant to do that" is totally necessary, as my arm gave out with all that stamping and applying even pressure and reinking and starting over. Sigh.

After I threw out my arm stamping all those numbers, I decided to finish cutting the manly numbers, bag them up, assemble all the manly cards, apply numbers to about half of them, and call them done. I did all 20 of them. I just need to stamp the backs, then bag & tag them for this weekend.

I then assembled one girlie card so I had one to show you. Actually, they're half-way assembled - all the main layers & ribbon are done. I just need to put together the two pieces for the base of the numbers, then cut out all the numbers. Tomorrow. I'll worry about that tomorrow. Unless I get distracted again. Hey, it could happen.

Thanks for stopping by!
Posted by Leslie Hanna at 8:38 PM