Good news! I have received two special order requests! YAY! Unfortunately, I am behind with everything else AND my Stamp Camps are this weekend. ACK! So I have forced myself to step away from the Twitter and f-o-c-u-s. This evening I plan to show you what I've done so far this week.

First up - another set of note cards: 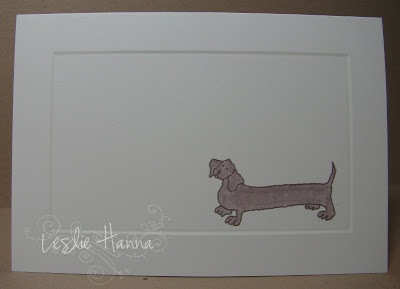 Saturday someone asked if I had a dachshund image that was not all unnaturally strung out. I thought I did, but apparently I don't. I thought this Rosie's Roadshow wiener dog would work, but he is a bit elongated. Whatever, I made a pack of 5. He's still pretty cute!

Second up - another set of note cards: 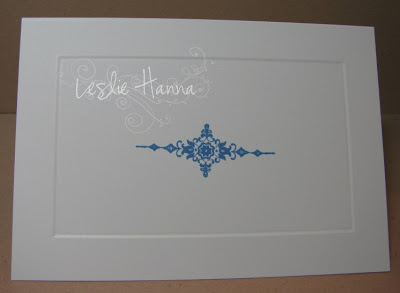 Isn't this image great?! It's a sneak peek from a set in the upcoming SU catalog, and I went totally loco and inked it up with some purchased-long-ago-but-just-now-opened Ranger Distress Ink - Faded Jeans. I've gotta tell you - this stuff rocks. I love it! Fortunately for me I have about 8 colors, and now I'll probably open them and use them. What a concept! 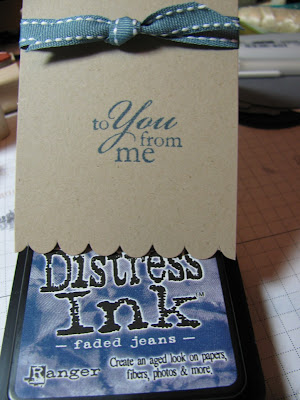 I even used one of my SU sentiments I thought I'd never use ... I just don't have a lot of occasion to say "to you from me". I also used a long-ago retired SU note card. I'm mostly using these for my Thank You notes in my etsy orders. (THIS was not a Thank You card ... just sayin' ... before you ask ...)

Moving right along, remember this pile of stuff on one side of The Captain's Table? --> 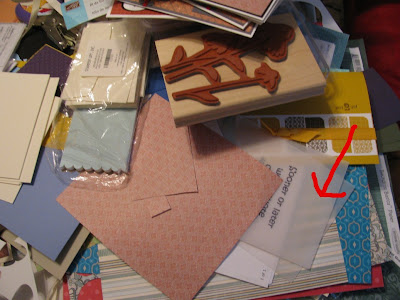 That red arrow points to some vellum I printed out last month. I figured if I was going to be printing Mother's Day stuff, I might as well print out some for Father's Day while the printer was on and I was in the mood. And here they have lived ... until tonight! 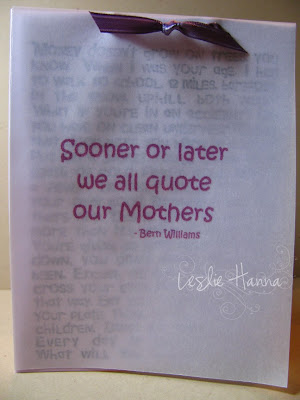 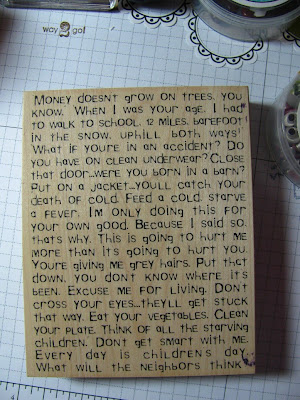 Here is the Dad version of the card: 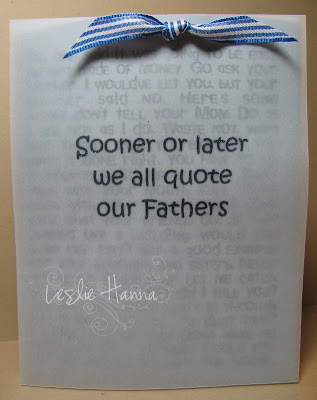 HOWEVER, I did have a successful SAVE tonight! You see, I was so good, being riddled with guilt and all about the state of my work space, that after I got done stamping the Dad Quotes on the blue card bases, I immediately cleaned the stamp. I DID! Then I, um, you see, before I could close the ink, I dropped one of the card fronts into it, and I needed to get the just-cleaned stamp out and ink it up so I could stamp it again on another piece of card stock. Yes, I am whining.

Oh, and I did it more than once, too. One of the other times ("more than once" can be 3, or 4) I got ink on the back of the card, so I tore off the damaged back saving it for the Scrap Heap, and looked at the pretty-okay-stamped sentiment. Hmmmm. What a waste to toss it, so I trimmed it and stuck it to a white base, then finished the card like the other ones: 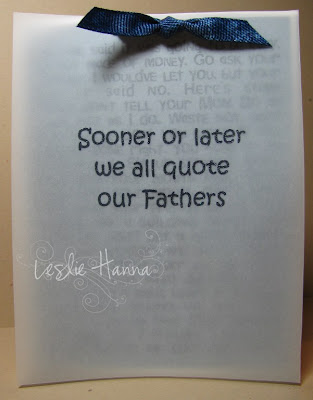 YAY! And I even like this one better than the others. Too bad.

So now that all of this is behind me (even bagged and tagged already!), I can start work tomorrow evening on my custom orders.

Thanks for listening to me whine, and thanks for stopping by!