Market Update and a Card

Today was GLORIOUS! It was supposed to be stoopid Hazy, Hot & Humid, but the gods smiled on us and it all stayed away. We even had a breeze! This is the view down Main St from the market: 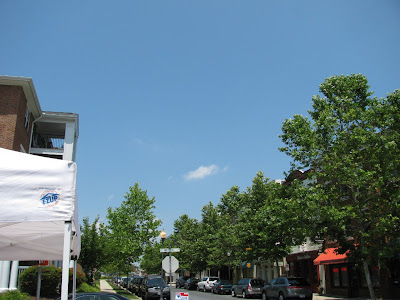 Before we get to some market pics. I wanted to show you the smaller banner I got for my table:

On to the fruits & veggies! Here we have Berry Central: 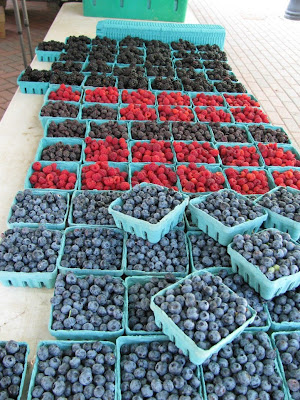 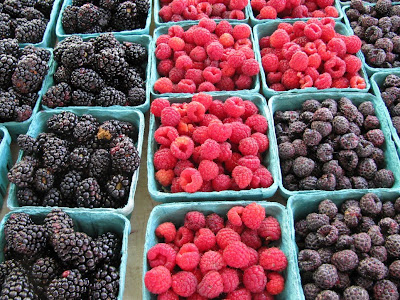 From left to right we have blackberries, raspberries and black raspberries (or as Farmer Mike put it: raspberries with a sun tan).

At the end of the day, this was the aftermath: 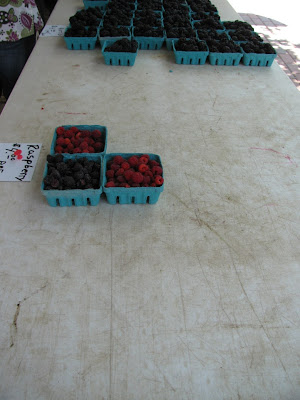 We had some peppers today: 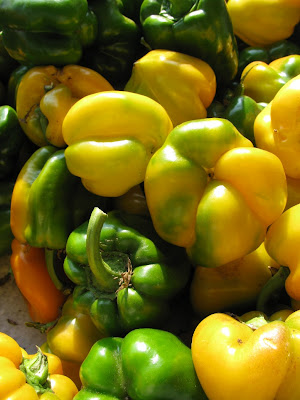 (love these colors!) ... and here is my fave view of this yummy goodness: 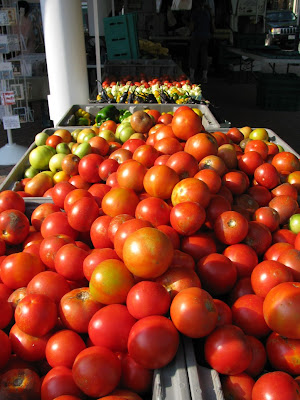 One of the other farmers had blueberries and cherries: 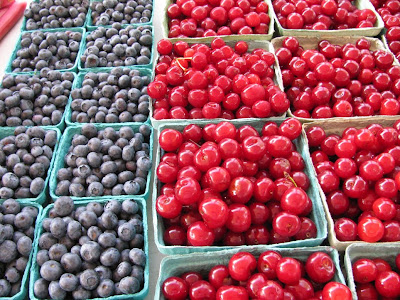 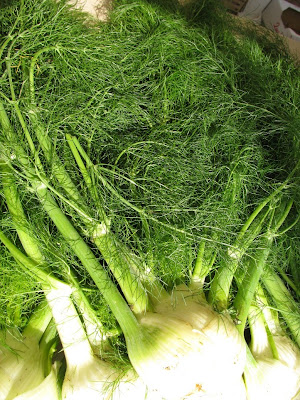 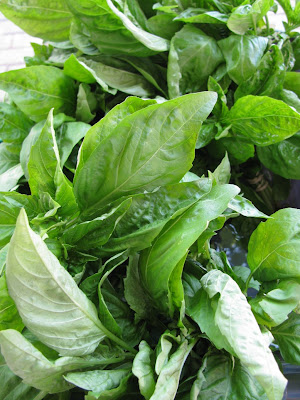 The kids were back with their beverage table: 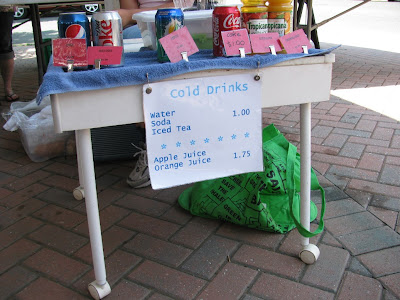 ... and they were QUITE popular! People have been asking for them for weeks! Now school's done and they can finally come. Notice that handsome signage? And the incredibly intricate attachment mechanism? Hey, it works! And it's from last year, so I did something right. And yeah, I'm going to make them a recycle bag & sign this week. (That green bag was a loaner.)

The rock lady had this: 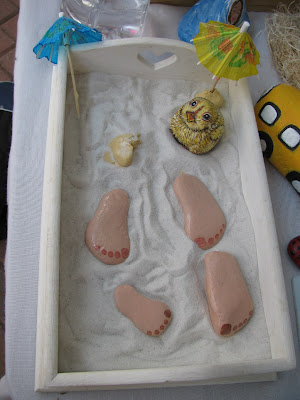 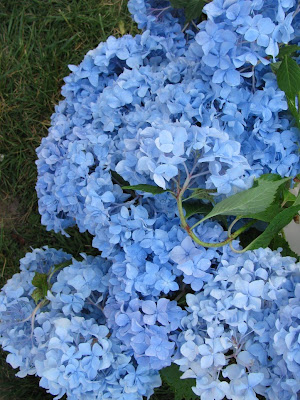 I got one in my arrangement this week: 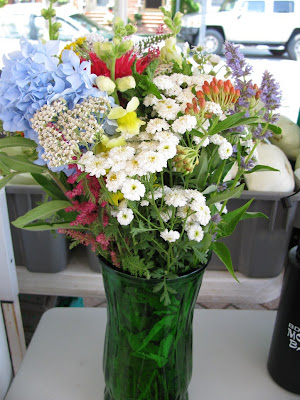 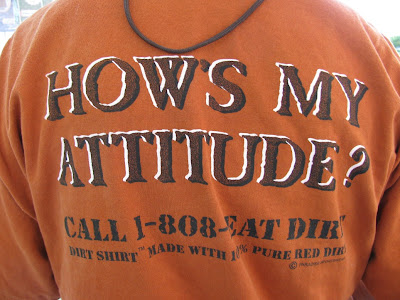 She said it was an authentic dirt shirt - a white shirt colored with the read rock "dirt". The things you learn at a farmers market.

Moving on... I hope you'll forgive me for no doggie parade this week. Nope, I sat on my hands, mostly because you've seen them all by now. But then THESE GUYS showed up: 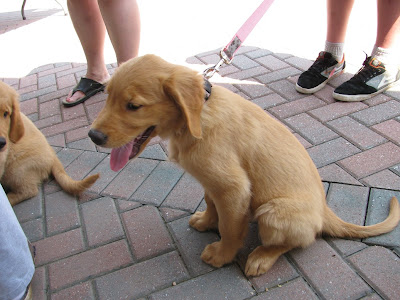 ACK! I almost died from the cuteness. People kept coming up to her to see the pups. I'll bet she was there for over 1/2 an hour. FYI, she has two other older dogs at home for a total of 4. She said she had twins, and it was easier to deal with two at once. Okay. I hope she comes back later this summer and lets us see these beauties again!

Right at the end of the market someone stopped by and looked at my Milestone cards. Those are birthday cards I made a few years ago with specific years like 30, 40, 50, 55, 65, etc. One year someone told me I need more 90s, since the market is across the street from an assisted living residence. ;-)

ANYway, when I made the cards, I left a few without the year so people could customize them. It's not like you'll find a 53 anywhere, am I right? And for the record, I did make a 53 for someone. So today, someone was looking for a 100. 100!!! She ended up picking out a different card from my Any Occasion section and we put the 100 on the inside. How fun! So I've realized I need to make more of these Milestone cards, including some with no numbers. It will be a GREAT way to use up some of my pretty papers, so I've added it to the list of things to do.

After I got home and showered off the hot, I decided to make the three remaining cards for my custom order. After stepping into the Captain's Quarters, though, I was distracted instead, and immediately invoked my creative avoidance skillz and dealt with these parts left over from yesterday's challenge card: 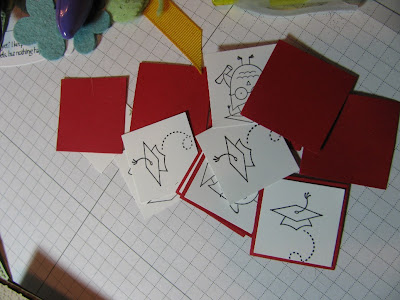 I had stamped and punched some of the other images from Go, Graduate, but then ended up not using the squares on the card. So how easy would it be to take these already-stamped images and USE them??!?! Easy, peasy! Lookie: 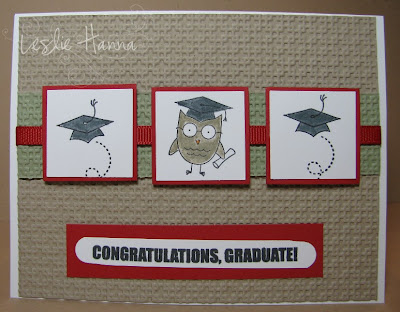 Everything on this card, except the white base, is made from remnants (formerly known as 'scraps'). The Kraft pieces were cut, but not used, so I embossed them and used them! The green embossed strips under the squares were left from trimming the green panels for yesterday's cards. I stamped the sentiment on a remnant of white, trimmed and cut it badly, and layered it on a remnant of red. (I may actually break down and re-do those, as they sucketh.)

I colored the hats with my SU Basic Gray marker, and the owl with my new Crumb Cake marker. Just think of it as a Kraft marker, and you will be as excited as I am for the new SU catalog in just a few short weeks! :-) 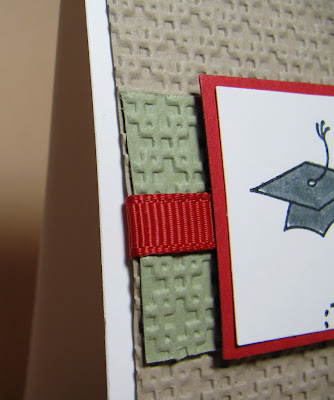 I was amazed when I looked at these pics to see how it just blended in with the Kraft layer. But they are gone from my table, and they do break up the Kraft. It's good.

So tomorrow morning I'll make those remaining three cards I need for my special order. Then I'm getting a pedi. Yep, it's time, and I'm worth it. After the pedi, I hope to get crafty some more so I'll have something to show you.

Thanks for stopping by!
Posted by Leslie Hanna at 9:32 PM