I'll bet you came here to see pics from today's farmers market, but I'll be disappointing you there. Oh, I took plenty. In fact, I started to scare some people. I think it's official: I am the scary lady with the camera. But I have a bazillion pictures of Geisha kids, so I started wading through them, and got tired before I was done. So the good news is you will not be inundated with all 16 Geisha cards, even though that's how many I made. The bad news is I didn't get to the market pics, so I'll post those tomorrow.

I thought I'd start in the middle. You've seen the thread-pulling exercise, the stack of finished layers, and one finished card. Never one to leave well enough alone, I had to tweak things as I went along. First up, we had a decision of "which blue looks better?" You see, when I stamped the little kimonos, I picked card stock colors that I thought went with the fabrics. But in reality, that was like picking a paint color for a whole room based on a 1" square paint sample. Those exercises can sometimes end very badly.

For the blue, I had selected Brilliant Blue, but when I put the Brilliant Blue as a background under the fabric, I didn't like it. I next tried Pacific Point, which, in my mind, was darned close to Brilliant Blue. But 12 photos later, I finally managed to capture the subtle difference: 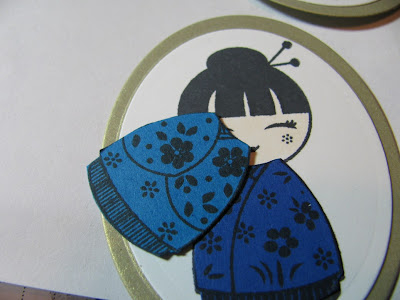 The one on the left is Pacific Point. Side-by-each, you can see it's a little bit lighter - not such a deep color. This, my friends, made all the difference. Lookie: 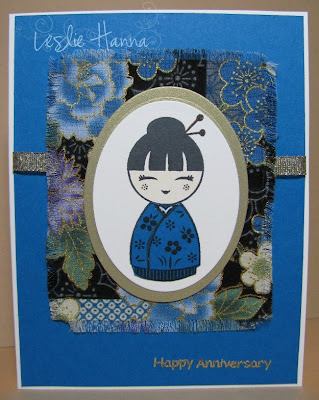 I love those Class-A-Peel word stickers. I think they are just perfect with these images.

Then I had A Moment, where I thought I should layer a few of the images with what remained of my Brushed Gold card stock. I measured, I cut, I trimmed, I trimmed some more, and I ended up with this: 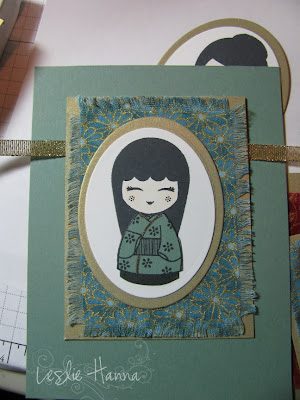 Eh? Not so much. I scrapped the idea.

One of my biggest challenges with these cards, aside from the fact that I ended up with parts for 16 of them (what was I thinking?!?!), was how to stick the fabric to the card stock. No standard two-sided tape or ATG tape would work, so I went for the red sticky tape. Oh, it sticks all right, but not to the fabric. At least not as long as I was picking at the ends of it to try to separate the backing. Once I got the backing off, it stuck to the fabric just fine.

But I must tell you: four strips of that red tape on the back of each fabric rectangle, times 16, was making me consider taking up heavy drinking. How outrageously frustrating! After about 5 or 6 cards, I went to Twitter and sent out a plea to all my crafty peeps, asking for suggestions. One was to use Crystal Effects (Diamond Glaze), but that would be wet, and I wasn't interested. Next: Xyron (a sticker-making machine, for you non-crafty types.) I ran a piece of fabric through the Xryon and it did not stick to the fabric. Drat. Next I thought about the do-it-yourself laminating sheets, but then I realized it's only sticky on one side. Doh!

Then it hit me: I have sheets of sticky paper (sticky sheets - like the red tape only in a 12x12 sheet). YES! I'd bought a bunch of them when they first became available from SU, and finally I got to use them! I cut a rectangle of the stuff to fit inside the center of the fabric rectangle and started to peel off the backing. It came off after the first try! YES! Success! I did a happy dance.

So I finished assembling the remaining cards and then went back and added the gold edging and the white collars on each one. Finally, I added my Class-A-Peel sentiments. DONE! I had 16 cards all finished. It only took me about 24 hours (minus time to sleep, but a full day all the same), after which I screamed something like, "I'm selling these for TEN DOLLARS EACH! OMG!" But I didn't, though these cards might be enough to push me over the edge and do tiered pricing. Seriously.

Since I worked so freakin' hard on these, you now get to see a few of them. You've already seen the blue one, so we'll start with a green one: 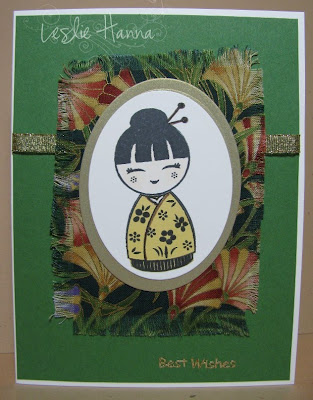 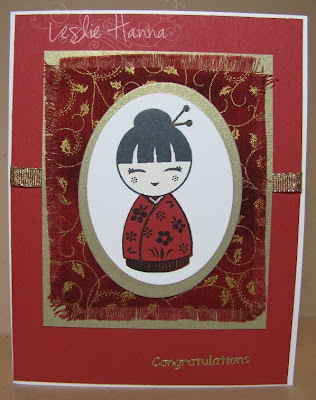 ETA: Okay, this one got a gold layer. There was a brief discussion at my table today between two ladies pondering my Geisha gals. They liked the gold layer on the red one, but as one of them pointed out, she didn't "miss" it on the others. I hope that makes sense to you, because it does to me, and beyond that, I am unable to explain it. 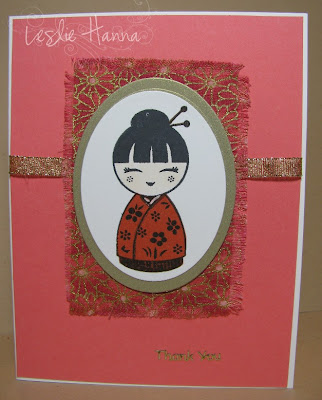 For this coral-orangey one, I started with the orange kimono, but decided the orange was too dark to use as the background, so I used Cameo Coral. Oh, and speaking of Cameo Coral, it retired like three days ago, and I stashed all the retired card stock in the bottom part of the cabinet. Bad idea. I spent part of the day on my knees, bent over, digging for the color I wanted. Time to rethink that card stock storage system again. (Ow, my back!)

Moving on, here is one of the blue-green ones: 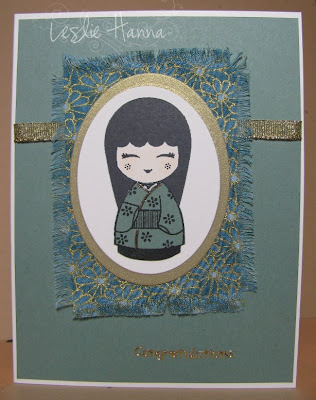 This is PTI's Ocean Breeze, and I LOVE IT. I love it so much, I am almost out of it. Must.order.more, but I'll wait until after this month's release, just in case there's something else I NEED.

Perhaps you noticed that sparkly gold ribbon I used on each and every one of these. That is from a spool of retired SU ribbon (it also came in silver). Even though I put it on 16 cards, and I cut it too long so I wasted some on the backs, I still have some left. I tried.

So after this little tirade, you'd think I'd be done with mass-production, right? Oh, no no no no. I got confirmation 2 weeks ago for an order for cards for a charity - the result of a discussion begun last summer. Yep. Originally she wanted 10, but now it's 25.

So after this order, no more mass-production for me. Nuh-uh. I quit. I think it's the "no instant gratification" thing. When I make one, two or three of a design, it's fun. It goes fast. I get it out of my system. I move on. I like that plan, and I'll stick to it the best I can. Promise. I think.

Tomorrow I plan to finish the 25 pig cards (yes, I said "pig"), then get a little domestic, then do some serious STAMPING. I hope. And I'll get the market pics up tomorrow, too.

Enjoy this long weekend! Happy Independence Day to all my USA readers, and thanks for stopping by!
Posted by Leslie Hanna at 5:31 PM