I have fallen behind on my challenges, and I'm trying to get back on track. I think it helps stretch my imagination and creativity, and I use some of the crap stuff I have in The Captain's Quarters, currently clogging my floor. The paths, they narrow.

When I saw that this week's Hambo Hoedown challenge included a sketch, I had to do it. Since I didn't play last week, I didn't get the free image, but never fear! I have a bazillion Hambo images, both digital and rubbah, so I was cool.

Here is the sketch: 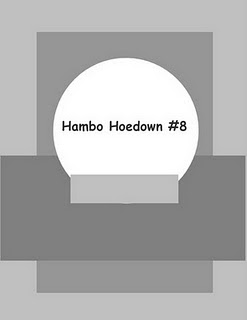 ... and I used their Drooly digi of a cute dog and two sentiments to create not just one, but two cards. Here is the first one: 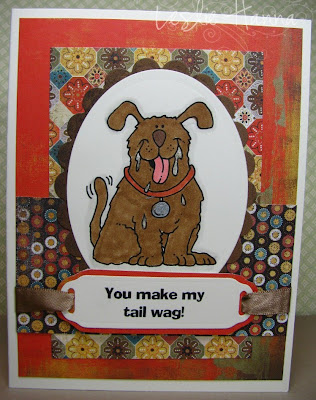 I took a few liberties by using an oval instead of a circle, and I put ribbon through the "dog tag" sentiment. The papers are Basic Grey max & whiskers. I love that I can pick out any papers and they just work together. I colored the dog with Copics, and used a silver glitter pen for his tag, and a clear glitter pen for his drool.

Okay, how many of you have been slimed by a drooly dog? *raises hand* Hey, it happens, but it's done out of love, or begging, or "you are sitting in my spot so I'll lay my head in your lap". I thought he liked me, but his owner told me I was sitting in the dog's spot. I didn't wear those slacks again that weekend. Ew.

Since I had to print the dog and sentiment, I went ahead and printed him twice and also printed both sentiments. It was the most efficient use of that piece of card stock, plus I got two cards instead of one. :) There are a LOT of dog people at my markets, so I hope this one sells.

The second card is the same as the first except for the background color and, yes, the sentiment: 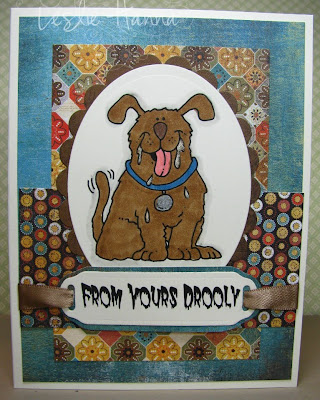 Okay, off to post this to the Hambo Hoedown site and catch up on some laundry so I can go to work tomorrow.

Thanks for stopping by!
Posted by Leslie Hanna at 7:30 PM