This week's challenge over at Jingle Belles Rock is called Holly & Ivy. In their words, "incorporate holiday foliage into your masterpiece. this could of course be literal holly and/or ivy; but then there's mistletoe, too, and did you know that poinsettias--whether red, white, green or even PINK --are all actually considered leaves and NOT flowers?"

Then we have MY interpretation of "holiday foliage", which I streeeeeeeeeetched to include the greenery that people use to adorn their homes. You know: greens, like evergreens. Mmm-hmmm. Which brought to mind this punch: 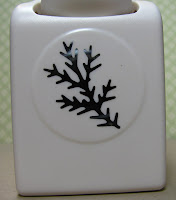 I own this punch. I have never used this punch. I used it today and called it "evergreens", which only adorn people's homes during the Christmas season. It totally DOES count. So here's my card: 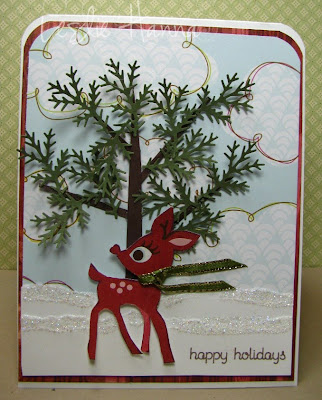 So I had this idea ... there it is again ... to use punched-out fronds, if you will, to build an evergreen tree. I cut strips of dark brown from a scrap for the tree trunk and branches, then stuck the fronds to it and called it an evergreen tree.

The cloud paper is a piece I, um, may or may not have bought today at my LSS and needed to justify its purchase. The deer is cut from a piece of paper from the Basic Grey eskimo kisses 6x6 pack. I almost used him last week, so he was still in my frontal lobe.

The really fun part of making this card was the collaboration with my tweeps, as this was the second card I made while live-streaming my crafty table today. They suggested the deer in front of the tree as opposed to the right side (where I had him). We also discussed scarf options, well, when they weren't discussing other things amongst themselves. I think I lost control of my chat about 3 or 4 times. And once they yelled at me because I wasn't paying attention to the Chat room. They are a tough crowd.

That's it. That's all I have to say about this card, except that it was fun to make! So if you haven't already done so, check out the Jingle Belle's blog and play along!

Thanks for stopping by!
Posted by Leslie Hanna at 5:52 PM