I started out the other day with a piece of old old old embossed vellum that I desperately wanted to use. It is green and purple. I actually like the colors, but I've obviously not yet figured out what to do with it. So I tried. I tried really hard. After four days and many changes, I ended up with this: 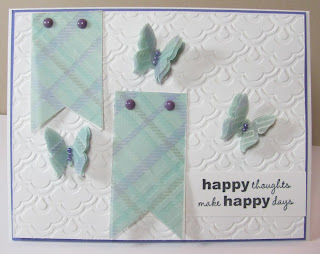 This is not even close to how it started out. The butterflies are punched from the paper and are I think five layers each. (I told you it's been DAYS, people, DAYS.) They were already stuck down on the original failed design, and I couldn't remove them, so I took out all the weird stuff I had going on in between and had to come up with a way to cover up all the evidence, so I made up those banner things. Those banner things are two layers: vellum + white card stock. The two layers were necessary because there was an awful lot of evidence left behind from the earlier attempts.

Those things holding the banners in place are handsome purple brads. :) Then I colored some mini pearls with my BV08 Copic to put down the middle of each of the three butterflies. The sentiment is from the SU Apple Blossoms set. The purple paper is from my stash of retired SU card stock.

Here's a close-up of one of the butterflies so you can see the texture on the vellum: 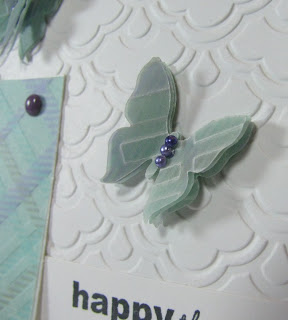 So, yeah, I'm not feeling the love, but I'm glad it's finally off my desk so I can move on.

In other news, tomorrow is FRIIIIDAAAAAAY! Whoot! I have a few partial projects on my desk I hope to actually complete this weekend so I can show you what my brain has been doing lately. :)

Thanks for stopping by!
Posted by Leslie Hanna at 9:44 PM