If you're like me, you are a collector. Not a hoarder, a collector. Hoarding is a sickness; collecting is not. So I have been collecting buttons since I started this hobby, oooh, about 9+ years ago. I finally got a bug up my butt that I needed to organize them. Actually, I need to re-organize EVERYthing, but buttons first.

I was going to color code a few drawers in my library card catalog, but then I realized the SU ribbon spools won't all fit in there, and neither would the buttons, so I've put that on the back burner for now. I may still organize other things - later.

Buttons. I haz buttons. The first thing I did was get a box to use to sort them: 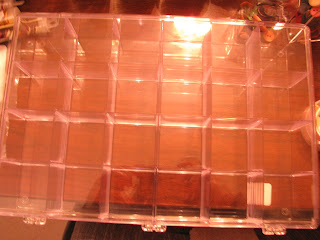 (I apologize in advance for the yellow lighting. I was in a sorting frenzy.)

Then I took out all my buttons from their various hiding places and looked at them. 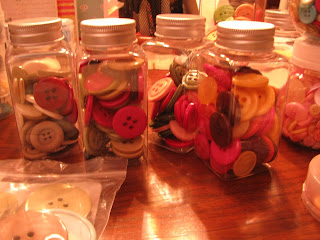 My mini button collection plus some others, in jars: 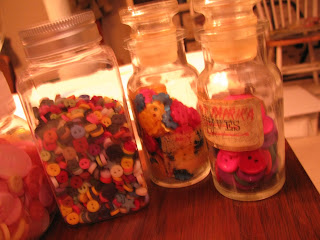 A package of A Muse aqua buttons in an IKEA container: 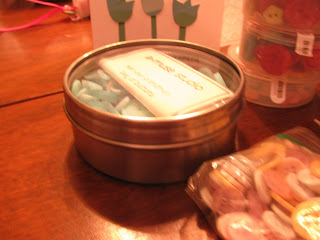 I also had another container like this filled with a package of "misc buttons" I was compelled to buy a few years ago.

Some Bazzill button tubes from forever ago, and a zip-top baggie of baby buttons: 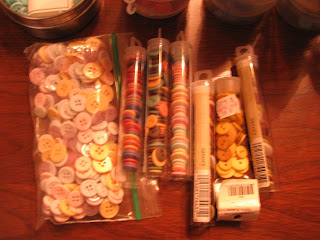 Some more misc buttons and my stash (on the right) of buttons I picked up at Mike's in December: 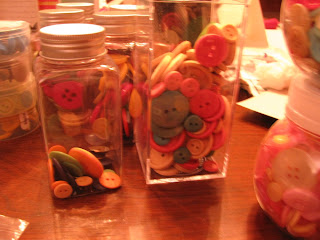 An out-of-focus shot of two containers of PTI buttons and my mini buttons again: 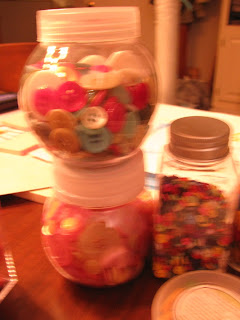 My stash of SU button collections: 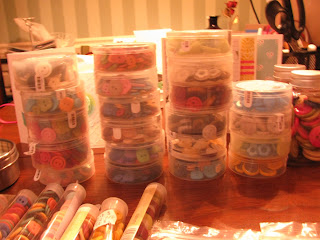 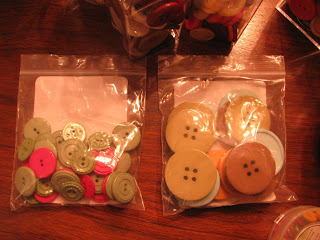 The toughest part for me was breaking up the sets. I like keeping the SU buttons in their original containers, especially since they fit so nicely in the Sack & Store Caddy. Okay, I have three of the caddies, but still ...

So once I got over that, I set in to sort all of these babies by color. Here's what I ended up with: 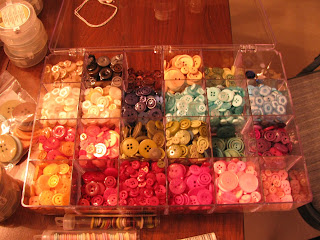 And a side view:

These are 2" square sections, and the box has 24 sections, so yeah, that's a lot of buttons.

About half-way through the sorting exercise I realized this container would not work as permanent storage if I wanted to interact with the buttons. I need to be able to see what's in each section, and rooting around in one color flings them into another one, and you can't dump out only one color ... not working. So I went to the store and got more of those plastic bottles, and proceeded to put one color in each bottle.For some of the colors I re-used the larger PTI containers and also that tall plastic one that held my Mike's collection.

In the end, I have this: 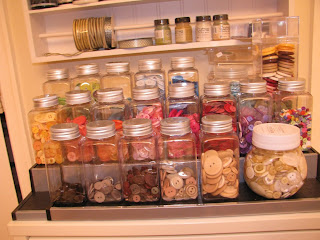 All lined up like good soldiers on an expandable spice rack. I put the fuller bottles on the top tier because I can see the colors peeking out over the tops of the next tier.

You can see a re-used PTI container there in the front that holds my whites & creams. It would have taken two of the jars/bottles to hold them, and this made more sense. I also found I do have black buttons! And grey!  I granted each of them their own container.

While sorting, I tried to incorporate ALL my SU buttons into the fold, but alas, there wasn't room in the bottles if I included what I affectionately call the Big A$$ buttons, so those had to come out. I mean, seriously, if I'm looking for a button, I already know if it is or is not going to be Big A$$, right? So all of those got to live together in this container: 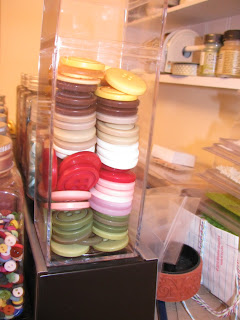 So what have I gained? Besides a miniscule semblance of order? I had a trip down memory lane with these button containers: 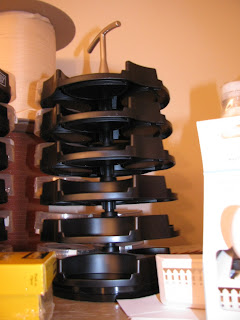 Next on the agenda: I need to organize my brads and eyelets. Not the ones I've already shown you, but the ones still lurking in the bowels of one of my drawers, and also in 2 more Stack & Store Caddies. If I do this right, I can reclaim the top of my library card catalog! Whoot! Wish me luck!

Thanks for stopping by!
Posted by Leslie Hanna at 1:16 PM

Email ThisBlogThis!Share to TwitterShare to FacebookShare to Pinterest
Labels: Organization