Earlier today, my bloggy pal and tweep Lydia (aka: Understand Blue) was issued a challenge over on SplitCoast to create a card for Leap Day. The challenge was to use something that leaps. :) She asked us to play along, and I had an idea... but was trapped - TRAPPED, I TELL YOU - by the pesky Day Job.

When I finally arrived home, I was greeted by Happy Mail - my green Faber Castell Gelatos arrived! And they went perfectly with my original idea, so into The Captain's Quarters I went.

I wanted to play with a few other techniques using the Gelatos that have so far failed me.  This time I scribbled them onto some SU Very Vanilla card stock: 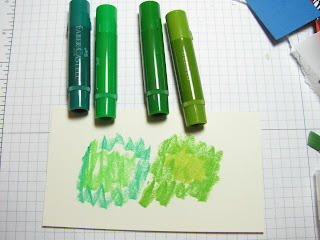 Then misted them and blended the colors with the brush that comes with the Gelato set: 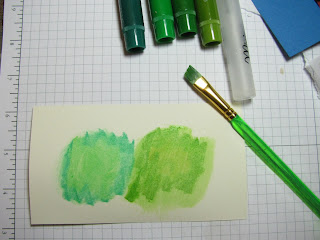 Then I stamped my image: 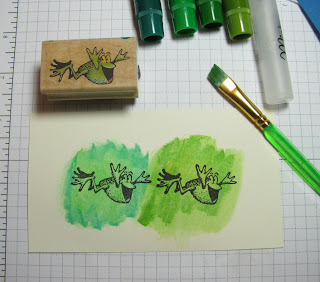 I likey! Then I realized the images were too close together to die-cut them. I decided I liked the colors on the left better, so I went with those and re-did the coloring/misting/schmearing/stamping. In fact, I liked it so much I re-did it FOUR MORE TIMES until I got it right. ;/ Here is the final one: 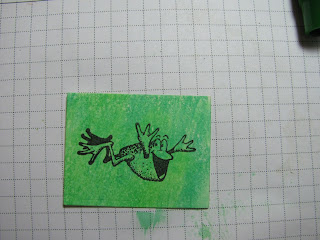 Then, since the mess was still out, I tried coloring a glittery Thicker. here's the tool set I used: 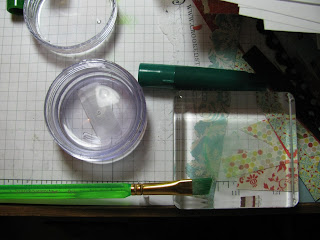 Water (in an old Flower Soft container), brush, Acrylic block, and Gelato pen/marker. I colored the Gelato onto the acrylic block, smeared it around with a wet brush, then painted it onto a glitter test letter: 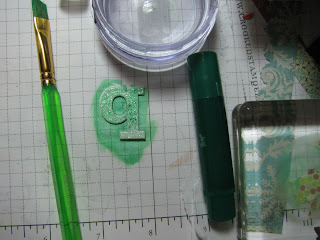 It's pretty cool! I also colored the Gelato right onto the letter and wet it, and it looked the same, but was a lot messier. Then I decided against the green glitter letter idea for this card, and went with a stamped sentiment instead. Here's my finished Leaping Frog card: 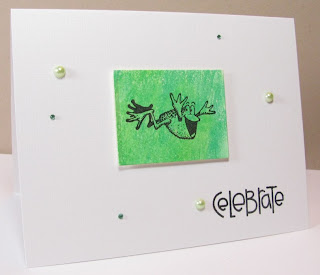 Yes, I think that bling was a stoopid idea. Too late. And another close-up of our green friend: 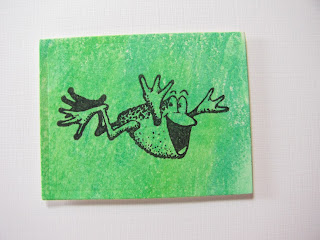 I'm off to post this to my Splitcoast gallery. You should come play! Use keyword SCSFBLY2012 if you do!

Thanks for stopping by!
Posted by Leslie Hanna at 8:05 PM