I spied the new OWH sketch challenge this morning and set it aside with big plans to use up some more patterned paper. Then things kinda got out of control.  First, here's the sketch: 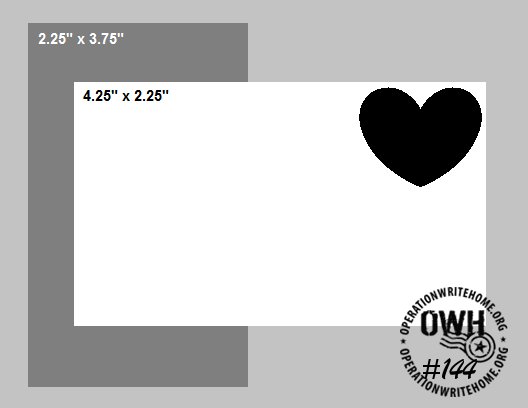 Do you see the possibilities? :) So I went rummaging in my Basic Grey collection of 6x6 pads, and I found one that looked untouched, so it was today's victim. It was undoubtedly the result of my OMG, PLEASE ORDER ME ONE OF EACH BASIC GREY 6x6 PAD THEY MAKE FOREVER UNTIL I TELL YOU TO STOP era. Yeah, when you do that you sometimes get things you don't like. I finally did give it up, which is why I'm working through them now.

So ANYway, today's paper pad was Curio, and it is now mostly gone. Here's one of the cards I made: 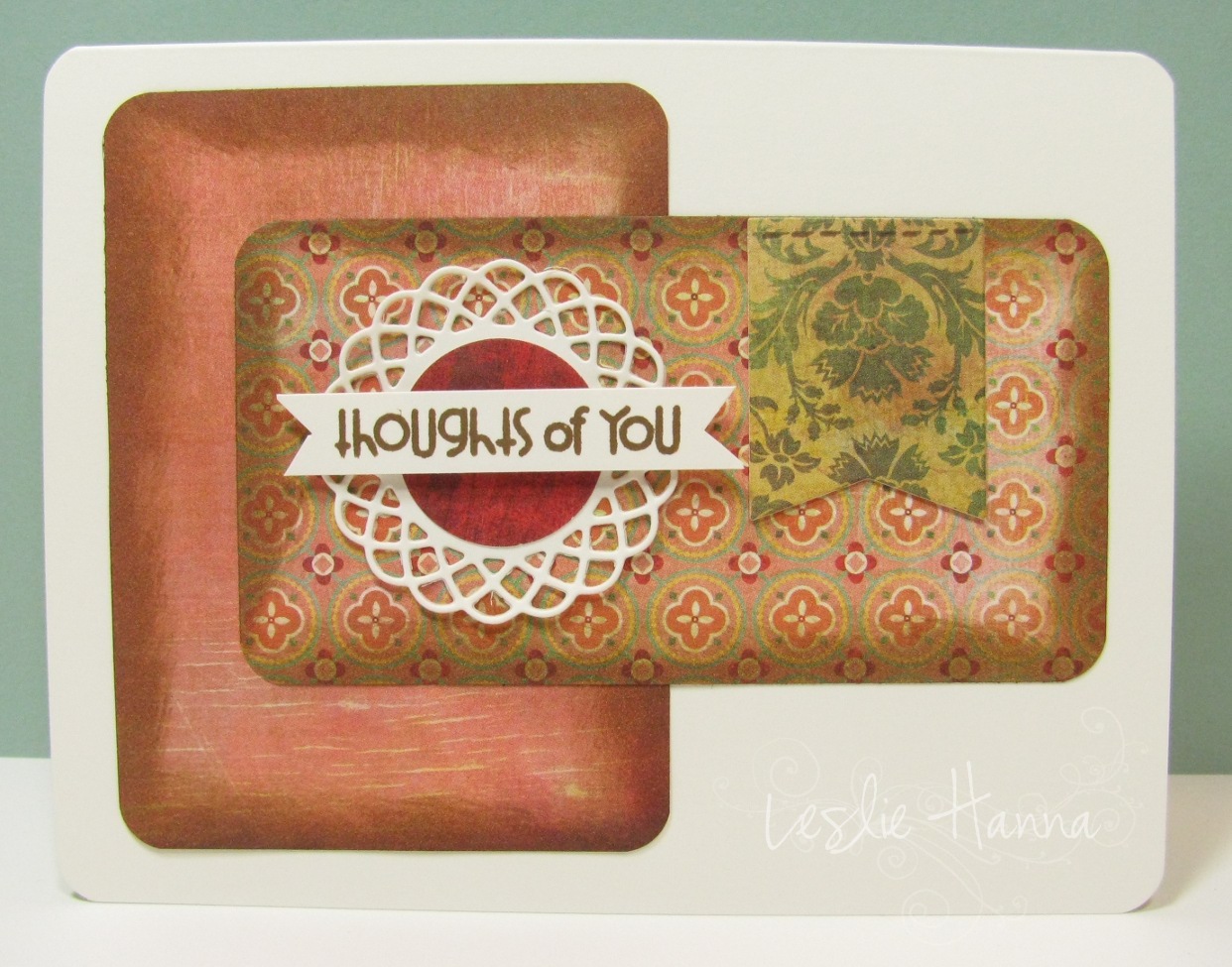 Here's how I approached this effort. First, I pulled out papers in pairs I thought would coordinate for the two main panels. I ended up with five different pairs, two of each pattern, so let's say that was 20 of the 36 pages in the paper pack. Not bad, not bad.

I cut all the pieces according the the awesome measurements provided with the sketch, but I messed up and made the bottom layer wider, which I decided I liked, especially since I'd have less paper left over. Layers. It needed layers. Now if you're with me on the numbers here, that's enough parts-is-parts for 20 cards x 2 pieces of patterned paper for each card = 40 layers. Add in the fact that I had 10 different paper patterns and colors, and that's when my head exploded. I opted to make fake layers, which means I distressed the edges of each of those papers to give it some contrast. It's uneven, and not perfect, and now that I look at it, that pink piece above resembles a light switch plate, but I'm okay with that.

Here's another card, then I'll continue my tale: 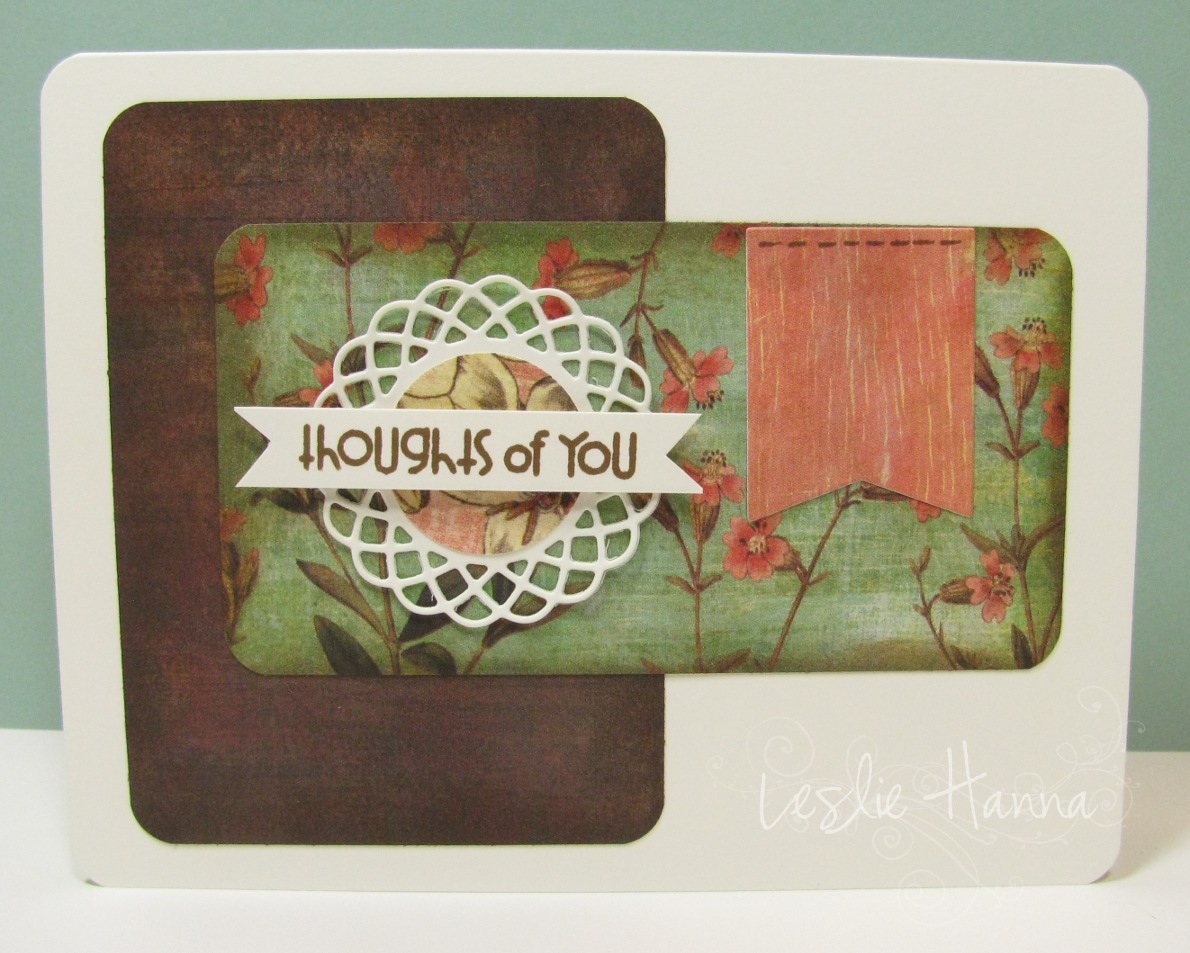 Next I needed something for the heart element in the sketch, so I had lunch. After a while I decided it needed to be a banner part, so let's do some more math. This is a 6x6 paper pad, and every piece was cut into tiny parts, leaving long strips of patterned papers at least 1" wide. So for all 10 patterns, I had remnants I could use for the banners, and I started mixing and matching until I'd cut 20 banners. I had no idea what the next step would be, so of course I attached the banners and added the faux stitching.

Humor me for a moment and place your hand over that doily part. It took me hours to get to that point, so I wanted you to see the card without circle or sentiment. Yawner, right? Then I had a snack.

I cheated and looked at the other cards posted at OWH to see how they handled the sentiment, but none of them I saw at that time had taken my approach with the sketch, so I was outta luck there. Finally, in an effort to make this day end, I opted for something round, and chose the mini doily die with the least number of things to punch out, and I cut 20 of them. (Use the steel plate - it helps.) 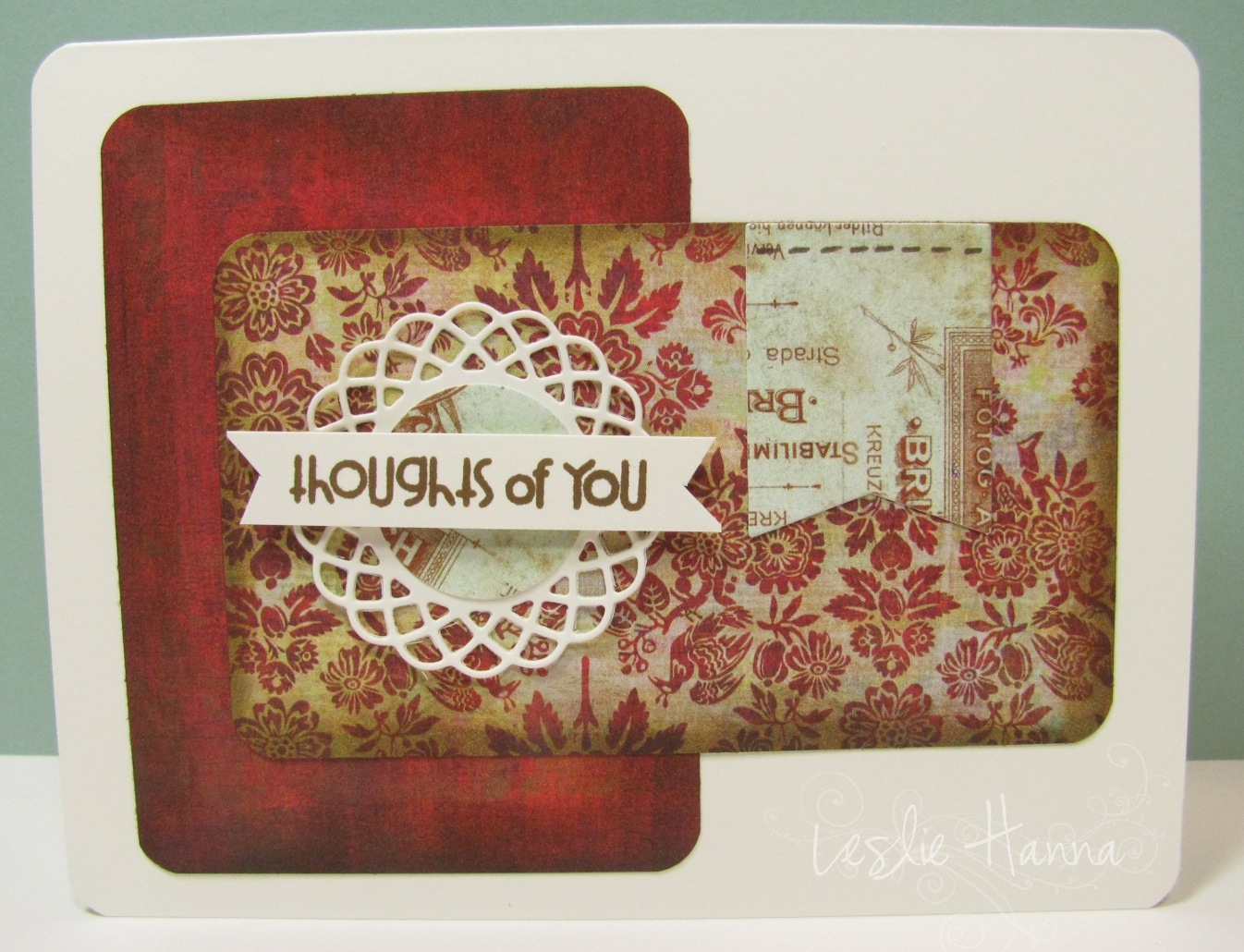 Now I had cream colored doilies and still no sentiment. If you'll recall the cards I posted earlier today, I used a small round sentiment in the center of the doilies. Meh, been there, done that. So instead I took more of the cut-offs and punched out coordinating 1" circles for the centers of the doilies. Some of them match their banners, but most do not.

I still had no sentiment, so I had dinner. 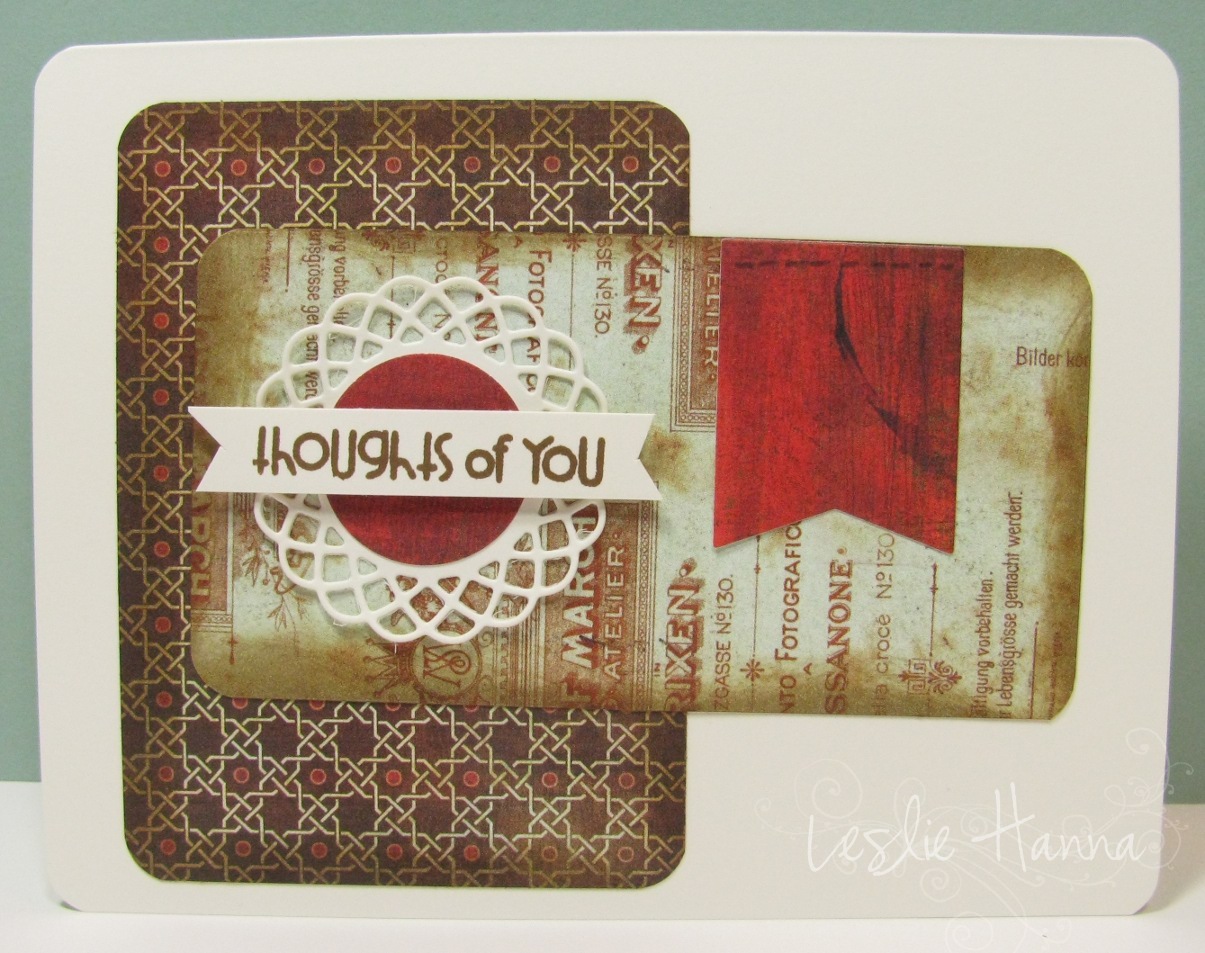 I've also noticed that most of them are crooked. Sigh.

So I rummaged through my sentiments until I figured out I don't need no stinkin' round sentiment. Who said it has to stay inside that circle? So now I had way more options, and decided to use that Paper Smooches sentiment. I measured it and found I needed to cut 3/8" strips of card stock. Twenty of them.

I cut, then I stamped. Then I started notching the edges and I had to sit down. FINALLY, I attached each of them to their circles with tiny squares of dimensional adhesives. FINISHED. I WAS FINALLY FINISHED.

Here's the last one, and it may be my favorite: 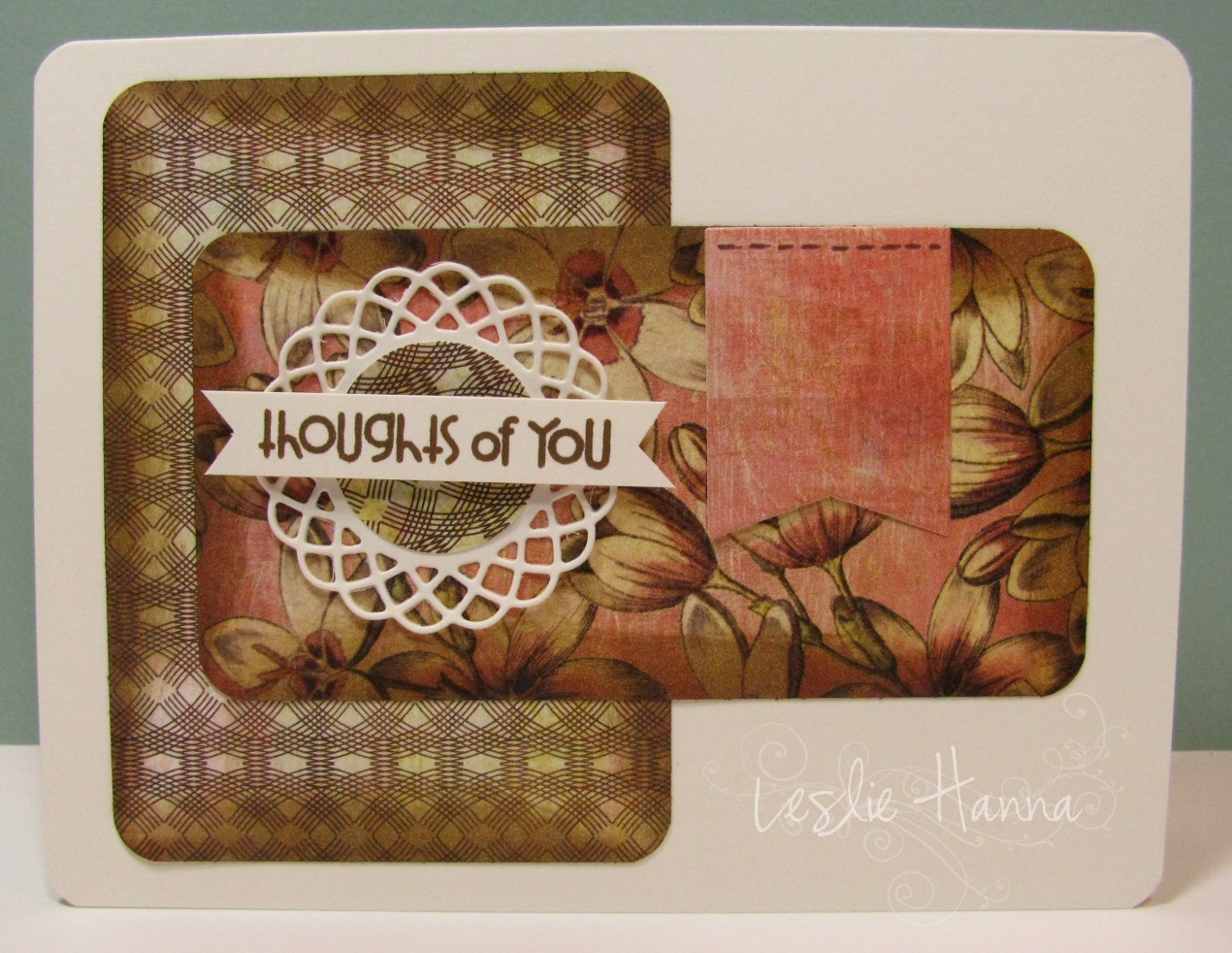 So there you have my whiny tale of mass production. BUT, I did disappear most of an unloved pad of paper, and I'm so excited about that, I might make something this week to use up all the remaining parts plus the few whole sheets I didn't use.

The winner here is OWH, who will get at least 15 of these 20 cards. I might hold out 1 of each for my dying Etsy store. I need to pump some life back onto that place.

In other news, Sandy is very close. The rain has started. All mass transit in the area has been closed for tomorrow. The schools are closed Mon & Tues, and the Federal Government has also closed, as well as local governments. This means it will be clear sailing to the office tomorrow (no traffic) and I pray they grant us early dismissal. It's supposed to be bad late tomorrow afternoon, and I'd rather be hunkered down here at home than at the office. Just sayin'.