Yesterday I took some time to stamp the backs of the cards I've made for OWH, stuff them into envelopes, and pray that I filled a flat-rate box. Nope, it was only half full. Even though I raided my cache of Mother's Day and Father's Day cards (they were in the same box), I still couldn't fill that flat-rate box. This meant today was going to be spent in mass-production mode.

I'm not in love with mass production, but I saw this as an opportunity to disappear some of my 6x6 pads that were mostly small remnants and not a lot of full pages. I found 3 or 4 packs that fit this description.

Next, I needed a sketch. I checked out the list of OWH sketches, looking for one that screamed scraps, and settled on this one: 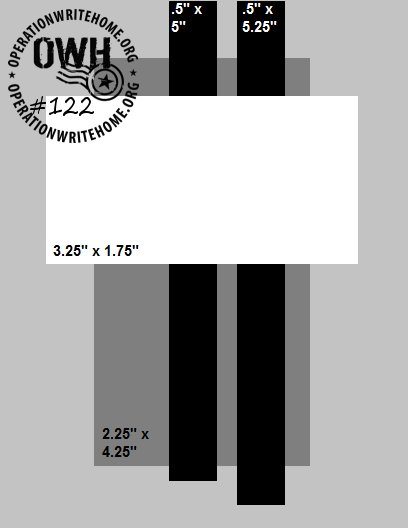 I don't know about you, but I have mostly 1"- and 2"-wide scraps when I use 6x6 paper, so I saw the 2" pieces as the back rectangle (I don't often use the stated dimensions, though a lot of OWH-ers do), I saw the 1" pieces cut in half as the vertical strips, and I'd stamp a sentiment on white for the top rectangle. I went to work and made 18 cards, and all that's left in that paper pack are 4 or 5 sheets of wood-grain patterns, which may come in handy one day.

Oh, do you want to see a few of the cards? Here's one: 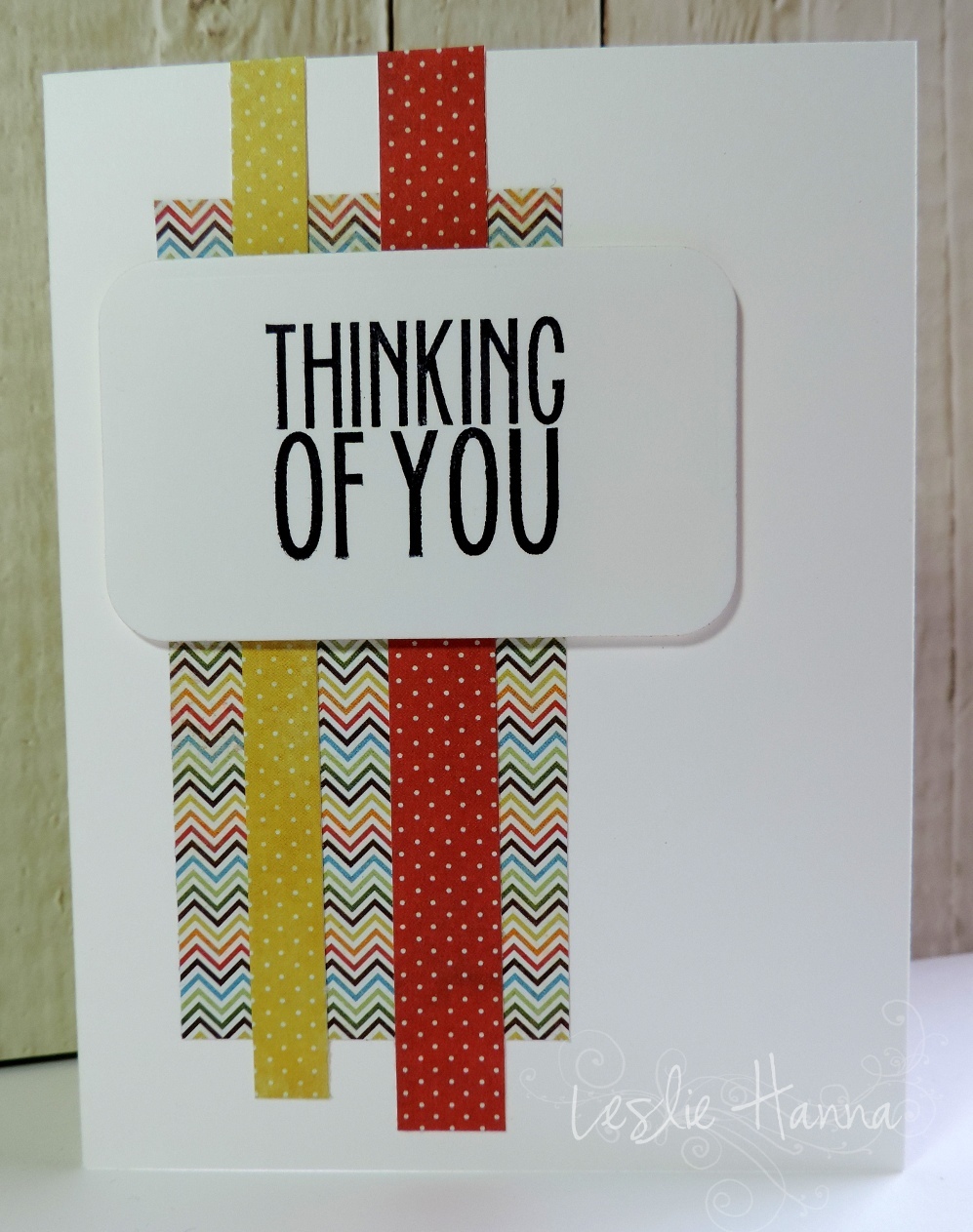 The more I look at these, the more I think I should have trimmed the bottoms of the vertical strips on an angle. I actually tried, but I used a good adhesive, so I couldn't pull up the ends to trim them. :( 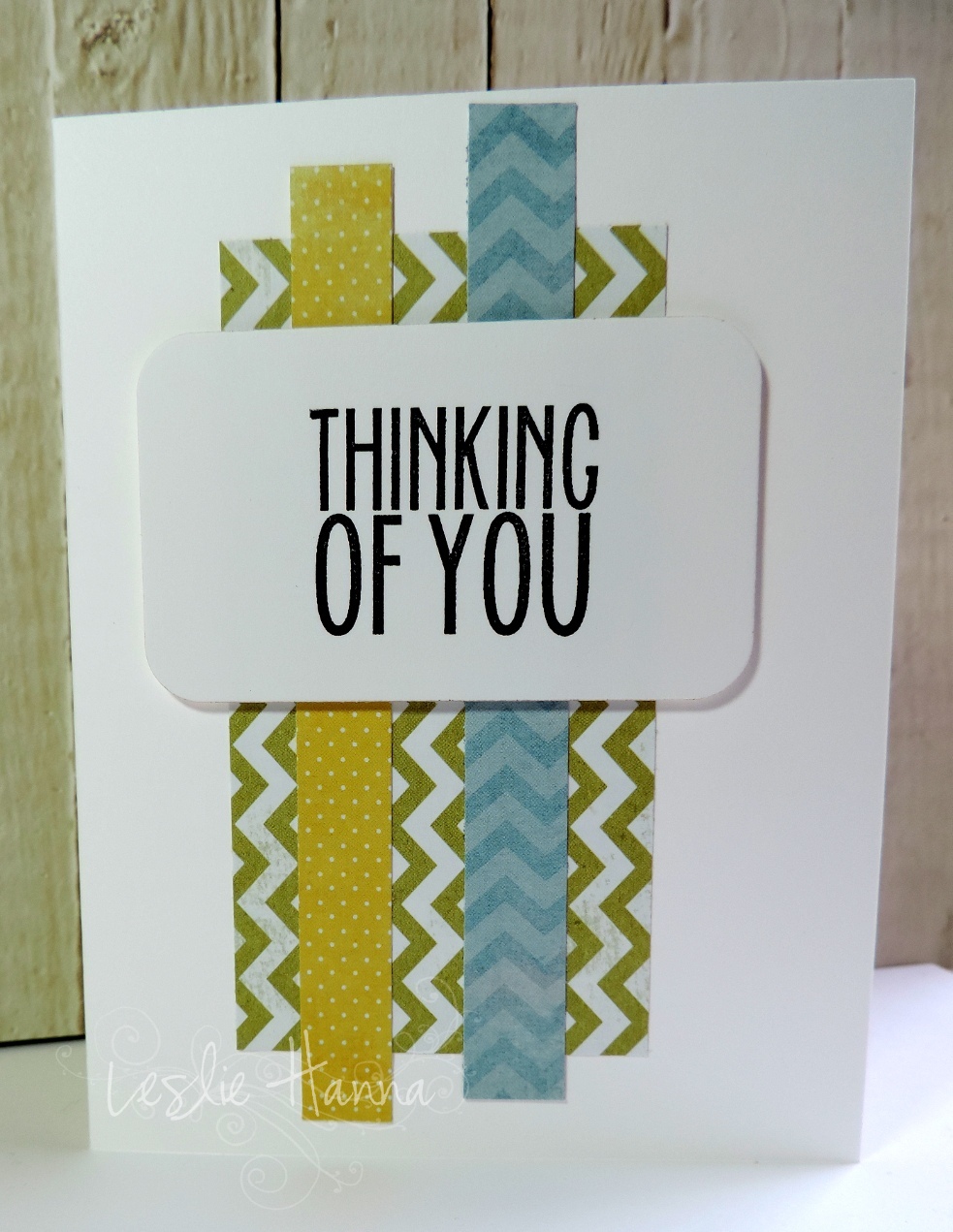 For this one the strips of paper weren't long enough, so I didn't have them go up to the top of the card base. I'm also pretty sure I broke several design rules by putting two chevron patterns together, but it's all I had left! Please don't shun me.

And the last one of that batch: 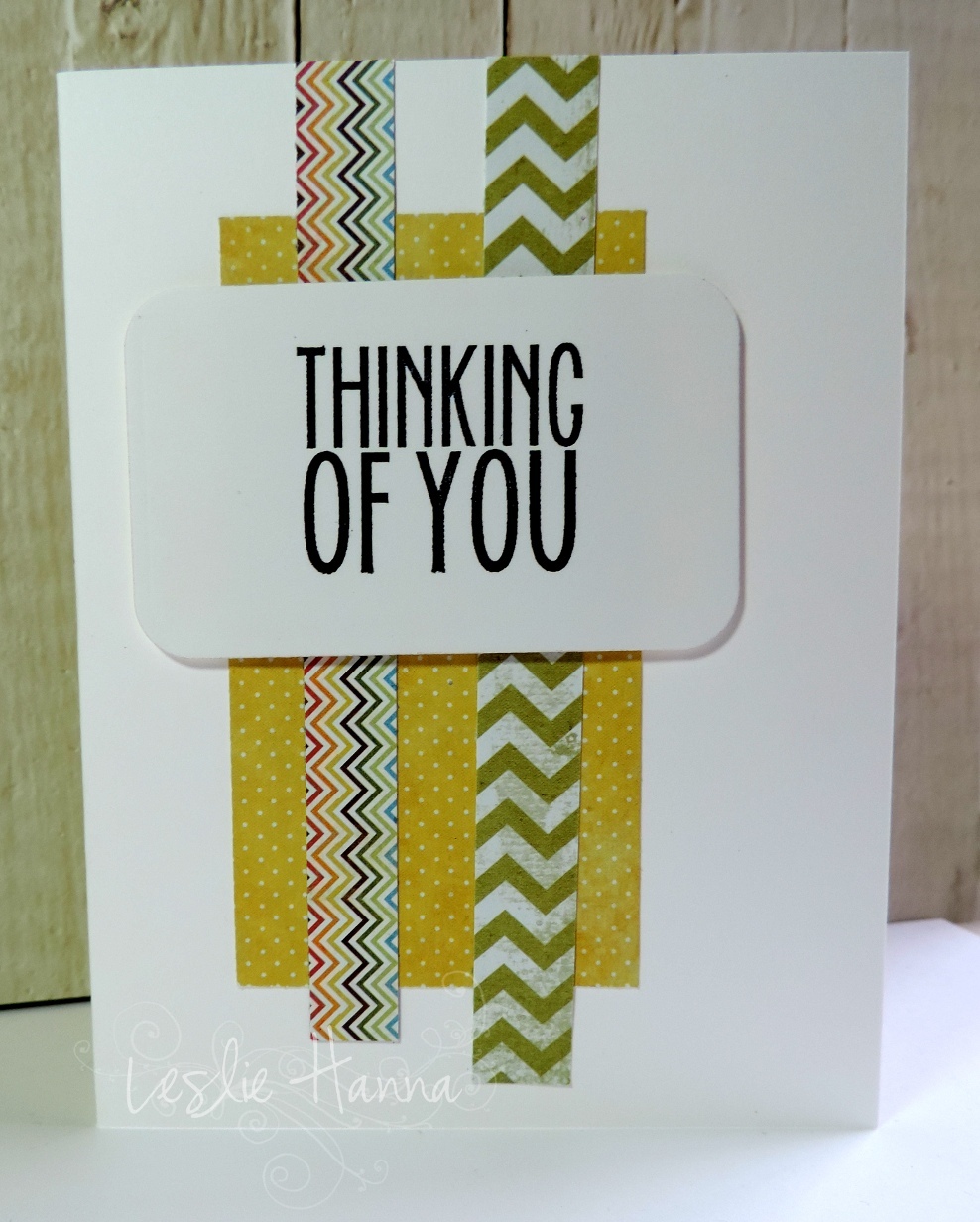 Then I moved on to another 6x6 paper pack, and the current sketch from CAS(E) This Sketch!: 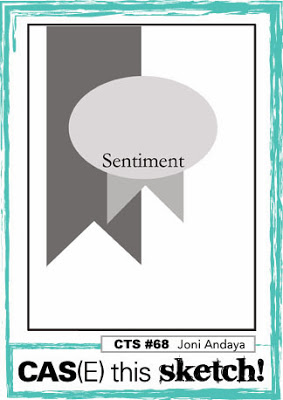 This looked perfect for using more of those 2" strips, and parts of some of the smaller pieces. Here's one of the cards I made: 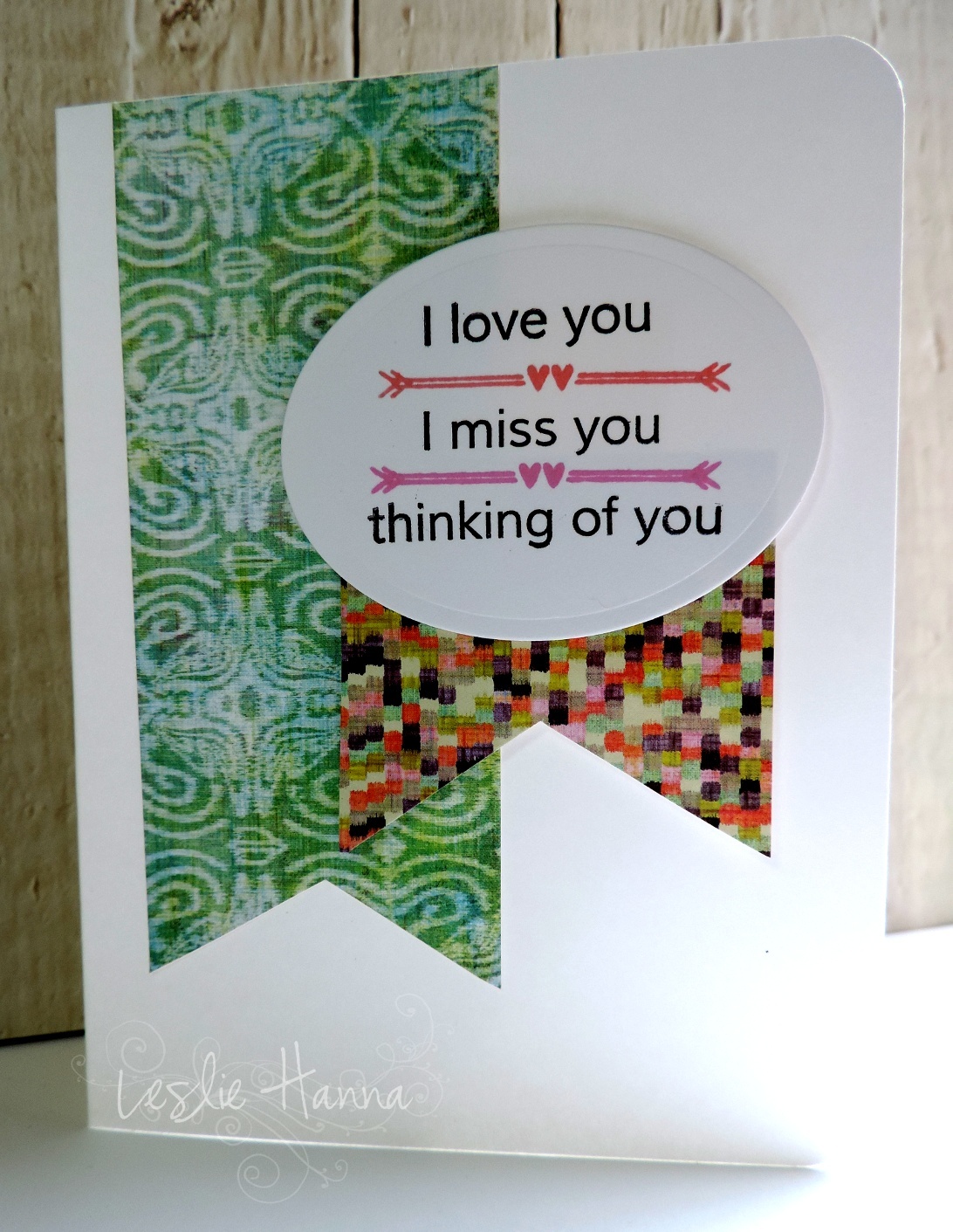 So I had this idea ... I thought it would be fun to stack sentiments. I mean, if someone overseas is missing his or her love, they are also thinking about them, right? So Love You, Miss You, Thinking of You logically (in my mind, anyway) need to be together.

I took three sentiments from a Clearly Besotted set (linked below) and stacked them. I left room for a divider, and added the arrow from a Simon Says Stamp set between the words using two different colors of ink. 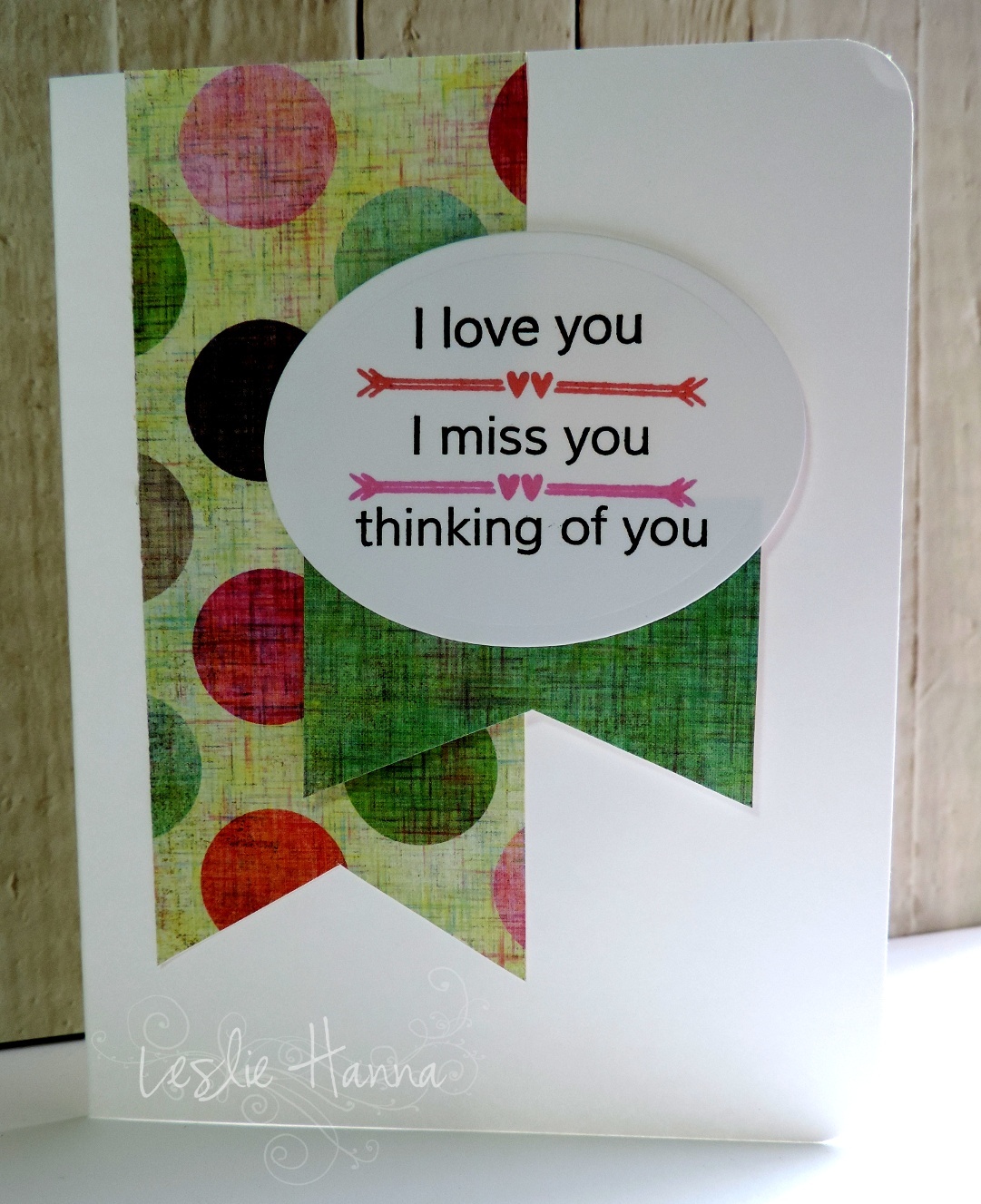 I like how this green cuts all the (gah) pink in the paper pack. 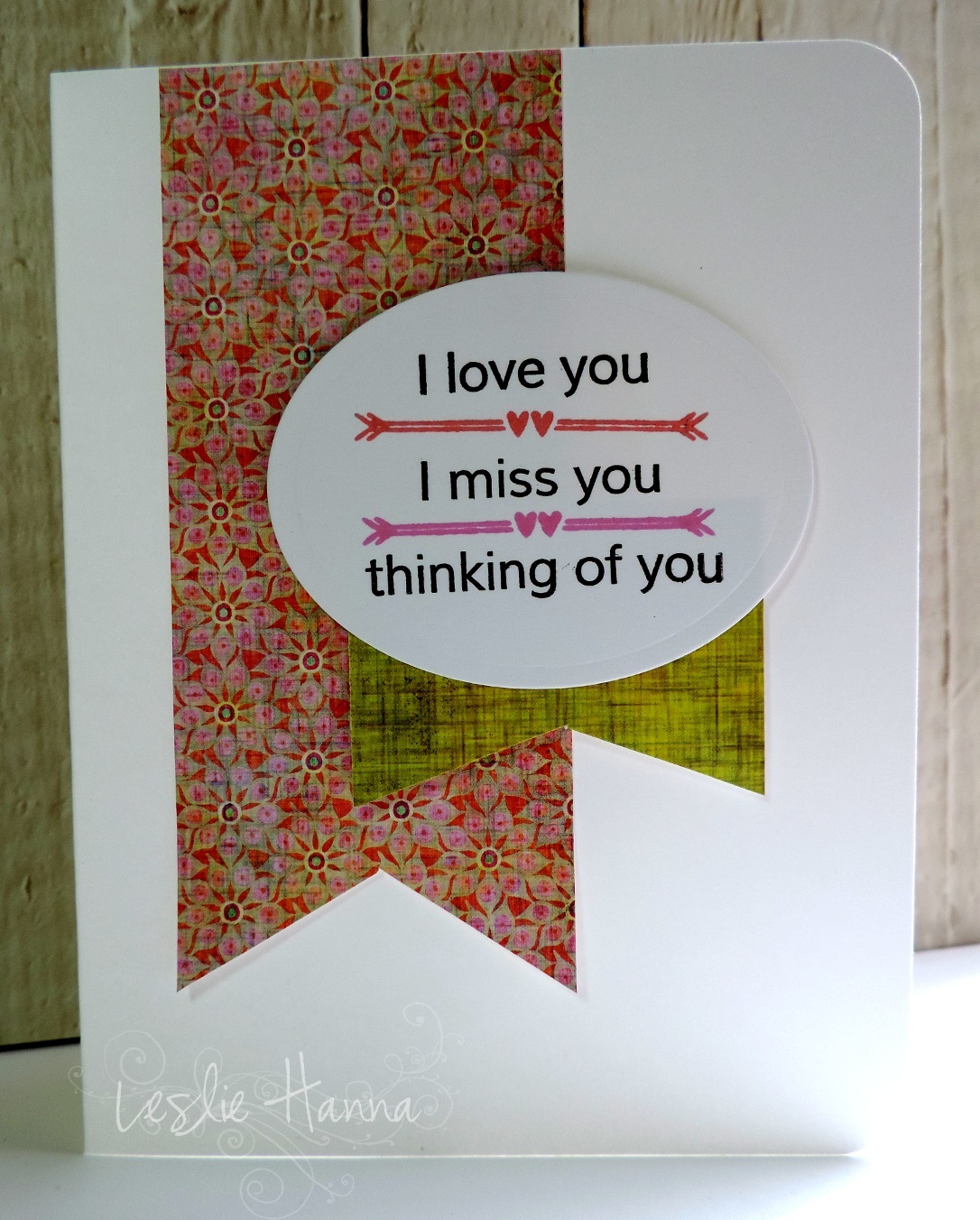 In other news, I suspect I'll lose my OWH fan badge when they see these cards arrive. They like Miss You, Love You, and Thinking of You cards, and they like the cards in the boxes to be grouped by sentiment for easier processing. I plan to put these cards in a section called "These Defy Categorization" and see what happens. I'll probably be called out as an example of what not to do. I can live with that.