Market Update (and some local history) 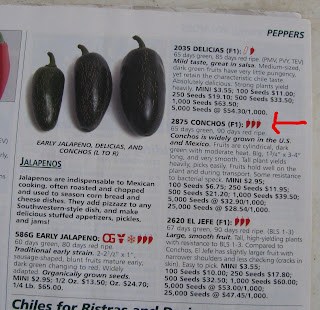 Out comes the seed catalog. See those little red pepper symbols? See that red arrow I drew? Yeah, that's his peppers, and they have 3 (THREE) peppers filled in. So since I brought the remaining pepper poppers with me, I offered him one, he ate it, and stared at me. Not hot. What's my problem.

One of Farmer Mike's customers tried one, and she said they were OKAY, but she prefers to make that recipe with Habaneros. I sulked away.

I finally did get one of the other guys to eat some and take the rest of them home. Sigh. 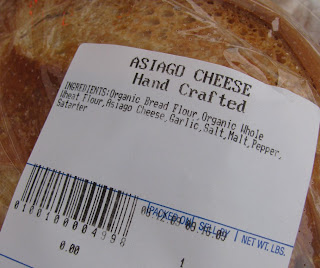 Here is my loaf of Asiago Cheese bread. Oh, my goodness, this stuff is good. They only make it on the weekends, and today they only brought two loaves. One was promised, and this one became mine. Sweet! 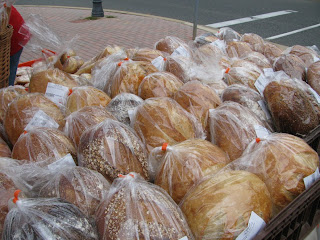 Here are the rest of the bread loaves. They sometimes run out and have to go back to the bakery for more. 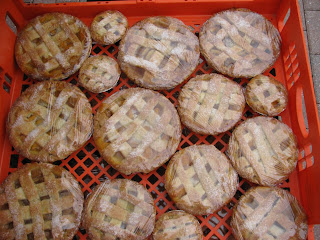 Lotsa pies. These were also mostly gone by the end of the day. 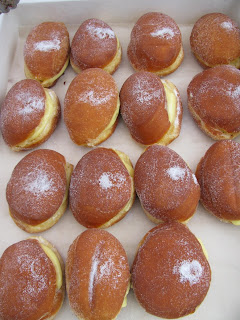 And the Boston Creme Donuts. That fat one on the bottom right came home with me. It was dinner. More on that in a sec. 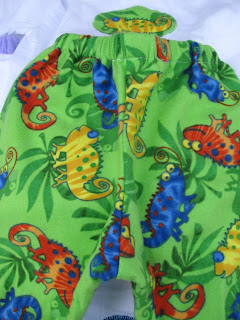 Look at these stinking cute baby pants that MaryBeth made! 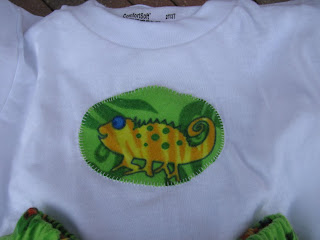 This is the matching T-shirt...it's a set. I bought these for our photographer vendor who just became a Grandpa a few weeks ago. Okay, not for HIM, but for him to give to his daughter for the baby. 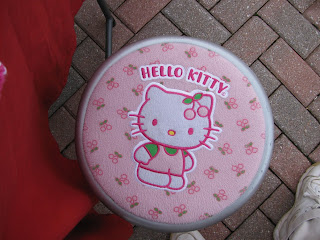 I never heard about Hello Kitty - wrong generation and I had boys, so I missed it completely. But for you Hello Kitty fans, this is one of MaryBeth's chairs (and my shoes ... nice). 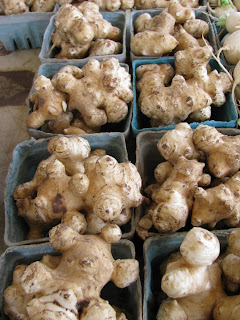 We have a new vendor - been here for a couple of weeks. They sell mostly herbs, both dried and fresh, and spices. And jams.
This stuff is Jerusalem Artichokes. Never heard of it, so I tried a bite. Not a lot of taste, but it was still kind of fresh-tasting. He said you cut it small and put it in salads and it takes on the flavor of whatever you put with it. I thought it looked like ginger root, but it is not even close. 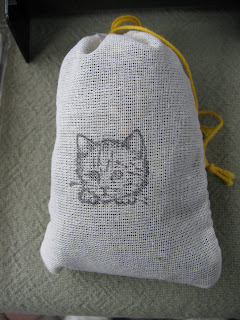 I got this for kitty: fresh catnip. Or not. She ignored it. Hmph. 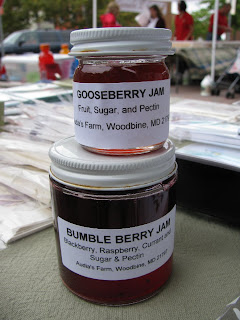 And I got these for myself. 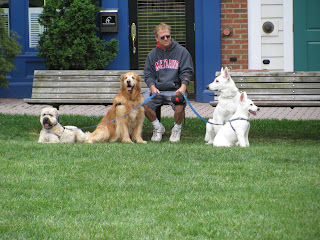 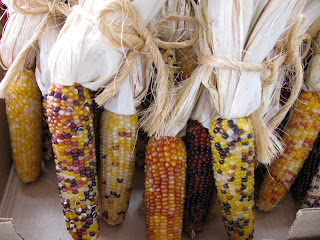 Popping corn on the cob. You put this stuff in a brown lunch-type bag in the microwave and it pops. It is all about the water content in the kernels. I saw that on the Food Network, so it must be true. (I no longer get the food network, because I cancelled my cable. No TV for me.) 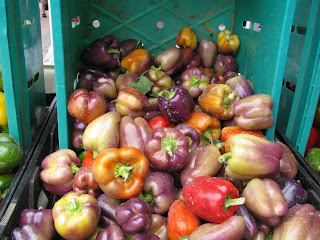 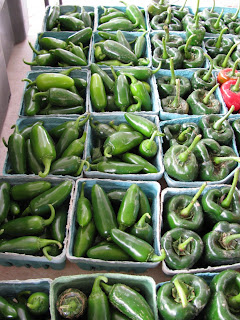 Jalepenos and poblanos. I've learned my lesson, and I bought NONE of these. 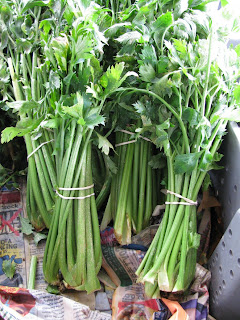 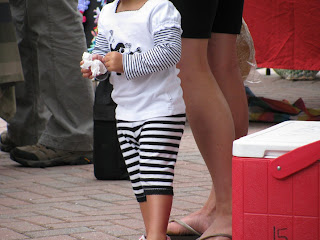 Our Fashion Statement Du Jour. Isn't this a cute outfit?! 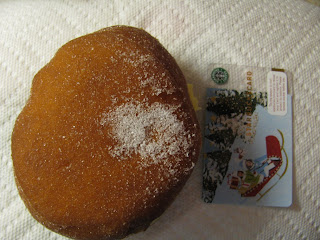 Okay, back to the donut. I tried to take its pic to give you a sense of size. This view with the sbx card is not helping much ...

... but here you can see how thick this baby is. Look at all that creme trying to sneak out. It was dinner, and yes, it was as good as it looks. 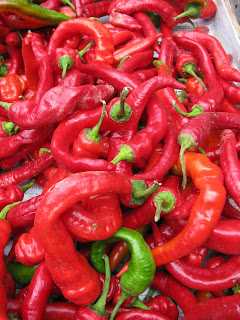 Here are some more peppers. So colorful. I am going to miss these guys as the season winds to a close. 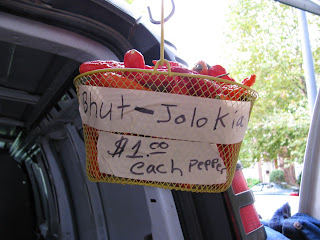 These are Farmer Mike's "special" peppers. He has them up in that basket so unsuspecting people do not touch them. They are that hot. 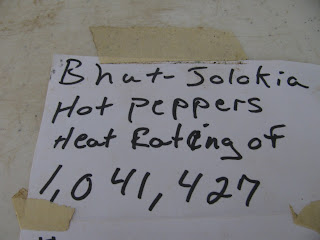 See? He broke one open so we could smell them (well, probably so his CUSTOMERS could smell them, but we got in on that action ... have I told you yet it was a slow day?) Man, just SMELLING that pepper cleared my sinuses. Yes, he sells some. 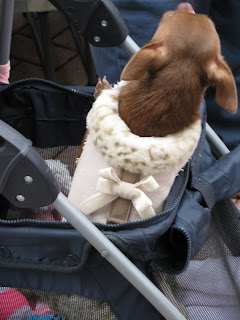 This is Brownie, one of our regulars, with her own stroller. Today her Mom put a fleece coat on her to keep her warm. Her Mom said Brownie does not like getting dressed up too much, but it was chilly this morning, so she is wearing the coat. So cute! 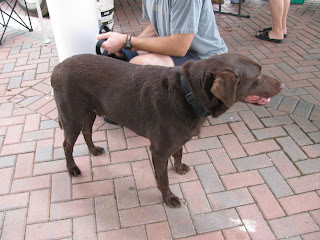 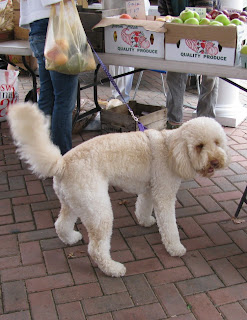 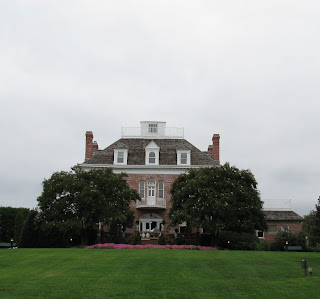 This is the Kentlands Mansion. In case you were wondering how The Kentlands got its name and came into being, I'll tell you (I promise, I'll try to keep it short.) A family named Tschiffaley used to own 700 acres. They gave 350 acres to the National Geographic Society that occupied the property until a few years ago. The other 350 acres were eventually sold to (or inherited by) the Kent family; this was the house/mansion that belonged to them. When the property was sold for development (put a knife in my heart!), the mansion and adjoining buildings were kept and converted into an Arts Barn, a theater, and several other buildings were re-purposed. The mansion can be rented for events.

See that wing to the right? Either Mr Tschiffaley or Mr Kent (I forget which) had an oriental rug that was too big for any existing room the house, so he built that wing to hold it. It's true. I took a tour years ago and they told me.

Enough about that. My workshops are tomorrow - 2 sessions, and Monday evening, so I needed to make up my kits and execute the Clean Sweep. I used my new setup in The Other Room for all the cutting, and you know what? Those cabinets are the perfect height for doing mass quantities of cutting. My back did not hurt at all. Yay! 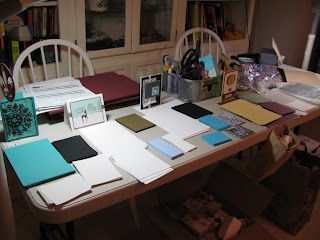 Here is the assembly line for the four cards we are making. My back about went OUT putting these things together. I am convinced this table is too low for this type of work. 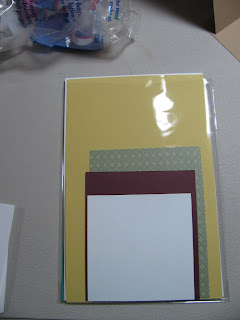 This is an assembled kit - all the card stock needed to make the four cards.

So the kits are made, the Clean Sweep has been done, stations are all set, and I need some sleep. In the morning I get to clear off the Kitchen table (aka: the shopping area), clean the bathroom, update the Frequent Shopper cards - you know, my usual Sunday-before-people-get-here stuff. I should be done with the workshops by 5 pm or so, and I'll be sure to sit down and put my feet up for a spell. Or do laundry. I'll let you know what I decide tomorrow.

Thanks for stopping by!
Posted by Leslie Hanna at 9:33 PM