Tonight I'd just like to say that I am still on the planet, and still stampin', but geez, I just wish something would actually come out like I'd hoped it would! Sigh.

I'll begin with a photo that will not hurt your eyes. You have been warned. 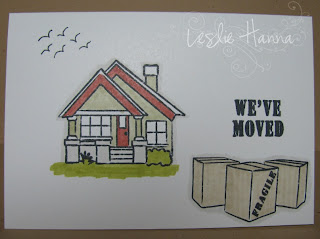 I am just playing here with a new set from Clear Stamps called "Just Moved". I LOVELOVELOVE this house, so the set came home with me from my last trip to Angela's. I thought I'd color it like a house I'd like to have - a putty color with rust and olive accents. And this one even has a porch! It actually strongly resembles the first house I owned.

Okay, now go get some shades, or else prepare for some really glaringly bad pics. Remember I told you I came into some 12" mirror tiles, and I planned to put a few of them on my striped wall? Well, my stencil arrived yesterday, so I played around with it last night. In Twitter terms I'd give it a #FAIL. But it was a good first try. Let's see what the heck she is rambling on about, shall we? 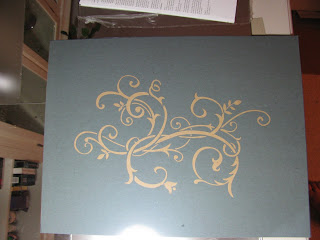 Here is the Flourish stencil from SU. I had this idea that I'd put it across the seam where four tiles meet, then hang the tiles with some space between them. 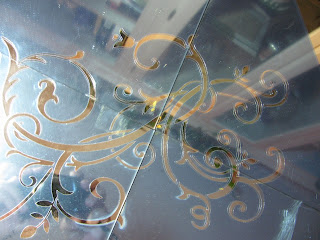 Here is the blue-ish stencil laid out across the four tiles. You can see where it spans the four corners. You can also see my hands holding the camera, and the cabinet behind the table. Funny thing about mirror tiles - they reflect. Please try to see past that. 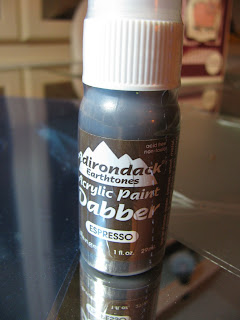 Here is the paint I bought to use. I really wanted a charcoal grey, but there was none in the store, so I got a dark brown. 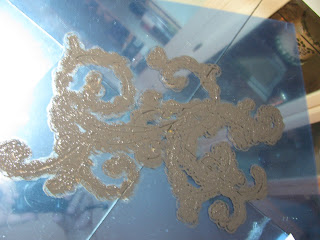 Here we have the stencil all painted up. It looks pretty bad, but the paint slops over the cut-out, so I had hope. 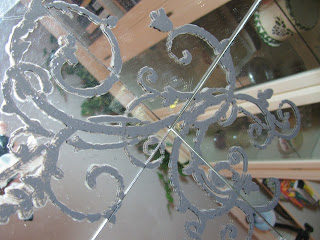 I was wrong. This is just after I'd pulled off the stencil. Blech. I think I need to anchor the tiny parts of the cut-out a little better so the wet paint does not squish under so much and make a mess. Can you tell this is my first time ever with a stencil, not counting the plastic kids' ones, that is. 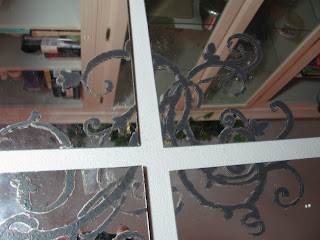 For grins, I pulled the tiles apart to see how it would look. Eh? Not horrible, but it could be a LOT better than this!
So you see, I have been playing around, but not accomplishing very much. Though I did have a massaaaaage this evening. Mmmm.
Hopefully I'll get a clue and have a real card to show you tomorrow. Thanks for stopping by!
Posted by Leslie Hanna at 8:33 PM