Thank You, Thank You

This evening I bring you two versions of the same thank you card. (Two versions ... thank you, thank you ... get it?) Ahem.

A week or so ago, or maybe more, I cut a piece of white scrap with the SU 'Thanks' Embosslit Die, then stuck it onto a raised-edge note card. White-on-white. Kinda neat. So tonight's task was to try it with Vanilla.

When SU retired the raised-edge note cards, I hoarded - BIG TIME. I've also been going through some of my hoarded 12x12 papers and re-discovered two pieces of a FABulous print (natch!) The wheels started to turn, and voila: the following two cards were born. 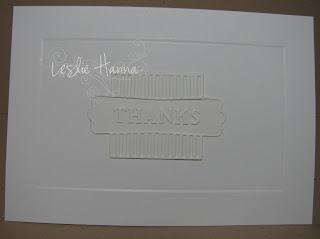 This first one is Very Vanilla on the Vanilla raised-edge note cards.

A little back story about the hoarding. When these were first announced as retiring items, I bought 20 packs (at least), then went in search of another source. I found some online, but I thought how much better it would be if I could make them myself out of SU's plain note cards, which we still sell. BR#2 and I spent many evenings conversing about how one would go about embossing just the center of a note card. Just like with cardigans*, I was waaaay ahead of my time. Someone heard my prayers and invented Nestabilities! Yes, you may thank me now. :-) 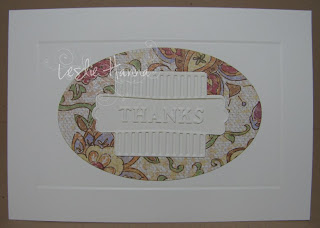 This version is the result of an afterthought involving the aforementioned pretty paper. (Hmm, I just used afterthought and aforementioned in the same sentence.) I had tried cutting out the die shape in the patterned paper, and I did not like it much. My original thought was to cut it out of the pretty paper, then cut it again out of the vanilla and piece the vanilla center over the pattern. Not lovin' it. BUT - I had the die-cut-shaped HOLE. I used one of my Nestabilities Petite Oval dies and cut it out, then nestled the vanilla die-cut in the hole. GENIUS, I tell you, pure GENIUS! It is flat, and a perfect fit - no alignment issues! Now THAT is an idea I can embrace!

Tonight I made five of each. I might make some more to finish up the pack of 20 cards, then move on to my next project. So whatdya think? I could switch up the papers - maybe some holiday paper for my 3 Holiday craft shows this season? Hmmm?


*Years ago, I wanted a cardigan sweater, but they were nowhere to be found. When I'd ask at a store, people looked at me like I was crazy. Finally I found one - ONE - at a ridiculous price, I might add. Then all of a sudden, like within a year, they.were.everywhere.
Posted by Leslie Hanna at 7:32 PM