In our last episode, Shannon was worried Gayle would find out that she'd slept with Henry, but what Shannon did not know, was Gayle was sleeping with Conrad, who was cheating on both of them with Richard. Yes, Conrad is a closet homosexual, but no one but Richard knows. And Conrad, of course. Also, Shannon and Gayle are actually twin sisters, and both pregnant by the other's boyfriend. And NO ONE knows that Conrad and Henry are actually father and son, except Conrad's Aunt Millie, who is really Henry's sister, who had an affair with Joe, who used to be married to Carol, who is best friends with ...

Oh, wait, wrong show. This is the Cool Branches show ... right ... sorry about that. I watched about 5 minutes of a soap opera last week and it blew my mind how so many people could 'forget' they had children. Stoopid, so I turned it off and remembered why I do not watch TV, especially in the daytime.

ANYway, when I posted my Cool Branches blog entry, someone suggested the trees would look really great embossed, like Gold on Gold, or Silver on Silver, or White on White, so since I am constantly looking for ideas and blog fodder, and I really did not want to fold any more laundry tonight, I went with it. 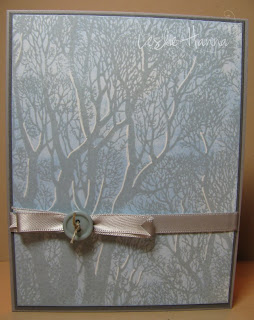 I really liked the white accents on the branches. This one was stamped on white and blue was brayered over it. The ribbon is silver, even though you cannot tell from this picture.

Then I tried White on White: 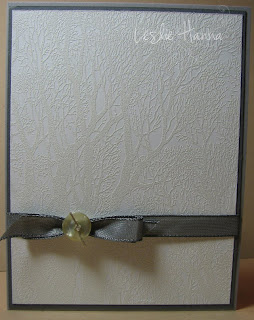 Niiiice. I layered it with the same Basic Gray on a Going Grey card base that I used in the original card. I used Basic Gray taffeta ribbon on this one, though. And no white gel pen, because, well, it was alreay white on white, ya know?

Then we have some glaring-bad photography. What can I say? The embossed gold and silver were so shiny, I could not get the light at a decent angle. Sadly, these are the best I could do. There is also no white gel pen on these, because I forgot.

Here is Gold on Gold: 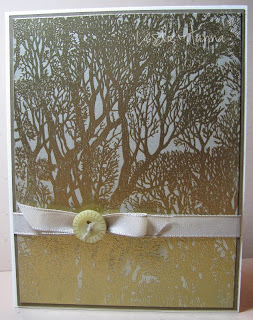 I layered the gold onto some Soft Suede, then on a Vanilla base. The ribbon is Kraft taffeta.

Next up we have Silver on Silver: 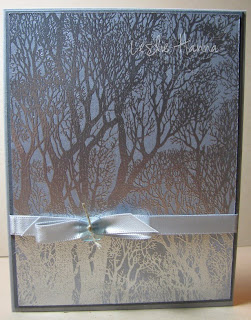 This one is layered on Basic Gray on a Going Grey card base, and uses the same silver ribbon as the original.

Do you think the Gold on Gold and Silver on Silver need some white accents?

Lastly we have another White on White, and I brayered some blue over it for the sky. I am not so sure I like it. 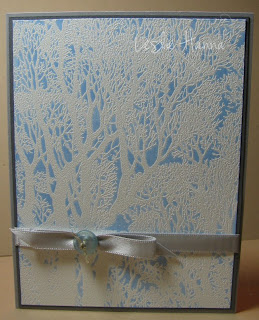 What do you think? Eh? Maybe? I think I like them all but this last one. What do YOU think? Please let me know!

That's all I have for this evening. Unfortunately I really must fold some laundry now so I can go to work in the morning.

Thanks for stopping by!
Posted by Leslie Hanna at 9:32 PM