Yes, I bring you more trees. At least this time I employed a different technique, and I tried to do it all SU. I FAILED, but that does not mean that I did not TRY.

These are inspired by yesterday's sunset. The sky was mostly a deep blue, but down at the horizon it was a lighter blue with pink and orange mixed in. Just lovely. Of course, I failed to capture the colors on my phone's camera while standing in the parking lot of the post office, but still, again, I tried. 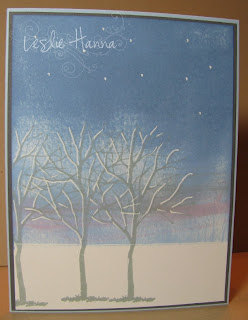 I used the direct-to-paper technique with my SU ink pads. (I actually threw away the first 4 to 5 attempts ... such is my sacrifice for my art; so I guess this is really pass #6, but I digress. ) I started with Bashful Blue and schmeared it all around the top 3/4 or so of the card stock, leaving some un-inked spots on purpose to make it look more realistic. Then I swiped Pretty In Pink and a little Going Grey near the horizon. Then I went over the top part of the card stock with Brocade Blue - pretty much my go-to blue these days. I soaked it reeeeeal good, too. Even had to change the grid paper it was such a mess. Using a scrap of printer paper to make a distinct line near the bottom of the color, I went back over everything with the Bashful Blue.

I was going to stamp the tree in Basic Gray, but then I had a horrible thought: This stamp set retires effective January 4th, and my classes are not until the following weekend. You know what this means, right? It means I cannot use this stamp in my classes! ACK! All restrictions being off, I used Memento London Fog ink instead of SU Basic Gray. I am such a rebel.

I went over the stamped trees with my white gel pen, and then, in a fit of creativity, I poked in a few stars in the clear night sky.

I liiiike! And did you notice something strange? No ribbon. None. And I am okay with that. This time.

So today one of my Tweeple suggested moonlit trees resplendent with hearts as a cool Valentine's Day card. This gave me the idea for this evening's project: 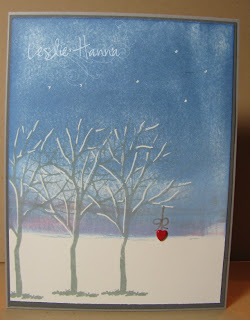 I tried to replicate the sky from last night's card, and it's close. This time, though, I added a red heart brad from my stash to one of the tree branches. Just one heart - just a touch of color. How did I get it right in the middle of the card? Before I stuck the white layer to the Basic Gray layer, I poked a hole in the white piece with my paper piercing tool, drew the silver thread (with a glitter pen) down to the hole, then I stuck the brad in. The back of the brad is totally hidden between the white and grey layers. Poke-poke with the gel pen for the stars, and Done!

In other news, I innocently planned to hit the grocery store on the way home this evening to get the ingredients for my Spinach-Artichoke dip that I said I'd bring to dinner tomorrow night, but the voice on the radio said the most feared words in these parts: Winter Storm Watch. This translates into an "oh my god i am out of bread, milk and toilet paper and i must rush to the store and buy some or we will all surly die" frenzy for the 500,000+ residents of my fair county. And they all go to whatever store *I* choose. I just wanted canned artichoke hearts and frozen spinach, but noooooooo, I had to battle the stoopid people for a parking space. I was nearly broadsided in the parking lot by someone who just had to get home before the roads became impassable. Seriously! THERE IS NOTHING FALLING FROM THE SKY, PEOPLE!

I must divulge that I was not at a real grocery store. No, I went to Target, thinking it might be better. What did I find? There was not.one.shopping.cart.in.the.entire.store. Not even the hand-carry ones. People were running in the aisles and their carts were filled with TP and diapers. The shelves were practically barren. I was scared.

The worst part? They had no frozen spinach. NONE! ACK! I thought for about 2 seconds that maybe I could go to the real grocery store for that, but then I decided it would be a suicidal decision, so I did something I have not done in about 32 years: I bought canned spinach. I DID! Please do not share this with any of my friends, because I might be banned from ever attending another dinner ever again. I will report back on if they detected my dirty little secret or not.

Okay, that's enough for this evening. I need to go bag and tag these tree cards and add them to my etsy store. If I don't get a chance to post tomorrow, Happy 2010, everyone!

Thanks for stopping by!
Posted by Leslie Hanna at 6:34 PM