I did it. I took the plunge and made an acetate card. Yep, and it was FUN! Pretty easy, too. Check it out: 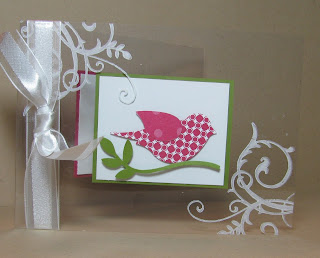 My inspiration came from this card, and I changed it up so I could use the new punch and one of the In Colors, which I have been neglecting as of late.

The trick to doing these is to put the layering behind your top layer, like on the other side of the acetate. In this case, only the bird and branch are on the front of the card. The white & olive layers are first stuck to each other, then I applied glue dots on the inside of the card front, behind the bird image so they don't show. Then I hovered the acetate front with the bird over the white & olive pieces, and when it was pretty-much centered ("pretty-much" works in my world) I stuck it down and the hidden glue dots held it in place.

You could line up the white & olive pieces on the grid paper, then line up the acetate to make sure it is straight instead of eyeballing it. I actually did that in another attempt. I make many attempts at things before I go to press. :-)

The white piece on the inside of the card (where you'd write a little note) is the same size as the olive piece, so you cannot see it when the card is closed. I guess it could be larger if you wanted an additional white frame around the olive layer. The Melon Mambo piece is attached to the outside of the back of the card, stuck on with glue dots. It frames both the inside white piece when open, and the front layers when closed. 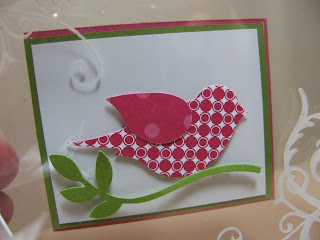 I think I'll make the Melon layer a full 1/4" larger than the white instead of the measly 1/8" I used here. That will be more forgiving with alignment challenges.

The white swirls are made with the flourish stamp from Baroque Motifs with White Staz-On ink. What I like about having the white & olive layers on the inside is you can stamp the flourish so it slops over the layer without actually stamping on the layer, if you get my drift, like in the upper left. I just love that look.

I think this will be one of my January Stamp Camp cards. One down, three to go.

Thanks for stopping by!
Posted by Leslie Hanna at 9:02 PM