Mixing It Up at Stamp Camp

Nobody likes me, everybody hates me; I'm gonna go eat worms. 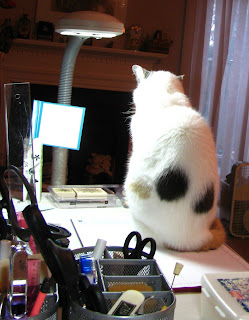 That's what popped into my head when I looked at this sad, forlorn creature, presumably warming herself under the light over the table. NOT! She spent most of the Stamp Camp time roaming from station to station, carefully stepping over open ink pads and generally getting in the way. Monday night she decided to nestle in the coats, instead. She is so neglected.

SO, my Stamp Camps went swimmingly, and everyone seemed to have a good time. My favorite part of these sessions, aside from people saying they LOVE one of the projects and cannot believe THEY made them themselves, or introducing new people to the craft (had two of them this month!), I love to see how people take my serving suggestion projects and mix 'em up!

I mean, come on, most of these are CASEd from other people to start with, and my customers are only putting their own spin on my versions of the projects. I tell them they can do anything they want with the materials provided, and I also leave out the rest of the sets that belong to the stamps we use. That not only shows them what else comes in the set (in case they like it), but it gives them options. I love how the creativity just flows.

So tonight I thought I'd show you a few examples of change-ups that were done. First, we have my version of this card: 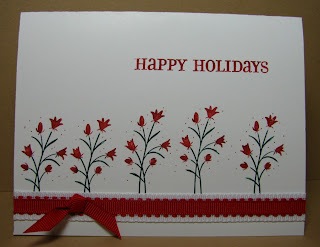 And here are a few variations: 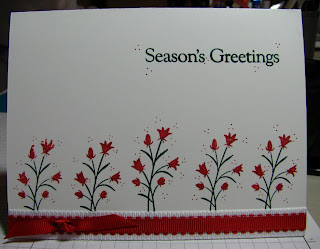 Different sentiment in a different color. She also did her random dots in more of a pattern of three, based on what I'd noted AFTER I'd done mine the messy way. She even added some dots around the green sentiment. Very nice! 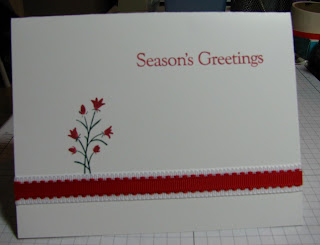 Next we have a very minimalist version with only one of the flowers stamped. And no added knot. And no dots. 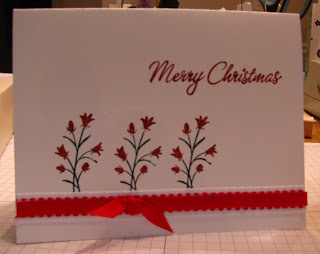 And the last example is one with only three images and yet another sentiment. I love them all!

Next we have my version of the cardinal: 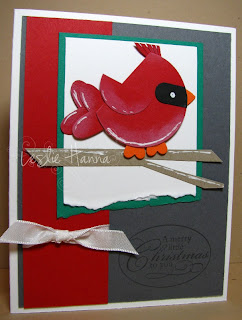 Let's see what other people did: 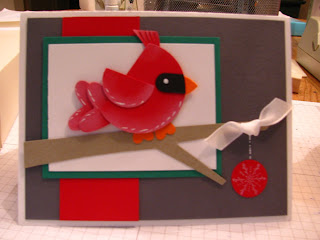 Here we have an example of what happens when someone reaches into a stamp set from another station and goes to town. The design was turned 90 degrees, and she added a snowflake as an ornament hanging from her branch. Very clever! 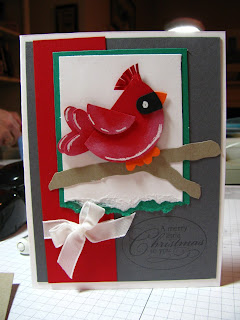 This one is included because one of the new people is crazy-good at tying the perfect bow. Just LOOK AT THAT! Also check out how she cut her branch. Soooo creative. I'm gonna have to keep an eye on this one. ;-) 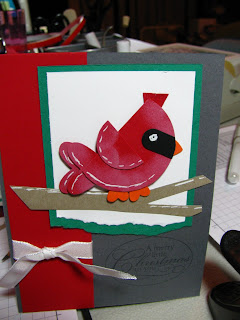 Oh, and this guy was included because of his flat-top! I think The Ladies secretly had fun cutting the hair for this guy. :-)

Back to our perfect bow-maker - look at this: 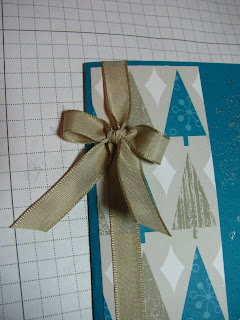 I'm telling you, she's got it! I was humbled.

That's all I have from the Stamp Camp notes. I had today off to recover from being on my feet for 2 days, and I did, well, not much at all. Had the furnace and heat pump serviced this morning, did some laundry, made a batch of buckeyes, spent an hour figuring out how to pay my VA Sales & Use taxes online, and then mostly rested. It's back to the Day Job bright and early tomorrow morning.

I hope to find time to STAMP this week so I have something new to show you.

Thanks for stopping by!
Posted by Leslie Hanna at 6:25 PM