Yesterday was my last holiday craft show of the year, and it was ... shall we say 'interesting' in so many ways. I'll try to plow through all the exhausting details with as little pain as possible to you, my beloved three (maybe four) readers.

It all started with a forecast of snow. Being from the Midwest, I laugh - LAUGH - at what is considered 'bad' weather here. So I blew it off and went about my day as planned. It all started at O'Dark Thirty when I awoke around 5 am. We could arrive and unload as early as 6 am, and I did not want to deal with bumper cars at the curb during the later hours. I got there around 6:30, and there were a few other hardy souls setting up already.

I unloaded with very little pain. Here is all my schtuff: 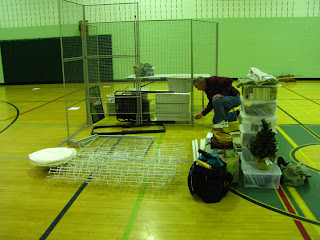 The photographer behind me had the same walls I do! (In fact, a lot of people have them.) He was pretty much done setting up his walls when I got there. Right where he is kneeling is where his wall is on an angle, which gave me a corner for my chair. You may recall seating space is something with which I struggle in my space set-up.

My space is defined by that blue tape. There is some just to the left of my walls (the round card rack bases are on my front left corner) and the guy behind me has his foot on the back corner. Speaking of which - I HAD A CORNER SPOT! Sweet. 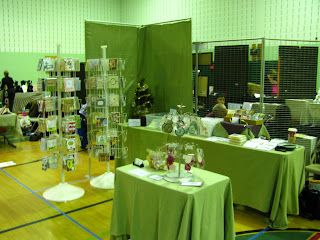 Here is my first iteration of a set-up. It changed about four times during the day, largely due to the input of my dear friend and fellow crafter, MaryBeth, who sat directly across from me and scrutinized my set-up and lack of customers. It's what we do for each other. I mentally rearranged her booth all day long, too.

Notice the two green-covered walls behind my table. Also notice they are a foot taller than the ones behind me. I had the legs made that way because the bottoms of the walls do me no good when I am displaying cards, and I wanted the walls to stand higher so I could use all of the available space. Of course THIS time they were just being used as backdrops. 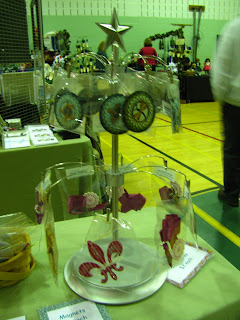 Check out my card holder. This is a Christmas Card display thingie that Lydia enabled me to purchase. I decided to use it to display my remaining book marks, magnets and decorators/ornaments. I like it!

Then the organizers came around and told me the next booth was a no-show, so I could expand into it. Yay! So I spread the walls open a little more and moved my card racks over a bit. I call this Set Up Iteration #2: 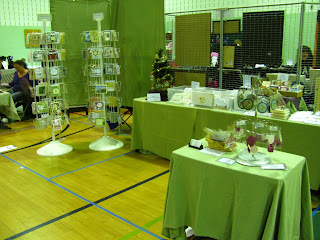 Notice how I am past that blue line there on the left, now. Also notice how that little table looks disembodied and out of place. For set-up iteration #3, I put that table perpendicular to the other tables, right along the right edge of my space, to form a corner.

Then MaryBeth thought I should move all the tables out to the front of the space, and I could sit behind them. We moved everything, and Iteration #4 came to be. And THAT, my friends, was the ticket! With the extra space for the card racks, it worked out perfectly! And no, I have no photos. I think I started to take one, but I got so busy I never did!

People came in pretty much all morning and traffic was fairly busy, yet everyone said it was getting nasty out. BUT THEY STILL CAME, and they shopped and we thanked them profusely.

Then we had some snow. Yes, real snow began to fall from the sky. See: 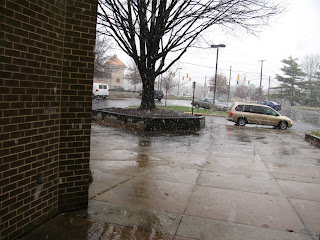 By this time, some of the vendors were packing up and leaving. SERIOUSLY! Who leaves one of the biggest shows of the year because of a little precipitation? The SHOPPERS were there, but some vendors were packing up as early as noon (the show was from 10-5). I registered an official complaint to the organizers, because it is really bad for the rest of us when vendors leave early. In fact, most shows have it written into the rules that if you leave early you will not be invited back. But they said it was okay because of the weather. Pttttht, I say to that! By 4:00 I was one of about 5 remaining vendors, and you know what? I made sales! HAHAHA! In fact, I had such a good day over-all, I'd be comfortable declaring it my best-ever one-day show! Just imagine if it had not snowed!

I sold all but about 10 of my Tea Bag/Candy holders; one woman bought 15, and another bought 10. Then two women (Mother & Daughter, I think) spent about 20 minutes picking out cards, and they eventually got up to 18! I almost hugged them. Right at the end, a nice gentleman came by, thanked me for being open still, and bought two ornaments and a Sympathy card. I gave him a third ornament out of sheer gratefulness.

By the time I left, we had about 2" of wet snow, and about 3" of melted slush in the street. I know this because I stepped in it when I stepped off the curb. MaryBeth gave me a ride to my car, because we had to park about 1/2 mile away from the venue, and by the time I got back to load up, I was the last one. Oh, well. With wet, squishy sneakers, I loaded up; I encouraged the helpers to actually help me carry stuff out to my car which shortened the re-load process a little. I finally got home about 6 pm. Now THAT was a 12-hour day! I think I went to bed around 8pm last night. Seriously.

This morning I unloaded my walls and card rack stuff at my storage unit. This was the first opportunity I've had all week to take a pic of my car in the daylight. 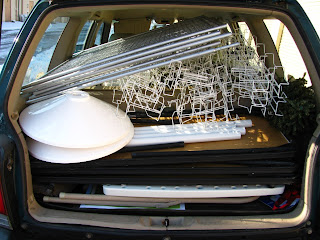 LOTS of room! I got the walls and the card racks out of there, and it looks like a normal car now! 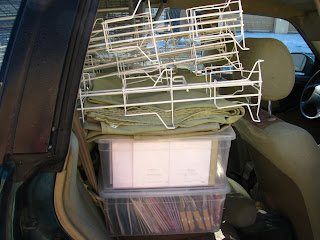 Once I get all of these boxes out of the back seat, I'll even be able to take the car to Michigan in a few weeks.

To celebrate the end of my Craft Show season, and the fact that I was out of the house and it was not raining, I went to Target and bought a few things I needed. This item was right next to the Milk Chocolate chips I needed for my Buckeyes (that's another story for another day), so I just had to get some! 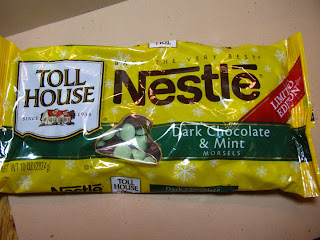 I dumped a bag of them into some brownie mix, and all I can say is:, "Get yourself to Target RIGHT NOW and buy these. HOARD them if you must!" OMG, this place smells heavenly right now.

I'm off to finish some laundry and be a little domestic for a few hours, then I think I'll go fondle and maybe even USE some of my new SU goodies.

Thanks for stopping by!
Posted by Leslie Hanna at 1:12 PM