Tonight has been one big hack job, so I'm splitting this post into two parts. First I bring you the non-stampy part, because right now, the stampy part is not going so well. But I digress.

For those of you who follow me on Twitter, you know I am crookedstamper. My avatar started out being my cat sleeping on my shoulder until one of my Tweeple sent me some pics of Captain Jack Sparrow to use instead. Why? Why, indeed. Caution: stream of consciousness follows.

So here I am, all dressed up for the holidays.

Oh, and may I just add that when I tried to change to this: 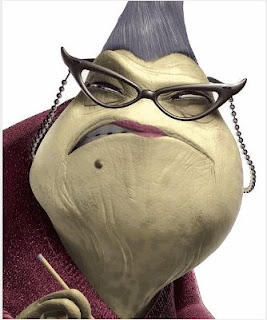 which is exactly how I was feeling at the time, I was almost booed off of Twitter until the Captain returned. Yeppers, I could not make that up. I love Roz, though. She makes such a statement just BEING there, ya know?

So now that I am forever The Captain (remember The Captain's Quarters, ergo The Captain's Table?), people think I like Johnny Depp. Well, okay, I like his characters, but personally, he does not do much for me.

THEN, this issue of People magazine hit the news stands: 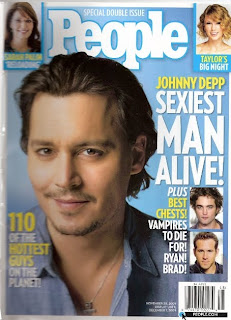 My Tweeple said I was the hottest thing alive! I AM NOT JOHNNY DEPP, Tweeps! So I changed my avatar, out of protest to JD being named the sexiest man alive, to Sean Connery, who, may I say, has aged quite well, if you know what I mean. Mmm-hmmm.

So I bought the magazine, and much to my wondering eyes should appear, look at this: 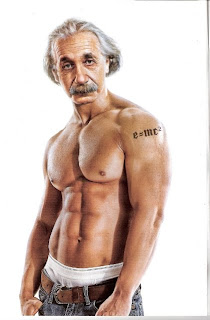 THIS, my friends, is the inside cover of the Sexiest Man issue. Oh, yeah! Is this not the BEST Photo Shopping ever?!?!? I want to FRAME it! THIS made the whole magazine purchase worth the money spent.

As for the rest of those people between the covers of the mag - I have never heard of about 95% of them, which is why I've pretty much stopped buying this magazine.

Oh, and on the page opposite that pic of Al were the words: Smart can be sexy, too. It's an ad for a GMC vehicle. I think whoever thought up this ad should be given an award. Not the Clio, because I think that's for commercials, but whatever the Print Ad award is, yeah, that one, they should totally get it. At the very least, the person deserves a BIG RAISE. (It is just so stinkin' clever ...)

Okay, did you catch the hack reference? Photo Shopping ... hacking .... okay, moving on...

I am still playing with the top of that box I posted yesterday. Still not happy with what I am creating as alternate tops. Once I get a little bit closer to a design that will not make my customers leave as soon as they arrive for this weekend's Stamp Camps, I'll post it as Part 2 of the Hack Job, because , well, just because. You'll see what that's all about when I post it.

That is all. Thanks for stopping by!
Posted by Leslie Hanna at 6:46 PM