We Got A Little Snow

We had a little bit of snow. We do not get much snow in the DC area - we get lots of ice, though. If it does snow, it's usually in February, not December. It's usually still 50 degrees in December. In fact, I think it was 50 degrees last weekend!

Saturday morning I was on schedule to leave for Michigan. I stubbornly decided I could deal with the snow and just planned to drive out of it. The patch of clouds on the weather map seemed to stop somewhere in PA, and I was headed West into OH and then North into MI. No problem.

I started out shoveling my front walk, like a good citizen. I'd arranged for my cat sitter to bring her son along to shovel the rest later into the weekend.

Even though it was still snowing, this does not look too bad, does it? 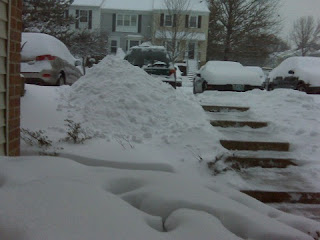 Bah, it's just a little snow! I showered, packed the car, calmed kitty, and hit the road.

About 3 miles North it started looking more like this: 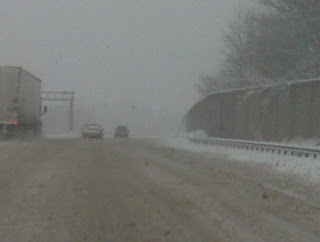 This is I-270, near Germantown, for the benefit of you local types. The 'I' in I-270 means 'Interstate', but does this major road look plowed to you? Nuh-uh. But I was OKAY with that, since I only needed to go about 30 miles up to Frederick and pick up I-70 West. 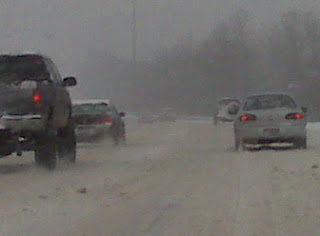 DO YOU SEE ANY PAVEMENT? I did not. It was snowing and not well-plowed and if I exceeded 40 mph it was slippery. We were all driving with our flashers on, as we were all going under 45 mph. There were some yahoos passing on the left, and there were also some yahoos in the ditches and medians along the way.

A lot of the time it looked like this: 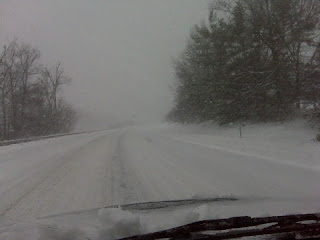 ... which was fine with me, since I was pulling over the best I could ever few miles to stop and clean the ice off my wipers so they'd actually WIPE.

It took me almost 2 hours, but I made it 45 miles to Hagerstown, exited the "expressway" and pulled into my usual coffee-and-potty-stop McDonalds. Ach, I said, ach - it's just a little bit of snow, right? So I got back on the highway and kept going. I almost did not make it to the next exit. I could not even SEE out the windshield. I stopped in a parking lot and called my Brother to tell him I was not going to make it. Then I called my Son and told HIM I could not make it. Then I turned around and headed home, and I arrived around 1:30.

This is what I came home to: 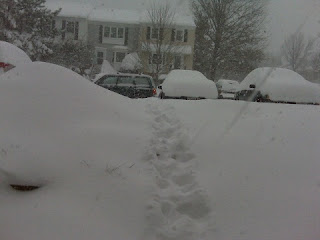 Those are my footprints in the snow, coming down my steps (remember those steps?) so I could get my shovel. That's my car parked perpendicular to my parking space - flashers still on. I had 10" of snow in my spot that needed to be removed before I could back the car in. I only took out what needed to be tooken out to get the car mostly into its spot. I am no fool. The snow was still coming down hard, and I knew it was not over. Get her in and get inside.

I did, and kitty stuck to me like glue the rest of the day.

This morning, I awoke to this: 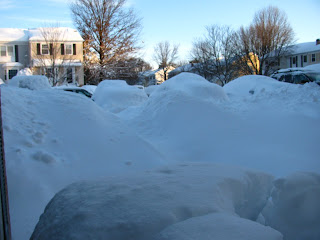 There is a bush right next to my front door, and I included it for perspective. Lotsa white, huh?

I shoveled my way up my steps: 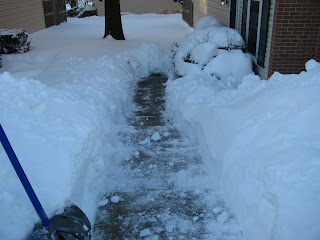 ... and turned around to assess the vehicle situation. This is the Miata: 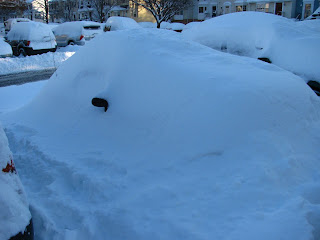 I shoveled my way to the front of my car, but this heap of plowed stuff? Third time? Not going to do it. I AM NOT. 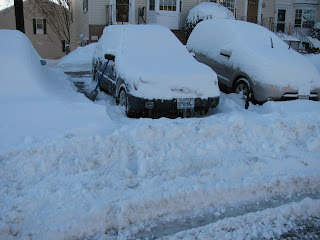 I have a neighbor with a plow on the front of his truck. See HIS spot? --> 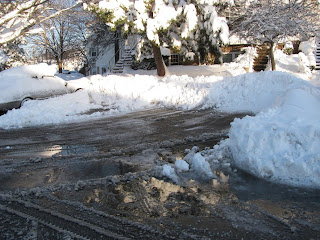 If *I* had that plow, I'd plow all that City-truck-plowed snow from in front of my neighbors' vehicles. But he is not me.

Oh, look, I guess the Miata is REALLY not going anywhere any time soon: 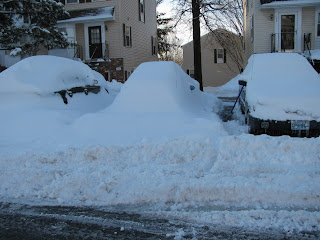 My right arm already feels like it's going to fall off, so I made the decision to not dig out the front of my car. If I cannot hire someone to do it for me, I may not ever leave again. It will melt by Spring.

ETA: The maintenance guys were coming around putting down sand, and another neighbor stopped them and asked if they spoke English. One said yes. So she asked him if she could pay him to shovel her steps and front walk. He just smiled. Speaks English - uh-huh. I pointed to my shovel and made the universal 'money' motion with my glittened right hand (you know, rubbing thumb and forefinger together?) He smiled REAL BIG and followed her. Yeah, money talks.

Then this little fella came home from his walk: 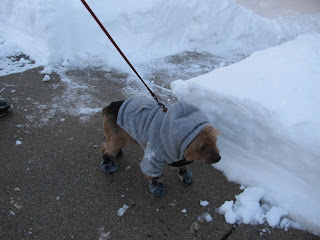 This is my neighbor, Jake, who lives upstairs from me with his humans. Nice hoodie and boots! Jake hates the snow on his feet.

This is one of my other neighbors and her human: 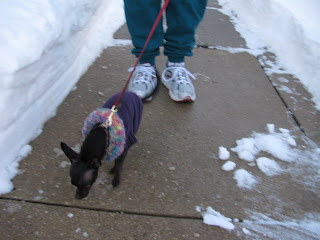 She is a wiggler, but she was wearing a nice purple frock! Little MinMin just lost her sister, and her Mom is going to adopt another pup as soon as she can. Her Mom also has a 19 year-old son who will come dig me out as soon as he returns home from work this afternoon. Yay!

Thus ends my tale of woe. Kitty and I have assumed the slug position once again: 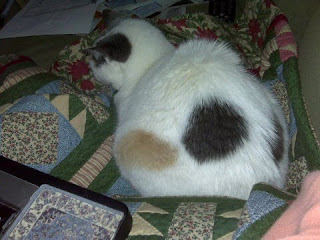 ... and plan to vegetate the rest of the weekend. I may put on real clothes and walk across the street to buy some food, but then again, maybe not. I have a potato I can call dinner.

I feel another nap coming on. Thanks for stopping by!
Posted by Leslie Hanna at 9:44 AM