The Cutest Dinosaur EVER!

The owner of my LSS is a gold-medal enabler. Sigh. I had just successfully NOT purchased several MFT dies and stamp sets because I didn't neeeeeeeeed them, but what did she do? She GOT THEM ALL IN STOCK and PUT THEM ON A DISPLAY with CUTE CARD SAMPLES and they were RIGHT INSIDE THE DOOR and THERE WAS A CROWD and WHAT WERE WE TO DO?!?!? We even whined to each other about the trauma as we selected all the stuff we had just successfully NOT purchased online. We were doomed.

One of the sets (yes, I bought several) has this cutie-patootie dinosaur and some awesome sentiments. Here's one of them: 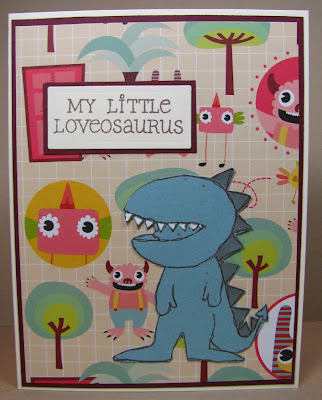 You've seen this paper recently, and I disappeared the rest of it making these three cards. 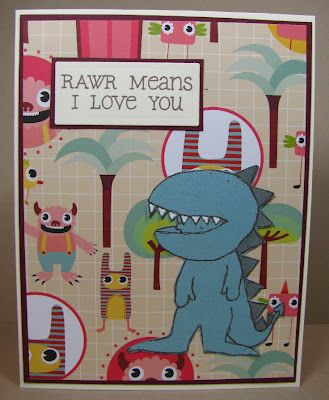 I love his teef.

And lastly, here is a normal sentiment: 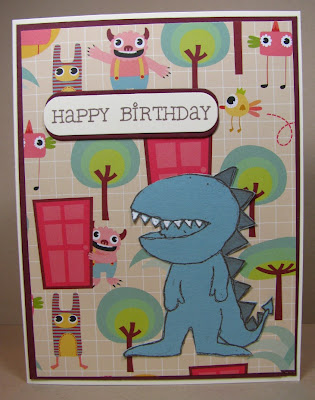 A little sad story about these dinosaurs. You'll notice they've been cut out, and that would be by yours truly. I must confess these were the second round of dinos, as the first one taught me many lessons. (Oh, I just noticed I should have colored their tongues. Oh, well.) I first stamped them on vanilla and intended to color them with a blue marker. I stamped and cut out three vanilla dinos and started coloring. I destroyed the first one when I'd decided Baja Breeze was the right color blue, and then I made his head look diseased, and in an effort to fix it I colored over it and made it too dark, and then he looked dead, but just from the neck up.

The second dino died when I tried a Copic (alcohol) marker instead of a dye ink marker. Better, but he still looked a little sickly. I was 0 for 2. Poor dino #3 had a severed tail, so I left him alone - he was in enough pain already.

Then it hit me- DUH, if I wanted blue dinos, why not stamp them on blue card stock. I am so smart. Not. So I stamped three more and cut those out, and all I colored were the teef and the spikes. I used brown on the spikes, but since it's on blue, they look grey, but I'm okay with that. I would have been okay with just about anything at that point, as the thought of cutting out three more dinos was making me a little crazy(ier).

Anyone who says we don't suffer for our art has never tried fussy-cutting. Ugh. I actually tried them on a die-cut oval. but they are too big and didn't look right, so fussy-cutting it was.

I have several more MFT stamps that need to see ink, plus some Taylored Expressions stuff that I need to initiate, so you'll see some more later this week. Oh, and can you say "creative avoidance"? I have yet to make my first card for my March Stamp Camps. Oops.

Thanks for stopping by!
Posted by Leslie Hanna at 7:56 PM