For those of you not in the techy biz, I-D-10-T is a joke among some Helpless Desk staff when given as the problem code to a hapless caller. But last night I used it in reference to myself. I did.

So last night I posted some cutie-patootie dinosaur cards, and my bloggy and Twitter pal Mary Dawn pointed out a grievous error I'd made. In my post I muttered that I'd forgotten to color the dinosaur's tongue, and she pointed out it's not a tongue at all, but rather the head of a small child - as in "wearing a dinosaur costume", not as in "the dinosaur ate him". So I had another do-over: 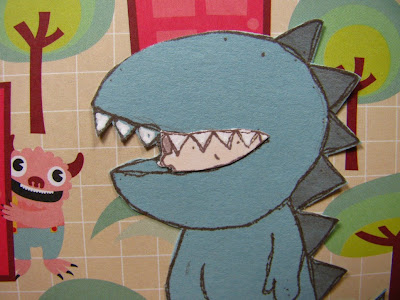 I also had a major (MAJOR) mental shift, as I was thinking at least two of these cards would end up in the "Love" category, and the third one would be a good kid's birthday card. Nuh-uh. Do YOU think this is a Looooove card? Look at it now: 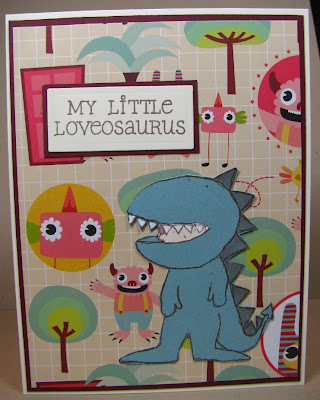 Nope. HOW DID I MISS that this is a kid in a dinosaur costume?!?!?

Here's the other Loooove card: 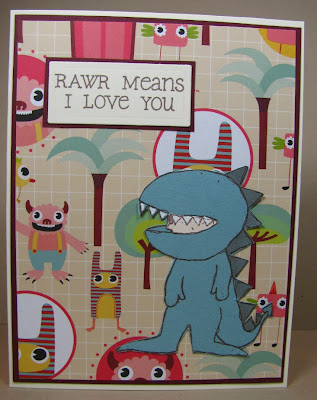 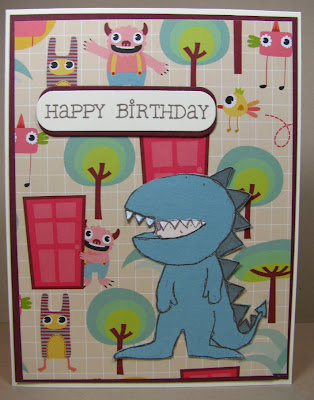 And when I whined to Mary Dawn about having to cut out all those teef again, she pointed out they were white, as was the patch I'd be puttin on top of them, and I didn't need to cut them out.

I plead extreme fatigue. I do. But it's all better now. Well, except for the fact that I have no idea what kinds of cards these are. If you have a clue, please let me know.

Thanks for stopping by!
Posted by Leslie Hanna at 6:26 AM