Today's blog post is brought to you by my tired brain and some VSN inspiration. There were a few VSN challenges yesterday that interested me, and I'd planned to work on them today. I actually started last night, and it just bled into today. Hey, when you have a clue, you go with it!

Before we get to that, I offer you a card I call "From the Ashes" because it was created from 5 (FIVE) cards from my UFO pile. Here's the card: 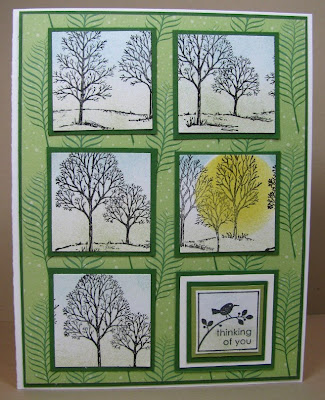 A while back I'd tried to CASE a card to use in my Stamp Camps, but I failed. I failed 5 times, and had 5 cards in my UFO pile. Last night I decided to (1) rip off the backs of the cards to put into the Remnant box, and (2) salvage the fronts, somehow. I punched a 1 3/8" square of the trees from each card, giving me 5 squares that I then mounted on Garden Green (from the Remnant Box). That left me with a spot to fill on the bottom right.

I took a 1" stamp from my Cute by the Inch set and just started layering it until it was the right size. Done! The DSP is from the Island Oasis SU paper set, and I have at least three packages of the stuff. That's one of the down sides of being a Demo. If you plan a project using one piece of paper, and a pack only has 2 sheets of that pattern, you need to either (1) plan a different project, (2) Plan a modified project using smaller pieces of the paper, or (3, my choice) buy a bazillion packs of the stuff. Problem is I have all that other paper left over, and it collects. I actually think it spawns when I'm not looking.

Next up, I bring you several VSN-inspired cards. I call them VSN-inspired because to qualify for VSN they need to be completed in under 45 minutes, and that did sooooo not happen here.

I was taking a Twitter break last night, letting my VSN brain cool down, and one of my tweeps posted some Hero Arts flowers stamped and embossed on vellum. She's done this to me before with this card, at which time she enabled me to buy that stamp set, so I had to use it. (Hi, Libby! *waves*) 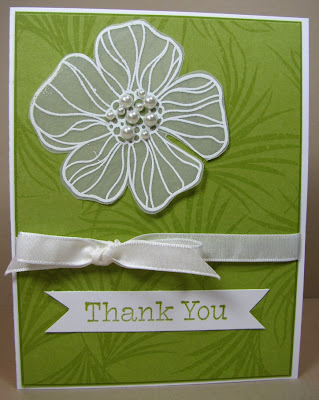 There's more of that Island Oasis paper because it was out. The sentiment is also from Hero Arts.

Okay, I'll admit this card doesn't look like it should take more than 45 minutes to make, and I thought I could pull it off, but then *I* am in that mix, so, um, no. First, I never stamp just one of anything, especially if I'm going to the trouble to heat-emboss it. So I stamped 6 of this flower, embossed it with SU detail white EP, and ... I think maybe one of them came out okay. One. So I did it again. Got one more. I whined.

Libby suggested the beauty of this flower is you can cover up all sorts of boo-boos with BLING! I tried, and I failed. So I embossed SOME MORE, plus I included a few other images from the set while I was at it. The image above is the best of that bunch. So good, in fact, I didn't pile on the pearls ... I left some space so you can see the detail in the flower's center.

Here is the other flower I made using two other images in the set: 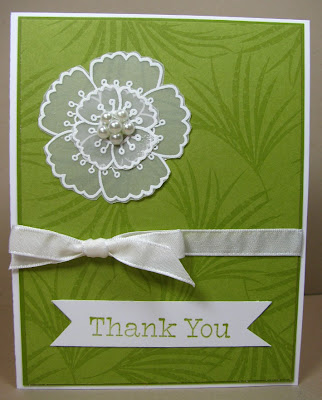 This one I also stamped about 52 times, and only got 4 decent embossed images. Apparently I've lost my embossing skillz, which means only one thing: I need to do more of it! MORE. Maybe even for my April Stamp Camps. :)

For the center of this one, I used a technique I learned in a class I took from Jennifer McGuire. I made a circle of pearls, then put some Crystal Effects in the center to hold the top pearl. They look piled on, don't they? But there's just a glob of CE under that center pearl.

The next VSN-influenced item was a prompt for "red dress". Since my die is still missing (LOST!), I had to move to Plan B, which I knew would take me hours. Many moons ago I made this card with some stamps the original post-er enabled me to purchase from England! Here's another card I made with stamps from the same set. In hind-site, last night I should have made something like this one and actually completed the challenge, but I digress.

So this morning, I set out to make a red dress using some embossed fan parts. Here's what came out: 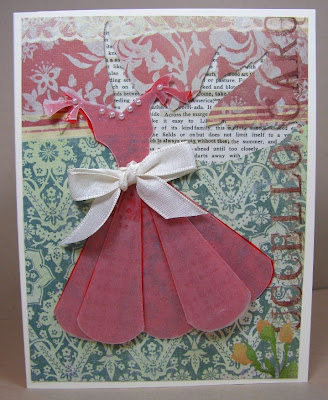 This card actually did take HOURS to make. First I embossed 6 of the fan parts on red vellum, clear-embossed them and cut them out. They were really red, so I stamped and clear-embossed six more on white vellum, cut them out, then layered them on top of the red pieces to mute the GAH red. Much better.

The top of the dress is the top of a stamp from Renaissance Art Stamps that I also embossed on white and red vellum and cut out. The pretty background paper is from a pack of 7 Gypsies Victoria papers.

You can see how bad I am with adhesive and vellum. The reason there is a bow at her waist is to hide not only the seam where the dress parts meet, but to attempt to hide some of the adhesive on the dress' fan parts. I failed. To make myself feel a little better, I added some tiny pearls (SU) around the neck line to distract you.

I opted for no sentiment, because I think this would make a good Any Occasion card. Plus, where would I put it?

That's it for now. I think I'll go focus on projects for my March Stamp Camps.

Thanks for stopping by!
Posted by Leslie Hanna at 12:06 PM