Heh heh ... got your attention, did I? This card is another one of those "what was I thinking?!" efforts, that you don't know is so bad until you get started, and then you're so stubborn you can't stop, and it takes you 3 hours to make one card and you swear you'll never make another one, and it took you 3 hours so it must be a $10 card. Yeah, one of those. Here it is, then I'll explain: 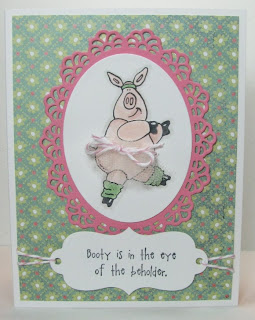 First of all: all scra ... er, remnants, and yes, I am very proud. The image and sentiment are my last two uninked Hambo stamps from my HYCCT gift certificate. I tried really, really hard to not use any pink, but I got this image because it was a pig, and pigs are pink, so ... I had to. But I chose a background paper that was mostly green, and used as little pink (gah) as possible.

The floofy oval die is one of my new and now used MFT dies from a release or so ago, and the white oval is a Nestie that perfectly fit both around the pig and inside the pink layer to cover up a lot of the (gah) pink. WIN!

Here's the sentiment up close and personal:

So I had this idea to use a piece of the 1/8 yard of Tulle I bought a while ago as the pig's tutu. I thought I'd gather it and tie a piece of baker's twine around it. I know how to sew, and all you do is run a needle over and under, over and over again, through the fabric and then you can gather it along that thread.

Well, thread is not baker's twine, or should I say baker's twine is not thread. Oh, it wove all right, since I used a big-eyed needle. However, the attaching part became a challenge. I poked holes on either side of where her waist would be, and it took me a while until I came up with a wrap that worked to both hold the Tulle in place AND let me tie the bow. I still had to go back and put a glue dot under the bow to hold it in place.

AND, because of this hair-brained scheme to use the Tulle, I had to use a marker to ink the pig, since her arm would have been in the way of the tutu, so I had to not ink that part of the main image, then had to stamp the arm separately. The very last thing I did after finally getting the tutu to stay in place was to cut out her arm and stick it onto the image at an angle other than would have been stamped. 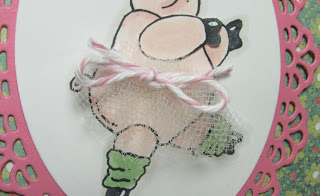 I'm pretty sure, now, that anyone who read this far wonders why (or how) I ever manage to make a card, much less more than one of them. It's not always pretty, people. Stamping can be HARD, especially if you are me, which right now I'm fairly certain you're glad you are not.

So that's my second card today, and I'm pretty wiped out from the exertion.

Tomorrow morning I get a massaaaaage, then I hope to stamp again. No Tulle will be involved, I can promise you that much.

Thanks for stopping by!
Posted by Leslie Hanna at 8:12 PM