I finally opened my new Paper Smooches stamps last night and used the crab, which was the main reason I bought this set (other than the critters are all STINKIN' CUTE!) to make this: 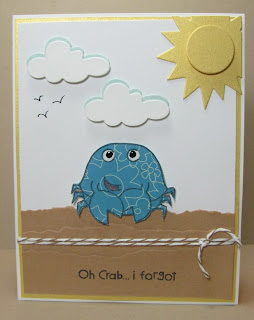 ALL. SCRAPS. Did you know a crab is not red until it's cooked? Well, except for the red crab, but here in Maryland crabs are blue-ish when alive, so mine is blue. Plus, I had a scrap of blue paper out on top of The Heaplet, so, you see, I had no choice.

This is your pretty standard beach scene, except I forgot the ocean, so he's floating on air with his paws claws in the sand. The sand is torn Creamy Caramel card stock. The clouds are two layers - white and some SU blue DSP scrap. The yellow is very shiny mystery card stock. Clouds are an A Muse die; sun is MFT. Birds by moi, drawn with a black Memento marker.

The eyes. Well, his eyes started out blue, like his body, so I colored them with a white gel pen, but the pupils disappeared, so as soon as the white part was dry, I added Ranger glossy enamel black dots. They started out smaller than what you see here. It was kindof like cutting your own bangs ... a little more here, a little more there ... until the black spots were almost as big as the white parts of the eyes. I finally declared them "even enough" and let them dry over night.

Well, who know I could say so much about a little blue crab? I personally think he's charming. :)

Happy Almost Friday, people!!! And thanks for stopping by!
Posted by Leslie Hanna at 7:30 AM